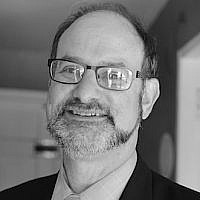 The Blogs
Jeff Rubin
A writer in the Baltimore-Washington area.
Apply for a Blog
Please note that the posts on The Blogs are contributed by third parties. The opinions, facts and any media content in them are presented solely by the authors, and neither The Times of Israel nor its partners assume any responsibility for them. Please contact us in case of abuse. In case of abuse,
Report this post.

A diminishing number of us remember the bad old days of 1967 and 1968 when our cities were alight with riots and rage. I was in elementary school on April 5, 1968, when a black classmate informed me that my mixed Boston neighborhood – comprising African Americans, Irish, and Jews – would be burned down that night in retaliation for the assassination of Dr. Martin Luther King, Jr., the day before. It wasn’t an idle warning: The city was still recovering from the violent summer of 1967.

Faced with an expected explosion over the King assassination, Boston’s young mayor, Kevin White, just four months in office, was determined to avoid the mistakes of his predecessor whose heavy-handed tactics had fanned the flames. Working with a new African-American city councilman, Thomas Atkins, police officials, and community leaders – with an important assist from the “Godfather of Soul” himself, James Brown – White minimized the damage. Boston escaped the widespread destruction that befell so many other cities.

Today’s violence brings back searing memories of those terrible days. It is all the more tragic today, a generation later, when many of those urban areas are in various stages of revival, with growing populations of all races and burgeoning economic opportunities. Our communities are more integrated than they were 50 years ago and the list of African-American “firsts” rarely amazes us after the greatest “first” of all, our first black president. In many ways, we have healed.

But remembering ’67-’68 also helps us to see how far we have fallen short. In February 1968, the presidentially appointed Kerner Commission reported on the summer’s urban unrest and concluded, “[O]ur nation is moving toward two societies, one black, one white — separate and unequal.” It urged “national action — compassionate, massive and sustained, backed by the resources of the most powerful and the richest nation on this earth.”

Today, the U.S. can elect an African-American to the White House, but a black man still cannot walk down the street without fear.

Today, the U.S. can elect an African-American to the White House, but a black man still cannot walk down the street without fear.

America’s racial injustice has been studied for decades and the solutions made clear. Sadly, many of those recommendations have been ignored, tabled, or reversed. And, despite the drumbeat of messages, marches, legislation, and media images, we have yet to internalize love for our neighbors. It shouldn’t take government intervention to know that it is wrong to hunt down a jogger or asphyxiate a helpless man. We have not replaced systemic prejudice with systemic tolerance, knee-jerk violence with reflexive compassion. We will not fulfill America’s national ideals until every American expunges hatred from their hearts and learns to see one another as brothers and sisters.

How do we move forward?

First, it goes without saying that responsible community leaders must come together to deescalate the violence, support peaceful protest, and unite the country. Beyond that, we must enforce the laws that apply to and protects all Americans, those in government and everyday citizens, those on the political left and right, minority members and everyone else.

Second, let us not fall prey to the “conflict narrative” that enables demagogues to inflame passions and the media to sell advertising. It is an unsexy fact that most Americans – of all races — are not causing mayhem; they are trying to get by amid a global pandemic. It is also true that as flawed as this society is today, it is far better than it was a generation ago. By harping on conflicts while ignoring successes, we create a vacuum for naysayers and provocateurs to fill for their own ends.

Third, in the longer term let us take a hard look at a U.S. education system that overemphasizes tests and may underplay the lessons of tolerance. Is it creating Americans steeped in the country’s founding ideals who will become exemplary citizens and not just exemplary workers? Where has this education system failed that too many Americans cannot observe fundamental rules of decency, or to distinguish truth from falsehood?

On the night after the King assassination in 1968, Boston Mayor Kevin White – who was elected over a race-baiting former school council member — had the creativity, intelligence, and empathy to permit a James Brown concert to proceed and even to pay for its broadcast on television. His move helped save the city. Addressing the Boston Garden concert crowd that night he said, “Twenty-four hours ago Dr. King died — for all of us — black and white, that we may live together in harmony without violence and in peace… I’m here to ask you to stay with me… and to make Dr. King’s dreams a reality…” The message still resonates today.

About the Author
Jeff Rubin is a writer in the Baltimore-Washington area.
Related Topics
Related Posts
Comments