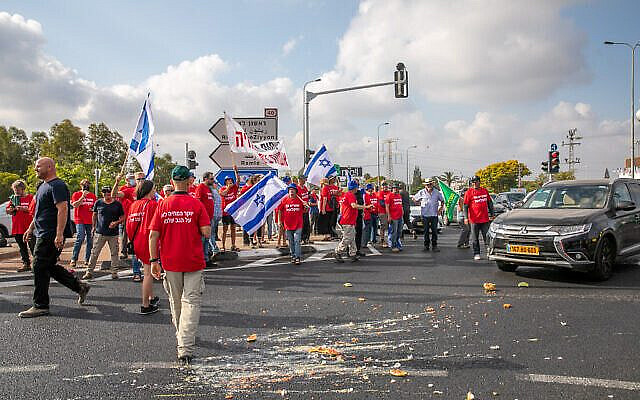 Farmers and manufacturers, the people who built the modern state of Israel on their labor, are extremely angry, and justifiably so. Last Thursday morning, Israeli traffic across the country was brought to a standstill, a feat accomplished by farmers nationwide who dumped unsold produce on the country’s highways. It is not hard to understand their anger, Israel’s working class has been sold out by her government, moving in the newly proposed budget to outsource manufacturing and agriculture to Europe, earning some quick pocket change for Israel’s largely rootless cosmopolitan class leaving Israel’s domestic industries and laborers in ruin.

Yamina’s Naftali Bennett and Matan Kahana, Yesh Atid’s Yair Lapid and Orna Barbivai, and Yisrael Beteynu’s Avidgor Liberman and Oded Forer; the Sellout Six. These esteemed members of Knesset are the main players of this great betrayal, the central orchestrators of the destruction of Israel’s working class. Together, they are pushing this proposed budget, which includes; the drastic reduction of quotas and limits on the importation of foreign produce, the adoption of European produce standards to ease foreign importation, and the radical handicapping of the Standards Institution in order to import cheap foreign goods across the board.

Free market capitalism, on display in this budget, is terrific at driving down value, not just the value of eggs and toothpaste but the spiritual value of a nation. It is deeply unhealthy for a nation to consume foreign goods, to eat by the fruit of another nation’s labor. It is deeply unhealthy for a nation to sell out its backbone, its working class, for cheaper foreign goods. Moreover, it is dangerous, it strips Israel of its economic independence in the face of an uncertain world.

The aforementioned “sellout six” all belong to the same elite, the rootless cosmopolitan bourgeois who care little for their nation, its laborers or its spiritual wellbeing and much for cheap goods and low-cost workers. They identify more with the global vanguard than their own countrymen, more with Amsterdam, Berlin, and New York than Hebron, Beersheva, or Tiberias. These elites will be largely unaffected by the destruction of the working class who will not be able to enjoy buying avocados and televisions for shekels less than they would otherwise.

The pockets of the working class will be empty as they watch the elite bathe in cheap foreign goods, spare for memories of paychecks from jobs shipped elsewhere, while the same elite regale them with promises that the money will “trickle down” in due time and chide them, demanding they “learn to code.” All the while, the soul of the nation will deteriorate, a nation cuckolded, living wholly by the fruit of another’s labor, totally dependent, a subordinate vassal of the world community.

Complicit in this betrayal of the working class are the rest of the government’s faction heads; Benny Gantz, Gideon Sa’ar, Nitzan Horowitz, and, above all, Merav Michaeli, the head of the Labor Party, who, at one point, at least pretended to advocate on behalf of Israel’s laborers. This budget is the culmination of Labor’s transformation, a punishment against the working class voters who abandoned them and an embrace of the cosmopolitan Meretz-lite base they have clung to for survival.

Bennett, Lapid, and the coalition are trying to sell Israel’s working class, economic independence, and integrity for shekels. This, if nothing else before it, is disqualifying. This government must fall, and if this betrayal is not enshrined in law by the budget deadline on November 4, it will. The opposition must work with renewed strength to defeat this budget, save Israel’s working class, and end this nightmare government. Once that is done, the right must embrace the working class and her interests, the strengthening of domestic industry and economic independence, so that it may turn eggs on the highway into votes for the right.