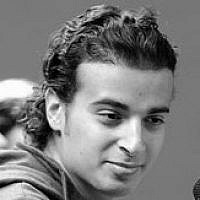 The Blogs
Maikel Nabil
Apply for a Blog
Please note that the posts on The Blogs are contributed by third parties. The opinions, facts and any media content in them are presented solely by the authors, and neither The Times of Israel nor its partners assume any responsibility for them. Please contact us in case of abuse. In case of abuse,
Report this post.

After the Egyptian military took power in the country 1952, it started its campaign against Egyptian Jews, launching its propaganda against Jews in all the state-owned media. It freed all the terrorists who had committed violence against Jews before the coup, and jailed liberals and seculars instead. It encouraged aggression toward the Egyptian Jewish minority, which led to new terrorist attacks against Jewish individuals and properties in Egypt.

Between 1954 and 1956, 80,000 Egyptian Jews were expelled from Egypt, but not before they were robbed of their property. After that, Egypt revoked their citizenship, forbidding them from returning to their homeland. Of course, before they left, Egyptian authorities forced them to sign papers saying that they had been treated fairly and were leaving of their own will. There are currently around 300 Jews living in Egypt, isolated in an environment that is hostile to them.

The Christian minority in Egypt (known as Copts) reacted in a very selfish way at the time, choosing not to interfere in the crisis so as to avoid any harm. They thought that if they took the side of the dictatorship, they would be safe. Obviously, it didn’t work.

After the Egyptian military expelled Jews and outlawed Bahais and Shias, they started their campaign against Christians. The Egyptian regime has maintained since that time a very fundamental understanding of Islam, and forced it through the media and the education system. Violent attacks against Christians became increasingly frequent, and most of the time no one was prosecuted.

The Egyptian regime created an uncomfortable situation for Christians in order to force them to leave the country. And the evidence shows that it worked. Some 4 million Egyptian Christians have emigrated from Egypt over the last 60 years, representing one-third of the entire Coptic population, and comprising nearly 75% of Egyptians living abroad.

But Egyptian authorities are not satisfied with that. After Mohammed Morsi acceded to power, he decided to speed up this process. The Egyptian regime used the film “Innocence of Muslims” to start a huge propaganda campaign against Egyptian Christians. And of course, Christians in Egypt are becoming increasingly isolated under this propaganda. Violence against Christians occurs every day, and the state usually takes the side of the Muslim murderers.

It isn’t inconceivable that as a way of protecting this operation, the Egyptian state sponsored the attacks on foreign embassies. A group of poor thugs were paid and led to the American Embassy in Cairo to attack it, while they didn’t know where they were, or why they were there. Similar attacks occurred in other countries in which the Egyptian Intelligence has power. Not a single attack on a foreign embassy occurred outside the sphere of Egyptian influence. But Western countries cared more about their own interests in Muslim countries, and as usual surrendered to the racist blackmail of the Egyptian regime.

The Egyptian state is also excessively using the laws forbidding criticism of Islam. At least five Christians are now imprisoned in Egypt under the accusation of “insulting Islam.” Ayman Youssef Mansour, a 22-year-old blogger, was sentenced in October 2011 to three years because of comments about Islam on his Facebook page. Gamal Abdou Masoud, a 17-year-old kid, was sentenced to three years’ imprisonment last January because he was tagged on Facebook in a picture that criticized Muhammad, the prophet of Islam. Makarem Diab Said, a teacher from Asyut, was sentenced in April 2012 to six years’ imprisonment, because he said some aggressive words against Islam during a quarrel with one of his colleagues at work. Bishoy El-Beheri was also sentenced this September to six years’ imprisonment on two charges: insulting Islam, and insulting Morsi, the new president.

But perhaps the most poignant is the case of Alber Saber, a 27-year-old atheist from a Christian family. He was a hyperactive person since before the revolution. I first met him after I was released from prison last year. After that, he repeatedly asked me to launch a big campaign in Egypt to spread secular ideas. He was super-active on social media, criticizing religion and promoting atheism. Alber was arrested on September 13, and is now being tried under accusations of “insulting God” and “insulting Islam.” We are leading an international campaign on Facebook and Twitter calling for his freedom, in the hope that people will realize that dictatorships never stop. As long they exist, there will be new victims every day, and this new victim can be anyone.

The aim of the Egyptian regime in using this charge against Christians and atheists from Christian background is to create a status of panic and intimidation among Christians and to make them leave Egypt. Obviously, it’s working. Tens of thousands of Egyptian Christians are leaving their homeland every month, and Western countries are opening their doors to them in the knowledge that they could soon face genocide in their country.

Will Egyptian Christians face the same destiny as Egyptian Jews? Will the Egyptian regime manage to get rid of Christians and other minorities? Do the Muslim Brothers want to exclude Christians from the voting process because Christians usually vote for secular parties? Will Egypt lose more and more of its diversity? Only time will tell.

About the Author
Maikel Nabil is an Egyptian activist, and the leader of the “No for Compulsory Military Service Movement.” He became the first conscientious objector to military service in Egypt in 2010, then the first conscious prisoner to boycott military trials in August 2011. He spent 10 months in Egyptian prisons last year (including 130 days on hunger strike) for defending human rights, and is nominated for the next Noble Peace Prize.
Comments