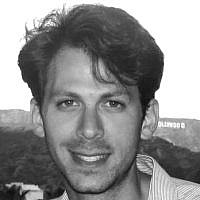 The Blogs
Johnny Green
Tinker, Tailor, Soldier, Spy
Apply for a Blog
Please note that the posts on The Blogs are contributed by third parties. The opinions, facts and any media content in them are presented solely by the authors, and neither The Times of Israel nor its partners assume any responsibility for them. Please contact us in case of abuse. In case of abuse,
Report this post.

In his May 31 Op-Ed in the New York Times, titled “Israel’s Charade of Democracy”, Hagai El-Ad attempts to illustrate the contradiction between Israel’s image as a liberal democracy and its occupation of the Palestinians. Instead, he manages to demonstrate one of the major flaws in the way a growing group on the left perceives and portrays Israel – a flaw that cripples the effectiveness of any genuine criticism. While much of his description is correct and important, El-Ad misleads by omission, distorts by assumption and deceives by simplification, calling the sincerity of his critique into question.

The gist of El-Ad’s Op-Ed correctly identifies the greatest grievance suffered by the Palestinians. In simple terms, the Palestinians are not their own political masters; their ultimate fate is in many respects determined by those they did not elect, and thus they lack a crucial element of control over their lives, political control that we in Western society have come to see as a basic and fundamental form of freedom. There is no form of occupation, however cooperative or benign, that can avoid this reality and its consequences. Yet these very same occupying masters consider and describe themselves as liberal and democratic; and few can disagree that Israel indeed adheres to most democratic principles in any context outside the occupation of the Palestinians. Surely there is a manifest inconsistency within the democratic occupier.

El-Ad’s glaring omission begins with the complete absence of the circumstances surrounding the occupation, from its inception to its continued existence. One need not launch into an exhaustive historical account in order to provide a modicum of perspective. El-Ad asserts Israel’s “violence against history”, but neglects to even consider the background and complexity of the Palestinian-Israeli conflict. Is it truly unthinkable that a democratic nation is drawn into an occupation? Is it so inconceivable that the same democratic nation has trouble finding a way out?

Remarkably, while condemning the occupation’s “un-temporary” character, El-Ad omits the part the Palestinians play in its perpetuation. In 2000 and again in 2008, Israeli governments offered the Palestinians far-reaching proposals to resolve the conflict, proposals that were summarily rejected. In the words of President Bill Clinton, in his 2005 autobiography, “My Life”: “[Israeli Prime Minister] Barak’s cabinet endorsed the parameters with reservations… It was historic: an Israeli government had said that to get peace, there would be a Palestinian state… The ball was in [Palestinian Authority President] Arafat’s court… Arafat never said no; he just couldn’t bring himself to say yes… Arafat’s rejection of my proposal after Barak accepted it was an error of historic proportions.”

El-Ad’s misleading portrayal of continued Israeli occupation neglects to consider Israel’s efforts in ending the occupation. The briefest mention of these efforts, if only as lip-service, would have lent the article a measure of credibility, yet El-Ad charges on as though they never existed. Is that not a charade?

Further, while referring to Israel’s recent elections, El-Ad assumes the irrational and vicious endorsement of the occupation by the Israeli public. El-Ad fails to acknowledge the natural logic behind Israeli attitudes towards ending the occupation, and his assumption distorts reality by ignoring important developments in the past decade – and their consequences.

In the 2005 “Disengagement”, Israel unilaterally ended its occupation of the Gaza Strip, and Gaza remains unoccupied to this day. Since 2005, over 11,000 rockets have been launched from Gaza into Israeli cities and civilian centers. Instead of building a sustainable, viable, productive society, the Palestinians created a quasi-terror-state on Israel’s southern border; instead of using the tremendous foreign aid granted to them to build a state, the Palestinians built underground bunkers and rocket launch-pads; instead of demonstrating to the Israeli public what they could look forward to, they warned the Israelis of what they could expect. Thus, Israelis are reluctant, now more than ever, to consider the idea of a Palestinian state in the West Bank, within miles of every single major Israeli population center. Is this so irrational? By assuming Israel’s malicious (and anti-democratic) intent, El-Ad distorts the complex reality of Israeli public opinion and the way Palestinian actions shape it. This is El-Ad’s charade.

Finally, as do many sharing his disposition, El-Ad simply refuses to admit to even the smallest trace of complexity in this ongoing conflict. To El-Ad, the fact that Israel is a democratic state in the heart of the Middle East is irrelevant; the nature of the 100 bloody years of the Israeli-Arab conflict is simple; and the tension between Israel’s democratic society and geo-political embroilment is irreconcilable. He does not burden us with practical solutions or suggestions – does El-Ad think it wise to unilaterally withdraw to the 1967 lines after the experiment with Gaza? Does he think it advisable that Israel propose a new resolution which perhaps, just this once, will not be rejected? Does he counsel to abolish the State of Israel? El-Ad offers little in the way of complex, practical and nuanced analysis, and much in the way of a grand, theatrical charade. Thus El-Ad seeks to deceive his readers by his superficial, simple-minded and inadequate portrayal of the inherent challenge and complexity of democratic occupation.

El-Ad’s charade is indicative of a familiar flaw – the insistence on viewing this conflict as a clear cut struggle between a brute aggressor and a weak victim, and the refusal to allow for even a hint of mutual acknowledgement. As this approach becomes more widespread, its adherents become further divorced from reality, less capable of meaningful influence, and ultimately cause the destructive polarization of surrounding discourse.

About the Author
Yonatan (Johnny) Green is the Executive Director of the Israel Law & Liberty Forum. He is a qualified attorney in both Israel and the State of New York. He was born and raised in Israel to parents from the US and the UK.
Comments