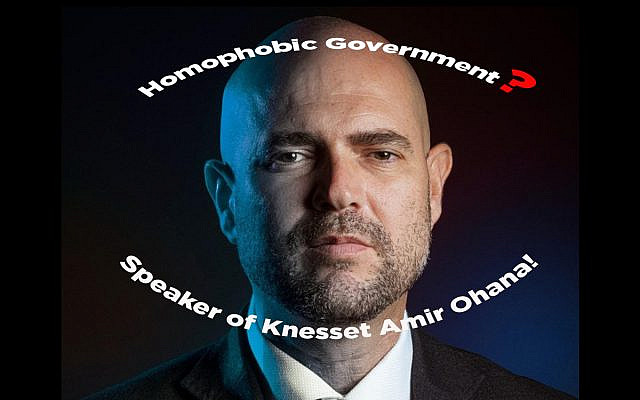 Amir Ohana, a longtime advocate for LGBTQ rights, was nominated for Speaker of the Israeli Knesset by Benjamin Netanyahu and supported by the entire Likud Party and its coalition partners in the new Israeli government.

The late American comedian Richard Pryor may have said it best: “Who you gonna believe? Me or your lying eyes?”

When it comes to Israel’s thriving democracy, it’s important to believe your eyes.

Israel’s new Speaker of the Knesset, the most influential appointment of a proudly gay lawmaker in the nation’s modern history, was supported by the entire Likud Party and its diverse secular and religious coalition partners. The handshakes, hugs, and congratulatory messages Amir Ohana received after Benjamin Netanyahu nominated and the Knesset elected him to this prestigious role says more about the state of affairs within Israel’s new governing coalition than a thousand misleading headlines.

The politicians who were vanquished from power in Israel’s recent elections will still tell you to ignore what your eyes can clearly see.

Sadly, many media pundits are all too eager to march along – fear mongering in their search for controversy as clickbait regardless of truth or consequences. Headlines and broadcasts trumpet alarmist threats to Israel’s vibrant democracy, to the freedoms and liberties that Likud has fiercely promoted and protected for decades, and expect you to believe Israel’s longest serving prime minister isn’t the same person who has given nearly his entire adult life to serve his country and the Jewish people.

While their tactics may have become more creative, the Israeli left’s refusal to accept their banishment by the majority of Israel’s passionate, informed electorate is a danger to Israel, the nation’s global relationships with friends and allies, and weakens the democratic principles that are the foundation of our shared values and vision.

In America, it is the far right that is most often labeled as election deniers. In Israel, it is the radical left.

The Israeli left’s vision to “Make Israel Great Again” is to return to a time when the liberal democracy was controlled primarily by socialist leaders and cronies who long raided the public treasury to substantially serve themselves, their friends, and their narrow agendas that left millions behind.

Amir Ohana’s famly were once among those millions left behind. His parents immigrated from Morocco. They were part of the mosaic of millions of Israelis whose parents and grandparents survived persecution as second-class citizens of Arab countries. They fled, some were ransomed, and returned to Zion to literally build the modern nation brick-by-brick. For much of Israel’s first 30 years, those Israelis were significantly ignored by the ruling socialists who believed they somehow owned the rights to power and influence in the reborn, independent state.

Building on a History of Success

The new Knesset Speaker was just one year old in 1977 when a revolution occurred in Israel. Menachem Begin was elected as prime minister. Begin, like his successor today, Prime Minister Benjamin Netanyahu, was scorned and castigated by opposing Israeli politicians; some of the media went so far as to label Begin as “a former Jewish terrorist.” Begin eventually won the Noble Peace prize, eliminated the nuclear threat of Saddam Hussein, and transformed the Israeli economy by liberalizing the old socialist rules.  It was during Begin’s years in power that those Israelis who came from Arab countries and were marginalized by Israel’s old European elite achieved economic progress and ceased being second class citizens.

Freedoms Protected in Israel Can be Death Sentence in Arab World

When Ohana’s parents celebrated Begin’s election victory in the first year of his life, they could never have imagined what the future held in store for their third son. That his husband and children would witness his swearing in as Speaker of the Israeli Parliament would have seemed nothing less than fantasy. In many of the countries surrounding Israel, the love he shares with his husband could literally lead to imprisonment or death. In Israel, his sexual identity is respected and protected as an inherent freedom.

The doom and gloom predicted of Begin’s first Likud government and similar pronouncements during Netanyahu’s record breaking 15 years as prime minister also turned out to be the fantasy of pundits and frustrated, failed politicians. Netanyahu is among the most recognized and longstanding political leaders of his generation, is widely respected for his skills and acumen, and has a resume of accomplishments that dwarfs every political opponent. 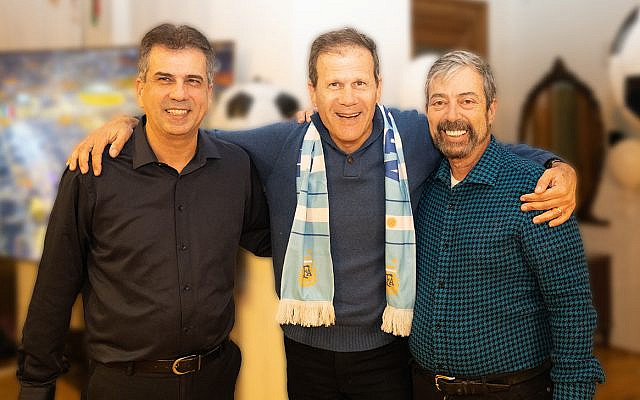 Less than three years ago, it was Netanyahu’s vision and relentless efforts that led to Israel’s historic peace agreements with Bahrain, the United Arab Emirates, Morocco, and Sudan. Expanding that circle to include Saudi Arabia will improve the lives of millions of Saudis and Israelis, and pave the way for generations of the Middle East to experience the tangible benefits of friendship, collaboration, mutual respect and acceptance.

Netanyahu’s new government will prioritize relations with all who share Israel’s yearning for liberty, freedom, peace, security, and prosperity for all G-d’s children.

Netanyahu’s friendship with President Joe Biden spans nearly half a century. These two leaders know and respect one another and have a unique opportunity to rise above the extremists and the failed paradigms of the past to create a legacy that will touch the world for generations.

The new Israeli government will also prioritize strengthening Israeli society and the institutions that are its foundation – ensuring all its citizens are able to experience their greatest potential for life, liberty, and the pursuit of happiness.

Unfortunately, in recent years many Israelis recognize that the nation’s law enforcement agencies have abused their authority and usurped extraordinary and undemocratic power.  Israelis have long looked to their closest friends such as the United States for models to help shape the future of Israel. Ensuring Israeli law enforcement agencies are responsive and respectful of democratic principles and ironically the rules of law is a complicated but necessary task despite the alarmist screams of interest groups whose grip on power and influence is threatened by a government of the people, by the people, and for the people.

Israel, like democratic governments throughout the free world, faces complex challenges to tackle inflation, reduce the cost of living, modernize and expand transportation, and improve access to affordable housing. Netanyahu’s new government includes leadership with a track record of success guiding the Israeli economy through periods of enormous challenge into an envy of much of the world. It’s not by accident that Israeli innovations have contributed to significant advancements in science, medicine, agriculture, security, and many other diverse fields across the globe. Those innovations go to the heart of the advantages Israel offers to every nation ready to join a circle of peace that looks to the truly limitless opportunities of the future as opposed to the follies of the past.

There is no greater challenge for the entire free world than preventing Iran’s ayatollahs from obtaining a nuclear weapon. The Jewish people tragically learned throughout history that when someone threatens you with genocide, we must believe them. We need no more evidence of Iran’s malign intentions and the reality of their terrorist ambitions than we’ve seen in Ukraine, Lebanon, Yemen, Gaza, Venezuela, within Europe, and even in the United States. Much of the world scorned Prime Minister Begin when he ordered Israeli forces to eliminate the Iraqi nuclear program in 1981. Today, we know Begin’s courage and example saved countless lives.

A Fanatical Regime Cannot be Allowed to Threaten the Free World

Israel will not allow Iran to obtain nuclear weapons; on that question, Israelis of all political affiliations are united. Israel will no doubt continue working closely with President Biden and others who are sincerely determined that the world will never be threatened or hijacked by a fanatical, terrorist regime that doesn’t hesitate to subjugate its own people and anyone else that refuses to surrender to its extremist ambitions.

Israel is and Will Remain a Light Unto the Nations

The story of the reborn State of Israel is one that inspires freedom-loving people everywhere. Israel is and will remain a light unto the nations.

Israel has reached out its hand in peace to all its neighbors for nearly a century. Those who continue to reject Israel’s overtures for peace have done little for the people they claim to represent. Since World War II, refugee crises across the world have been resolved through goodwill and compromise.

Moving Past the Tragedy of Rejectionism

More than half a century since Israel’s heroic victory in the 1967 Six Day War, many of its Arab neighbors have continued to embrace rejectionism. Their peoples need look no further than the facts of life within their societies versus Israel’s to recognize the tragic consequences of those decisions.

Israel will not give rejectionists veto power over the future of the State of Israel. The new government will urge the world community to stand with the people of Israel.

Those who single out Israel for scorn and criticism while remaining silent to daily atrocities throughout the region and much of the world are not lovers of humanity, freedom, or the democratic values shared by America and Israel. The new Israeli government and Israel’s friends throughout the world must work together to increasingly expose them for their hypocrisy and the hateful motivations that guide their malicious words and acts.

These are the values, priorities, and aspirations shared across Israel’s new government where Amir Ohana proudly serves in a leadership role.

Know Israel with Your Own Eyes

It’s important to know Israel with your own eyes. Do not be misled by pundits in search of clicks or politicians looking only to future elections. Be inspired by Israel’s passions and pursuits.

You Can Make a Difference

What difference will you make in tangibly creating the safer, saner, more loving world we know is possible?

About the Author
Seth Eisenberg is President of Purpose Built Families Foundation, a former At-Large chair of the National Writers Union, elected labor leader, and pro-Israel activist. He can be reached via LinkedIn at linkedin.com/in/setheisenberg/.
Related Topics
Related Posts
Seth Eisenberg