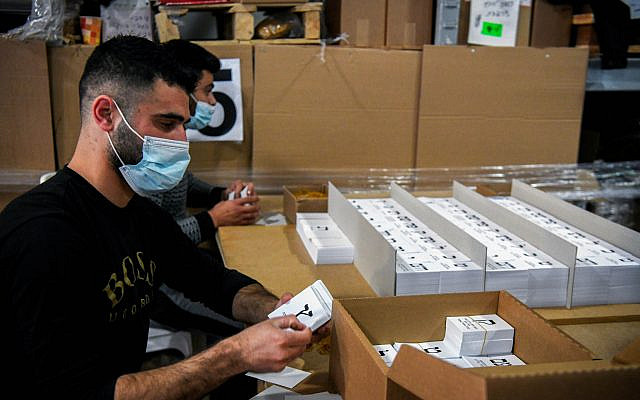 If there is agreement on anything in Israel today, it is that the elections for the 24th Knesset are different than their three predecessors of the past two years. The electoral context is not the same. Neither are the contestants. The content and conduct of the campaign differ. The criteria determining the outcome have shifted. The conclusion, therefore, will involve significant change as well. That is why this unwanted, mostly vapid, uninspiring, non-substantive, emotional yet calculated, and extremely personal campaign is so monumentally important. Whatever happens in its aftermath, Israel will not be the same.

What is at issue is not, as most would have it, merely a question of “Bibi or not-Bibi.” Behind these slogans is something much, much deeper. Attempts to pit the long-serving prime minister, Benjamin Netanyahu, against Yair Lapid, his dominant rival from the center-left, have mostly failed. So have efforts to frame the contest as one between continuity and uncertainty, as if longevity in office is the mark of stability in working democracies (it is not). Ideological disparities still exist, but have been subsumed beneath other concerns.

The outcome of these elections will determine — this time more than ever before — what kind of Israel will exist in the years ahead. Will it be an Israel that takes a final, conscious, step from democratic backsliding into full autocracy? Or will it be an Israel that takes the first strides on the long, uphill path to democratic revival in all its diversity? The choices are as stark as the consequences.

These elections are being held in a unique context. Israelis are emerging from a horrendous year of the coronavirus and pandemic-related upheavals. The success of the vaccinations and the rediscovery of the small joys of mobility and human interaction have contributed in some quarters to collective amnesia, in others to complete numbness, and in still others to multiple variants of post-trauma. Citizens’ trust in government has been shaken. In certain cases, it has been completely shattered. Confidence in decisionmakers — not to speak of politicians — is at a low ebb. And it is not always easy to distinguish between fake news and verifiable facts. As the exigencies of daily life continue to dominate, many are rethinking their priorities and reassessing the identity of their genuine representatives. Fluidity prevails.

The map of the contestants has therefore changed considerably. During the first three rounds of this prolonged election cycle, it was possible to position the vying parties along a rough left-right continuum. No side could muster, partly because of its own self-imposed bans, a clear 61-mandate, majority.

Today, this traditional divide has been occluded by other considerations. The old right has splintered, with Gideon Sa’ar’s New Hope and Naftali Bennett’s Yamina challenging Netanyahu’s hegemony over the right. The far-right, represented by Smotrich’s Religious Zionism and fortified by the militant-nationalist Otzma Yehudit (Jewish Power), has been studiously cultivated by Netanyahu himself. The virtual disintegration of the Blue and White aggregation and the deep sense of betrayal generated by Benny Gantz’s and Labor’s decision to enter a Netanyahu-led national emergency government has fragmented the center-left. Alongside a fortified Yesh Atid and a revitalized Labor party headed by Merav Michaeli, Meretz has opted to go it alone. The Joint Arab List has, once again, divided, with Mansour Abbas’s United Arab List (Ra’am) breaking away with a noticeably conservative agenda. The Arab community is being courted by almost all — granting it a legitimacy that it lacked in the past.

What have simplistically been dubbed as “the pro-Bibi vs. anti-Bibi constellations” thus hide more than they reveal. To be sure, ongoing divisions between annexationists and opponents of occupation still play a role, as do personalities — and the emotions they evoke. But behind these convenient tags lies a gaping chasm regarding the nature of government, its scope, its guiding principles and the manner of its operations. The parties rallying around Netanyahu offer a monolithic, centralized, ethnocentric, and exclusionary alternative. Those challenging his rule, of whatever ideological persuasion, do so in the name of diversity. They share an aversion to the unsupervised over-concentration of power, with some stressing the importance of official integrity, transparency, accountability, and checks and balances in the affairs of state, while others on the more liberal end also highlight equality, equity, mutual tolerance, respect for the other, and civic inclusion. Together, they acknowledge the centrality of compromise to the smooth functioning of democratic regimes.

The content and conduct of the campaign reflect this realignment. Only recently have the contenders thrust aside their preference for downplaying the contest — mostly in response to the noticeable election fatigue exhibited by large segments of the population — in favor of more active attempts at voter persuasion. Ideological debates, together with their security and foreign corollaries, have been shunted to the sidelines as domestic matters have taken over center stage. These have focused primarily on how to deal with the lasting effects of the coronavirus (especially in the interconnected spheres of the economy, social welfare and education), alongside such issues as rising violence, gender relations, and the status of minorities — from ultra-Orthodox and Palestinian-Arab citizens to the LGBTQ community.

Inevitably, the debate has therefore shifted to matters of competence, to who can best provide the answers to pressing questions. In actual terms, the last phase of the campaign has centered on the composition of the future coalition. Netanyahu’s appeal revolves around what he has come to term a “full, full right” coalition, which includes the Likud, Shas, United Torah Judaism, and the far-right Religious Zionists. This construct is avowedly homogeneous in composition, expansionist in scope, questionably democratic in orientation, and — protestations aside — imbued with racist overtones. His opponents on the right and left — ranging from New Hope, Yamina, and Blue and White, to Yesh Atid, Labor, Meretz, and the Joint List — insist on pluralism and are willing to embrace differences to rehabilitate a semblance of democratic life in the country. They have repeatedly stated that they are prepared to downplay their egos as well as their substantive priorities to give meaning to the country’s parliamentary democracy. These are the blunt — highly emotional and simultaneously unquestionably rational — alternatives facing voters on the eve of these elections.

The result of this tug-of-war, in the last days devolving into desperate ploys to siphon votes from like-minded rivals, depends on four seemingly technical, criteria. The first is voter turnout. In most countries that have held elections during the coronavirus pandemic, participation rates have declined by somewhere between 8-15 percent. Predictions for Israel are similar, partly because of voter indifference, partly because of real despair, and partly because of a reduced belief in the capacity to make any difference. The various Get Out the Vote campaigns conducted across the political spectrum might change this forecast.

The second imponderable is voter indecisiveness. Last week, fully one in every 10 of those who said they would definitely vote had yet to settle on their party preference (this amounts to 12 seats in the Knesset — a real gamechanger). The number of these so-called “fragile” voters continues to drop, but even within each constellation, many will not make up their minds until they actually cast their ballot. This makes the predictions of the outcome that much more precarious.

Both turnout and preference determine, third, the number of actual votes needed to pass the 3.25% threshold. The last pre-election polls show four parties — the Religious Zionists, Ra’am, Meretz, and Blue and White — hovering just above this critical line. Theoretically, a lower voter turnout works in their favor, a higher one puts up a greater challenge. Would that it would be so simple: the real contest on election day will be between those parties that succeed in bringing their voters to the polls and those who have left too many of their followers at home. That is also why, until the very last moment, every conceivable effort — from last-ditch appeals to manipulations and outright lies — will be made to convince citizens that the other side is incapable or unworthy of forming the next government.

Fourth — and all too often forgotten — the final results still rely on the distribution of surplus votes (only among parties that pass the minimal threshold). Pre-ballot agreements, especially given the advantage accorded by law to the larger parties, can tip the balance in what is emerging as an exceedingly close race.

The consequences of the elections are thus truly up in the air. In the immediate future, the outcome may lead either to the institutionalization of Netanyahu and his particular form of authoritarianism, to the installation of an ideologically diverse but democratically-driven alternative, to a period of hardball horse-trading in search of defectors, or to another deadlock and a fifth round of elections. None of these options is particularly enticing, but only one holds the promise of safeguarding citizen choices over time, thereby reinstating the possibility of the resurrection — perhaps even the ultimate resolution — of fundamental debates over the nature and direction of Israel in the future.

Faced with the choice between uncontrollable implosion and opening the door for democratic rehabilitation in the long-run, I emphatically opt for the latter. And you? The impending change in Israel is literally in your hands.