Only holders of a VALID Green Pass admitted beyond this point!

If you would have the waitress thank you, and the chef not curse you, do(n’t) do as I do(n’t). Do not: turn the public restaurant into a private catering event by submitting a valetudinarian’s list of alterations and modifications; request that fish, foul, or mammal be cooked beyond what is right and proper for the particular flesh and cut of the creature; make meat dishes into vegetarian ones (the reverse of this, however, is permissible), vegetarian ones into vegan ones, carbohydrate-based ones into gluten-free ones, dairy ones lactose-free ones, or otherwise become a backseat sous-chef to the driver in the kitchen. Do not present the chef with a doctor’s prescription for various exotic allergies and unusual sensitivities, or essentially turn him into a personal nutritionist by advancing a multiplicity of stipulations based on your particular blood type/body type/insulin level/geographical pedigree/ astrological sign/ political party/ religion. (“No, ma’m, we cannot make the herring less salty…”). I also do not remove the egg’s yellow part from its white (a sunny side without the sunshine, really), do not blanch before blood nor shirk away from raw fish or meat, and on the elusive and controversial ingredient of fat, the higher, fuller, and thicker, the better (and healthier, note well).

Some requests turn out to be simply impossible, as well as ridiculous— ordering coq au vin, say, without chicken or wine–incidentally showing the customer to be impossible as well (and certainly not “always right”). Other demands are flat scandalous, like a daiquiri removed of rum. (In the world of spirits, sacrilegious.) Just as well order a martini shorn of gin, and be served a frosted glass.

I do find that I make one personal appeal, and will make it here. What I find, times too often with orders too many, is a cringing degree of sweetness pervading otherwise decent cocktails and deserts (not that I see a difference between the two). This is the pâtissier’s fault for indulging the collective fat child that is the general public, another perfect case of customer-being-wrongness, and it is the public’s fault, too, for a brutish lack of palatal subtly. (The modern mouth doesn’t have a sweet tooth—it has a full set of them.)

From sweet to spicy. The dull and delicate have made chefs cautious of serving spicy food and too wary of it being sent back to serve it as it ought to be served, as spicy as it comes in its country of origin, and I find I must insist that is does. (My boots are made for woking.) Intrigued, Jack was delighted to indulge my folly.

Jack—else Jacko or Jackie—I should add, is a mid-aged Thai woman, and the plucky and snappy proprietress of a small hole-in-the-shuk-wall called Eisan. (She appears unkeen on revealing her real name, and only briefly did I fancy coaxing it from her with charm and suasion, before realizing that there is something so much more appealing and, in its way, authentic, left this way. As to the moniker, it would not surprise to hear its adoption to be the result of Israeli misinterpretation or mishearing or mispronunciation—or rather, a sluggish refusal to interpret, hear, or pronounce what is too perplexing and foreign.)

Like the contents of the able wok she wields, those of Jackie’s simmering character can sting if approached injudiciously. A misleadingly thin-boned woman, skin light and sinewy, with the straight and lush and deep black hair so rife among the women of Southeast Asia. A single front tooth juts out, overhanging beak-like her lip, the better with which to verbally chew you, my dearie. Her cackle—a jolting, sharp-pitched staccato—can easily be taken, if heard from an adjacent part of the room, or if otherwise received unattached to the smiling furnace from which it bellows forth, for a distress call, or a human car alarm, rather than that mirthful concatenation of hiccups we recognize as benign laughter. Her dusky eye, when it is your turn to speak, affixes you suspiciously, mockingly, and—she is of a sardonic humour—the sentences which her tongue belts out, however mundane their purport, be it the simplest salutation or valediction, seem never unseasoned of some subtle sarcasm, if not outright Thailandish outlandish reply. All this, be assured, is not in the least repellent, though it can be disarming to unfamiliars, and ‘Jackie’ is an honorific people use more with a boon of affection than as a verboten epithet of dread. Not fear but endearment is struck in those locals who mention and hear the name.

Thailand has been of late years the preferred destination for a post-army sojourn, an attractively far and far out place in which, following three years of conscription, to be far gone. This accounts in part for the prevalence in Tel Aviv of restaurants said to serve the fare of that country. On the elusive question of authenticity, others than myself can say with more credibility (I once spent a night in Bangkok, and spent it pairing rich Trappist ale with thick, twice-fried fries at the Belgian rooftop restaurant of my hotel). However pure the source, Authenticity, once packaged and shipped abroad, doesn’t often travel well, or soon spoils easily. (Yeah, this holds even if there are real-live Asians, epicanthic fold, diphthongs and all, working the wok.)

Chinese restaurants secretly, (as everyone knows), have their ‘black menu’, and those wishing to de-Americanize their Chinese cuisine ask for it with a knowing winkiness. Well, here is a red menu for the initiated, and it is ow-thentically unsympathetic to your palatal sensitivities, you effete Western farang.

It had taken three occasions, followed by three (what I imagine were) tests or trials, for me to dissuade Jack of her American preconceptions and persuade her to work the wok for me in the way she would for a cousin of her home village. On the first, I had to give her a scolding of my own, for not receiving one culinarily in turn. On the last, I was given the distinct feeling of having graduated something when she looked significantly at me and said: “From now on, I make you right.” Well, that’s all I wanted all along.

I will no longer think of tofu eaters as being as soft and yielding and milky as the preferred curd of traditional Asia and trendy America.

I cannot tell you here what it is exactly I ate, for it was off-menu. I might describe it as curried Novocaine. It is said you can develop a tolerance to capsicum, similar I imagine to the way the alcohol in liquor becomes softer on the tongue with committed nightly (or noontime) practice. But if presently I had an interlocutor across from me the table, I could not have sustained—could not, for that matter, have begun—a conversation. The dish was in fact so heliocentric I could hardly think the words in order so I might numbly babble them. Heat-heads understand and will not themselves deny the masochistic element in engaging oneself with —for you must engage, not simply approach—edible fire. (Hot&Spicy in America has surpassed being a mere trend and is a vocation in itself; the “art” of making hot sauce is as respectably “craft” as beer or wine or small batch liquour, or any of the fantastic things people make in their attic or garage or basement.) Eating food as spicy as this is to play the parts both of torturer and tortured, a form of gastronomical self-flagellation. It was a though I were trying to extract a confession from myself. (“Who do you work for!?” “You!”) Cardio has never been so passive, and sweat and other effluvia liberally flowed. 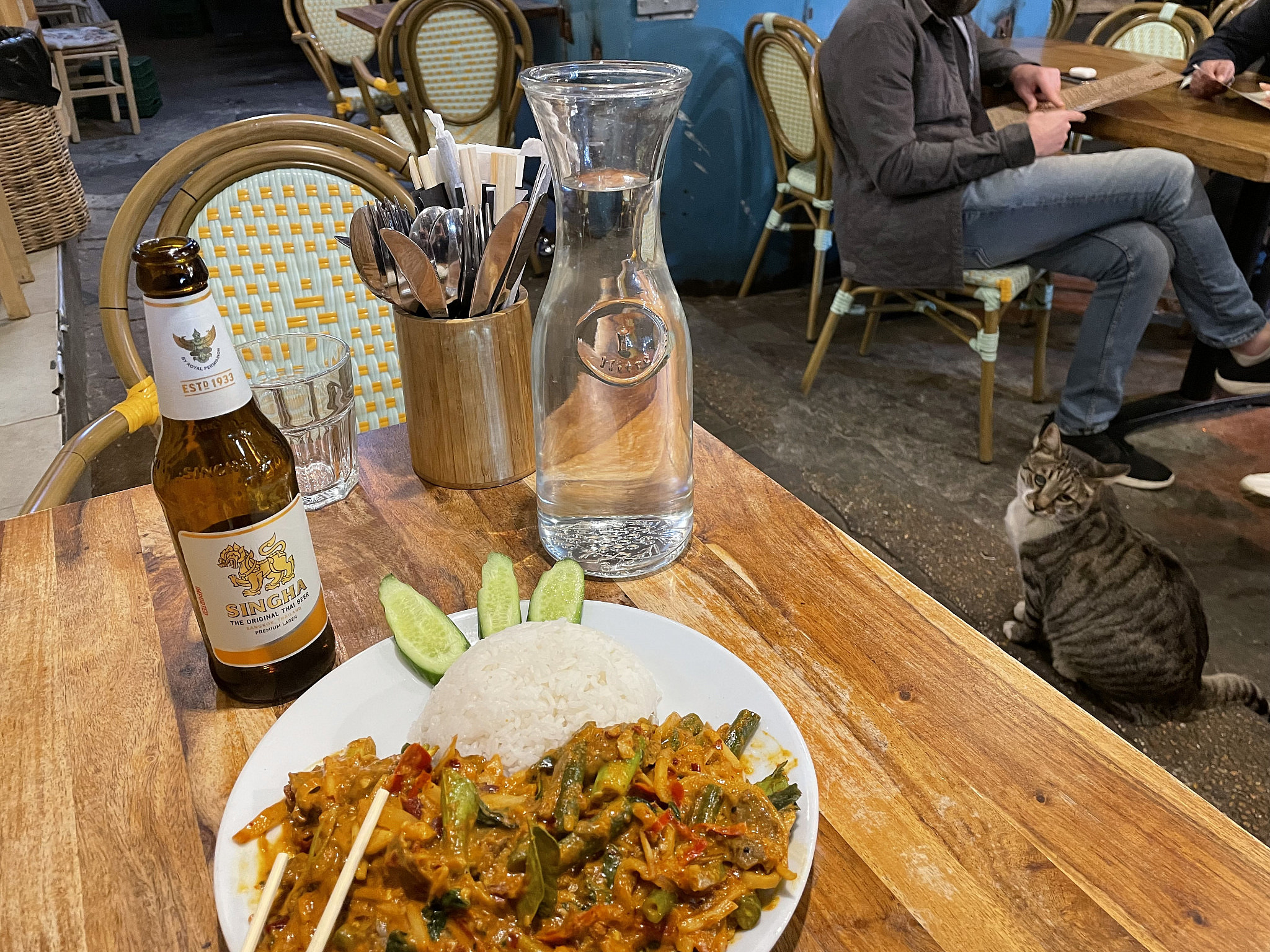 That fat cat certainly didn’t get that way munching off this ferocious grub.

You may wonder why anyone would immolate their palate in this way. Vanity is certainly one answer. Alongside the pepper sauce and chilis, my self-respect was also, as it were, on the table. I was never one to deny, no less give up on, a challenge, admittedly often as they are self-imposed. There is besides much science which might explain the ‘high’ induced by eating spicy foods–the bliss of blitz, if you will–a feeling when mapped found similar in chemical composition to that of love.

In any case I was intent on showing this skeptical little Thai woman that my coconuts were just as large and as firm as any jungle-bred native. She might put forward a severe indifference, but I felt that from the kitchen in my direction came curious glances, waiting for me to resign ignominiously, to, in a pugilistic platitude, ‘throw in the towel’—or the many many little delicate rectangular table-napkins (why can’t they make them larger? fitted more in the direction of a human mouth as opposed to a chinchilla’s?) that had amassed before me like an ornate paper shrine. Perhaps there were even a part of her which reluctantly wished for my triumph. The Thai have a disparaging name for foreigners, ‘white buffalo’, and I would not be found having roamed beyond my borders into the wrong grazing field.

So? She didn’t quite utter her skepticism as much as suggest it using the lines of her face.

“Good,” I said, without just saying so.

“I can make for you more spicy.”

“I make you special coconut dish next time. Careful.”

“I eat more spicy than you think. Believe.”

“I believe.” I had self-anesthetized the nerves during my meal enough to have surgery done painlessly.

“Don’t you believe nobody nothing till you see for yourself.”

We went on in this manner for a time, comparing lemongrass sticks. Jackie used to answer me monosyllabically: “Hi” used to garner a “yea”; “How are you” would elicit an “mm”. My progress from this to polysyllables, sensical clauses, proper sentences and, now, veritable conversational exchanges, is surely some sign of progress.

The authentic question remains just that. It may not be the best from not here “out there”. (If you want good, as in fine, Thai food, you will go to Kab Kem which, besides being great, is great fun said repeatedly.)

But I left (with what sensations were left to me) feeling pleased enough—with the place, with Jack, with myself. This American had at least found a place that met the standards of ‘heat’ to which he was wonted—in a Thai shanty on a byroad in an Israeli bazaar.