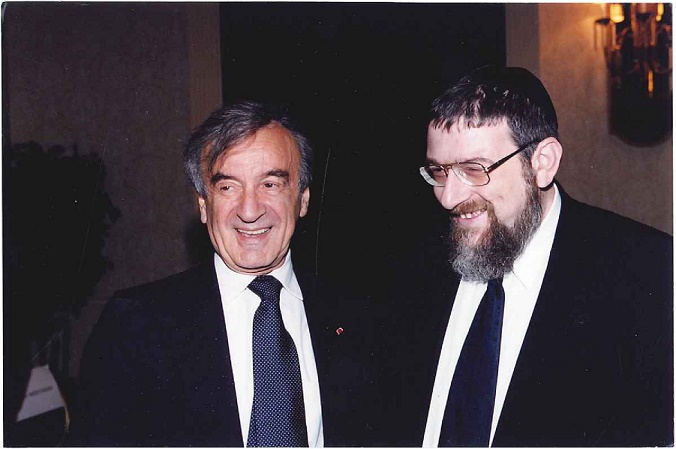 I had the honor of being Elie Wiesel’s friend for over 33 years. For a time I was the International Director of his Foundation for Humanity and accompanied him on his visits with world leaders, politicians, fighters for freedom and human rights, in the classroom with students and in meetings and lectures with the masses. I always asked myself what makes him, in his quiet manner, so successful in breaking down the walls of indifference and forgetfulness that we are so comfortable building around ourselves? How did he, for so many years, know how to speak, act and protest against the injustices of our world that continue to plague us — racism, apartheid, genocide, closing the door to refugees and hatred of the “other”?

I think that every person who met Elie felt that standing before him or her was a man risen from the dead, whose past was imprinted on his melancholic face, in his frail body and in his fiery eyes. At the end of his book, “Night”, Elie described what he saw the first time he looked at himself in a mirror after the Shoah: “From the depths of the mirror, a corpse gazed back at me. The look in his eyes, as they stared into mine, has never left me”. He knew that he must remember in order to bear witness, and slowly, he also found the way to do so. The sense of gravity, responsibility, fear and incredulity is present in every word Elie wrote about the Shoah. He once said that to write his memoirs of Auschwitz and Buchenwald was like writing the epitaph on a virtual gravestone for the dead who were never buried.

The Nobel Peace Prize he received was one of the most popular of the Nobel Prizes ever awarded. Thousands upon thousands of people marched through the streets of Oslo in order to honor his testimony and his message to all humanity. But despair cannot be the answer and from the piles of the ashes of the dead too, there is a spark of hope upon which can be built human dignity, peace and the future.

Yesterday, Elie Wiesel’s voice became silent. But in the memorial candle a spark of hope will shine.