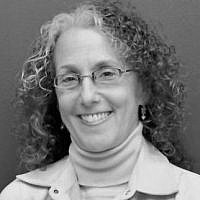 The Blogs
Elyse Goldstein
Apply for a Blog
Advertisement
Please note that the posts on The Blogs are contributed by third parties. The opinions, facts and any media content in them are presented solely by the authors, and neither The Times of Israel nor its partners assume any responsibility for them. Please contact us in case of abuse. In case of abuse,
Report this post.

A colleague of mine who blogs frequently once wrote this advice: “Never, ever, ever read the comments. They are ugly, hateful, and often personal attacks. Publish your blog and move on.” This is extraordinary difficult for the teacher in me. I used to love the give-and-take of the classroom, the back-and-forth dialogue that leads to deeper understanding and closer relationships. The moments of clarity which come from having your own deep-seated opinions challenged. The new way of looking at something. The chidush. The shakla v’taryah. The “oh, I never thought of it that way!” moment. I cherish the chevruta experience of sitting with someone who may totally disagree with my reading of a text, or whose life experience colours their way of seeing a commentary very differently than I do, and struggling to hear why they see it the unique way that they do.

Our great teachers Hillel and Shammai practiced this kind of dialogue a long time ago. In Eruvin 13b we read: “Rabbi Abba said in the name of Shmuel: For three years, Beit Shammai and Beit Hillel argued. One side said that the  halachah is like us, and the other said that the halachah is like us. A Bat Kol [a Heavenly voice] called out: Elu v’elu divrei Elohim chaim — These and these (i.e. both of these) are the words of the Living G-d, but the halacha is that of Hillel. A question was raised: Since the heavenly voice declared: ‘Both these and those are the words of the Living G-d’ why was the halacha established to follow the opinion of Hillel? It is because the students of Hillel were kind and gracious. They taught their own ideas as well as the ideas from the students of Shammai. Not only for this reason, but they went so far as to teach Shammai’s opinions first.”

Yes, I know very well that Hillel and Shammai were arguing about seemingly minor things like which way to light the Chanukiah, and not about whether to light it at all. I know at the end of the day they were both what would be deemed “halachically observant Jews.” And I know that the claim of “competing truths” does not ring true to many halachic Jews who hold that there is only one way, and it must be the traditional, halachic way. If you drive on Shabbat, you cannot possibly care about Shabbat. If you eat out in non-kosher restaurants, you cannot possible know anything about kashrut. If you don’t fast on Tisha B’av, you also cannot possibly fast on Yom Kippur either. Take out one brick and the whole house falls. For such Jews, the suggestion that the house still stands strong, and actually is rebuilt with other equally strong bricks (egalitarianism, feminism, liberal Judaism) is anathema to black-and-white assumptions which dare not be challenged.

In the past few years, this kind of respectful listening and dialogue has become more and more rare in the Jewish world. Whether discussing Black Lives Matter, Israel, Women of the Wall, LGBTQ Jews, or any other number of “hot” topics, many Jews feel silenced, bullied, invisible, personally attacked, and fiercely critiqued in the Jewish press.

In her book Being Wrong (Harper Collins, 2010), author Kathlyn Schultz reminds us that when we are faced with recalibrating our own set worldview because someone’s opinion challenges our certainty that we are right, we run to three easy explanations: 1) they must be stupid; 2) they must be wrong; and 3) they must be evil. Those who write essays and articles critical of halacha, or questioning blind loyalty to every Israeli policy or leader, or supportive of liberal causes, are regularly called all three. I have experienced that kind of horrible name-calling right here on blogs I have written for TOI, as have some of my colleagues. The most vicious attacks are mostly from Orthodox Jews, mostly from men, and mostly from those who otherwise preach “love of klal Yisrael”. This has been corroborated by my female Reform colleagues who have had the same kind of attacks piled on them. Hollywood stars regularly have to block their feeds. Do Jewish bloggers?

Yes I understand the profound belief that it is wrong to remain silent in the face of great assimilation, or halachic deviation, or the “one who leads others astray,” plus the commandment in Leviticus to surely rebuke your neighbour; yet I also cling to to the hope we can be steadfast to the admonitions against lashon hara (slander), sinat chinam (gratuitous hatred one Jew toward another), and motzi shem ra (injuring the reputation of another Jew.)

The comments section on many blogs are toxic landfills, replete with frustrated preachers and online bullies who cannot be bothered with the spell-check on their computers. (“Ideot!” “Terrable artical”.) No longer anonymous, trollers find bloggers personal Facebook pages and Twitter accounts and post their attacks there, knowing that we won’t scroll down our own articles to see them question our sanity, our ethics, and even our children.

So go ahead, trollers. Write away on the comments section below, things like “she deserves it!”  and “my hate of her is justified.” Call me names—my mother of blessed memory taught me the same thing I bet your mother taught you, that respectful response when we came home bullied or sad about nasty teasing thrown at us— that sticks and stones will break bones but words will not harm. I’m grateful my kind mother didn’t live to see her words contradicted by the vitriol we allow on social media sites, vitriol which makes it possible for people to counsel everything from excommunication to physical violence against those they do not know but whose opinions challenge their very certain worldviews. Tell everyone how right you are, how right you were, and how right you will always be. But remember:  “Who is wise? The one who learns from every one.” (Pirke Avot) And I’ll remember my mother’s other sage advice: the one who throws mud at someone first gets dirty themselves. Rambam, in Hilchot De’ot 7:3 quotes the sages: “As the Sages said, “Lashon hara kills three people: the one who says it, the one who hears it, and the one about whom it is said.” No one goes unscathed in the way we talk to each other—the one who calls out “moron!” and the one who is called “moron!”— equally. Each time that happens, I imagine Hillel and Shammai weeping for how low we have sunk in our inability to embrace the elu v’elu ideal.

The optimist in me still wants to believe that from the example of Hillel and Shammai we can relearn the art of Jewish dialogue, even with those whose way of being Jewish challenges us to our very core.

About the Author
Rabbi Elyse Goldstein is the spiritual leader of The City Shul in Toronto, a leading educational innovator, prolific columnist and the author of four books including "New Jewish Feminism: Probing the Past, Forging the Future"
Related Topics
Related Posts
Comments