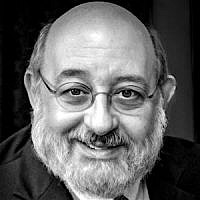 The Blogs
Daniel Allen
Apply for a Blog
Advertisement
Please note that the posts on The Blogs are contributed by third parties. The opinions, facts and any media content in them are presented solely by the authors, and neither The Times of Israel nor its partners assume any responsibility for them. Please contact us in case of abuse. In case of abuse,
Report this post.

We marvel when a famous person rediscovers their Jewish roots. We applaud when we recruit the unaffiliated, when we are successful in gathering more inactive Jews to the ranks of the active. We rejoice when we bring more Jews home to Israel or home to activism in their community. However, we often fail to admire and honor those who are the core of the community, those who quietly and consistently participate, contribute,  and protect the Jewish people paving the way for the next strong generation
Mila, born this week, is 25the great grandchild of Harry and Anna Allen, the third born this year since my dad’s death. Fourteen of these children live in America and eleven in Israel. During WWII a boy from Denver named Harry Allen and a girl from Omaha named Anna Arbitman met for a blind date thanks to the JCC in Omaha’s scheme to offer young Jewish servicemen an early form of Jdate. Their first date was a long conversation on the nuances of Zionist ideology and an abiding knowledge that one day they would each live in the new Jewish State.

They were married for 69 and a half years living the last 28 in Jerusalem. What is both remarkable and unremarkable about this couple, like so many other thousands of core Jewish couples, is that they grew a Jewish family which is involved in diverse ways in the life of the Jewish people. Each of their four children has children in Israel and America. There are 12 grandchildren with all 9 of those in America having spent a gap year in Israel.
The breadth of this family spans places as disparate as a secular kibbutz to the charedi enclave in Monsey. There are four rabbis with smicha from HUC, JTS, Ziegler, and Ner Yisroel spanning two generations leading congregations, a national organization and doing hospice work. The family members are leaders in Jewish ethics, a strong sense of tzedakah, support of Jewish early childhood education and camping, working to allow for the dignity of Jews in the former Soviet Union, participation in the highest levels of both building and defending Israel and a great love of Torah although from very different and differing perspectives.
Harry and Anna lived in five communities raising us. In each one they were active members of a synagogue and participated in Jewish organizational life. But what they did most of all was to instill in us a sense of pride in being a Jew. It did not matter what type of Jew you were, where you went to shul or if you went to shul, but you were one of ours. As Harry would say you do not have to like all the Jews ( or agree with them) but you have to love them.
When I think about the 52 current descendants and members of the family of Harry and Anna I worry that the Jewish people’s political and religious tensions could get in the way of this strong family indeed of all Jewish families. I worry that there are more interior threats to our people and to Israel than exterior ones. I worry that too often we think Jewish electoral power is more important than spiritual and communal strength. I worry that zealotry, intransigence and a sense of unrepentant false messianic truth in all forms is seeping into the very soul of our people from a variety of angles none of which will bring us good outcomes.

On Friday nights for a period of time when we were kids dad would teach us from the Ethics of the Fathers. The one which I always remember was from Ben Zoma, Chapter Three: Who is wise, one who learns from every person, who is brave, one who subdues his own negative intentions, who is honored, one who gives honor to another, who is rich, one who appreciates what he has in this world.
We need to recognize that it is the core of activist Jews, reflecting our diversity, carrying on the multiple traditions of our people that will keep us strong. It is the core activist that are the remarkable strength of our people even as we strive to open as many doors as possible to the less active to join us. In these challenging times we do need Ben Zoma’s words. We need to bolster our core. During Elul, as we are asked to contemplate our interior Jewish personal and communal life, we also desperately need the wisdom of my dad: you don’t have to like all the Jews but you must love them