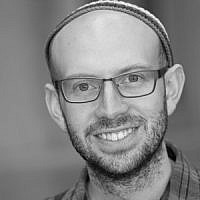 The Blogs
Jonah Rank
Apply for a Blog
Advertisement
Please note that the posts on The Blogs are contributed by third parties. The opinions, facts and any media content in them are presented solely by the authors, and neither The Times of Israel nor its partners assume any responsibility for them. Please contact us in case of abuse. In case of abuse,
Report this post.

The terror of the hostage standoff that took place at Beth Israel in Colleyville last weekend reminds us that antisemitism is alive and well in the United States. It is nothing short of a miracle that Beth Israel’s rabbi and congregants all emerged physically unharmed on Saturday, and we all owe a deep debt of gratitude to the law enforcement and negotiators and to Rabbi Charlie Cytron-Walker’s leadership during those 11 harrowing hours. Rabbi Cytron-Walker has credited his being alive today to training he and members of his community received through the Colleyville Police Department, the F.B.I., ADL, and Secure Community Network. American Jews are lucky to live in a country where federal and municipal services can train faith communities to prepare for attacks, but I still believe that there is a lot more the United States can do to fight back against antisemitism.

In the summer of 2021, President Joseph R. Biden Jr. nominated for the position of Special Envoy on Combating and Monitoring Antisemitism Dr. Deborah Lipstadt. Lipstadt is an award-winning scholar of antisemitism and Holocaut studies, a former appointee of the Clinton administration, and the winner of the libel case that David Irving issued against after when her book Denying the Holocaust called out Irving for his acts of denying of the Holocaust. Though Lipstadt was nominated back in July, the Special Envoy office for taking on antisemitism has remained unfilled since the end of Elan Carr’s two years in this role during the Trump administration.

Lipstadt lacks nothing in credentials for this position. The sole reason that Lipstadt’s nomination has not been heard or confirmed by the US Senate is simple: Lipstadt is one of more than 180 nominees whose political careers hang in the balance of a nearly evenly split Senate that has neglected to reform the filibuster. In other words, approving any Biden appointee requires not just 51 votes, a simple majority, of the 100-member Senate (plus Vice President Harris’ deciding vote in a 50-50 split); rather, at least 60 voices of consent are required to move along any conversation productively. In the deeply partisan atmosphere of modern American politics, few debates can proceed meaningfully when the Senate Democratic Conference of 50 members gathers with the Senate’s 50 Republicans. In what amounts to a political stalemate, whether or not Lipstadt will ever serve as a Special Envoy stands in limbo.

Those who question the urgency of Lipstadt’s appointment might ask what a Special Envoy can do anyway. The Special Envoy represents the Executive Branch and is able to tackle any variety of complex and intersecting issues that may be more than one would expect other members of the Executive Branch (such as the President) to handle on their own. Todd D. Stern, the Special Envoy for Climate Change served as the USA’s chief negotiator for the Paris Climate Agreement in 2015. Three years later, Special Envoy for Hostage Affairs Robert C. O’Brien helped release American citizen Danny Burch from captivity in Yemen. Back in 2006, the Special Envoy for Darfur, Andrew Natsios, coordinated the North/South Comprehensive Peace Agreement. Brett McGurk, as Special Presidential Envoy for the Global Coalition to Counter the Islamic State of Iraq and the Levant, helped instill a sense of competency and western allyship in the government Iraq formed in in 2018, and McGurk’s predecessor, John R. Allen, was responsible for growing the Global Coalition from 9 members to 65 cooperating nations in the course of 15 months.

A Special Envoy, in short, can do a lot for not only the United States but for the world. Recognizing rising antisemitism in recent years–not only attacks in synagogues but Zoombombed prayer services, antisemitic graffitti, anti-Jewish conspiracy theories old and new, arson attempts, and murders–American Jews could only benefit from enlisting a Special Envoy with a portfolio of quashing antisemitism. To get there now though, we need a Senate that will reform or end the filibuster.

Antisemitism should not be partisan, but the current Senate has committed to unnecessarily associating any number of discussions with a single party. At this point, Republican opposition has indefinitely delayed the nominations of dozens of Biden’s nominees. Though Democrats technically hold a majority in the Senate, this majority is rendered mostly useless when at least one Democratic Senator remains committed to the filibuster (which itself only requires 51 votes to overturn). With Senators Kyrsten Sinema and Joseph Manchin III publicly doubling down on their refusals to overturn the filibuster, the American Jewish community loses out on appointing a Special Envoy to come to bat against antisemitism.

For American Jewish institutions who legally can–and for all Jewish American citizens who are concerned about rising antisemitism–now is the time for American Jews to lobby their Senators to demand the end of the filibuster because we need new toolsets to stop antisemitism. Could we get a Special Envoy who partners with foreign diplomats on how to combat antisemitism in their own nations? Can a Special Envoy institute national programming that educates more Americans on how to detect antisemitic conspiracy theories? Would a Special Envoy advocate for increased funding for an increase in trained security to guard Jewish institutions in the weeks following major antisemitic actions? Is it possible that a Special Envoy could partner with other governmental bodies to protect more Americans from gun violence?

As the need for greater leadership in responding to antisemitism grows, the Republican Jewish Coalition can unite with the Jewish Democratic Council of America, AIPAC can agree with J Street, and all American Jewish groups should feel empowered to call for an end either to today’s partisan extremism or to the filibuster as we know it. Recent studies have pointed to the high frequency at which the filibuster has been invoked specifically when race or civil rights have been the subject or the subtext of a debate, and the Jewish community should not stand behind a procedural tool that is used to propagate prejudices against Jews or any other group. Jewish voters may be sometimes divided on certain legislative issues, but how can the Jewish community take a pass on appointing someone to treat the epidemic of antisemitism? Now is the time to push past the block and to get antisemitism the Special Envoy it needs.

About the Author
Jonah Rank is a musician, writer and editor. Jonah received a B.A. in Music at Columbia University and a B.A. in Jewish Music at the Jewish Theological Seminary. At the latter, Jonah was ordained as a rabbi and earned a MA in Jewish Thought. Jonah served as the secretary of Mahzor Lev Shalem (Rabbinical Assembly: 2010) and Siddur Lev Shalem (Rabbinical Assembly: 2015) and the Managing Editor of Zeramim: An Online Journal of Applied Jewish Thought from 2016 until 2020. Jonah now works in New Hope, PA as Director of the Shul School at Kehilat HaNahar and is editing or authoring at least three books at this time.
Related Topics
Related Posts
Comments