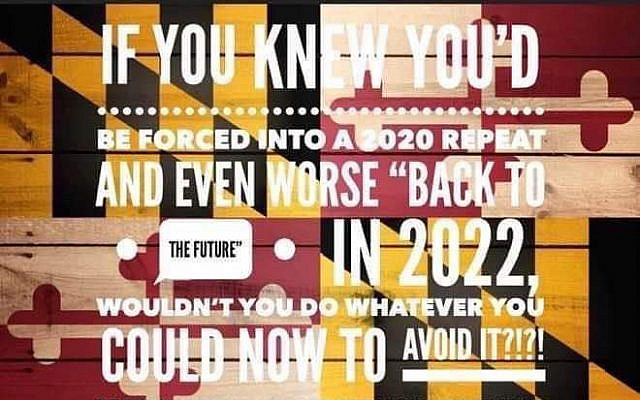 This flyer promoting the candidacy of Maryland State Representative Dan Cox for Governor of Maryland circulated through Jewish professional channels this week. It is unclear who created it, but Rep. Cox has been made aware of it and has not publicly denounced or renounced it.

Has anyone seen the latest flyer promoting Dan Cox’s candidacy for governor of Maryland? Aside from being a mortal offense to graphic designers everywhere, it contains a box on the lower, left-hand corner that reads as follows:

Your loved ones will ask you, “What did you do to avoid totalitarianism?” You will ask yourself, “What more could I have done?”, Reminiscent of Oskar Schindler who wanted to save one more Jewish person from being exterminated.”

Political candidates the world over, hear my cry! It is never appropriate to use Holocaust references to try to win votes.

It is inappropriate to wear yellow stars in protest of vaccine mandates.

It is inappropriate to compare public health officials to vile Nazis like Dr. Josef Mengele who tortured and killed Jews through medical experiments.

It is inappropriate to compare vaccine mandates to Jewish ghettoization and deportation to concentration camps.

Absolutely nothing occurring in the United States today is remotely comparable to the Holocaust. If that thought fleetingly enters the hole in your right ear, please allow it to flow directly back out of the hole in your left ear, as there likely is very little in between to impede it.

When did Holocaust analogies become the language de rigueur in modern-day, American politics?  Republicans and Democrats alike seem to think this is an appropriate form of rhetoric.

From Republicans Marjorie Taylor Greene to Lara Logan to Dan Cox, these types of analogies are deeply offensive to Jews. Do you not understand that you repel Jewish voters with this type of language? Are you so comfortable in appropriating the tremendous loss and suffering of victims of mass genocide that you fail to comprehend how grotesque your words are?

Democrats are no better than Republicans in this regard. How many times did we hear Donald Trump compared to Adolph Hitler over the course of his term in office? Love or hate Trump, comparing anyone to Hitler is beyond the pale. Even President Biden made references to Goebbels during his campaign and “the Big Lie” of the Republican party. Does anyone remember Alexandria Ocasio Cortez and her ilk referring to immigration detentions facilities as “concentration camps” and how popular the phrase “Never Again” became in relation to that crisis?

Stop belittling the Holocaust. Stop using the intentional extermination of millions of people as your go-to analogy to deride your political opponents on a day-to-day basis. Your hyperbolic language devalues every life stolen in a gas chamber and every soul released through the chimney of a crematorium.

It is politicians like Cox, Greene, and AOC who have disaffected people like me and driven us from any political home. If this is how Mr. Cox intends to wage his campaign, he should know that he will lose more voters than he will gain with this type of language. The people who condone it are already on his side, and the people whom it offends will flee to any other option.

More specific to Mr. Cox: If you did not create this flyer and you do not support its message, then denounce it publicly and renounce your attachment to it.  Otherwise, voters have to assume that you stand behind such odious messaging.

If you do stand by it, I can only say this. As you participated in storming the Capitol on January 6, 2021 and facilitated busloads of people to join you, you lost the moral high ground to compare yourself to Oskar Schindler. Methinks you likely lost that high ground years ago, but when you possess as fascist a mark as that on your record and soul, you’ve relinquished the ability to complain about the tyranny of the government, as you do elsewhere on your flyer.

When you call former Vice President Pence a “traitor” as you attempt to storm the Bastille, you demonstrate a distinct lack of comprehension of the meaning of that word and to whom it applies in that scenario.

As you are fond of Holocaust analogies, I’ll explain to you whom you represent in that analogy. You’re a Brown Shirt who wanted to burn the Reichstag to institute your power over the people’s electoral will. Chew on that for a while. Leave us Jews out of your bid for office. We want no part of it.