'Ramadan Nights' in the city of Tayibe. May, 2018. Shared Path’s tourism initiative, a partnership with Sikkuy, has brought thousands of Jewish Israelis over the years to visit Arab communities. (Courtesy of Shared Path/ "Derechim Sholovot")

What’s your approach to making decisions? Are you more apt to say “too many cooks in the kitchen spoil the broth” or “two heads are better than one?” Do you prefer to make a collaborative decision or just decide for yourself?  And does it matter whether it’s a decision about who gets to make pancakes on Saturday morning or how you run an organization?

We all like to fashion ourselves as inclusive in how we make decisions. But, secretly, don’t each of us really think that we know best? And if so, do you have people who call you out on this- maybe your kids, your spouse, your siblings? Consider the last time that you insisted that you alone knew the perfect ratio for chocolate chips in the cookie batter (a purely hypothetical situation of course). You probably weren’t held up to any public scrutiny on this one. If there were any consequences, they likely were not too serious.

But here we have some very brave leaders operating in an arena -advancing shared society for Arab and Jewish citizens of Israel- and this has especially high stakes. These leaders of shared society organizations, purposefully led jointly by two directors, have chosen to go with the philosophy that “two heads are better than one.” And they are out there in public, subject to criticism or cynicism about their joint decisions all the time.

Two directors aren’t atypical in the sense that we see co-led organizations around the world – in cultural institutions, hospitals and universities.  However, in co-led shared society organizations, a particular skillset or individual expertise is of secondary importance.  Of primary significance, by principle and design, is the fact that the organization is led by two full time directors, one Arab and one Jewish, who jointly determine the strategy and direction of the organization. This is a uniquely Israeli version of this management model.

You may be thinking: “That’s crazy,” or “That’s impossible.” Or you may consider it inefficient, convinced it is a waste of resources. Feel free to level any type of criticism. They have already heard it all and more.

Yet somehow, these organizations, like Sikkuy, the Abraham Fund Initiatives, Tsofen, Mahapach-Taghir, and AJEEC- NISPED -each led by co-directors for over 10 years-are continuing to thrive and expand their work. In fact, as we have seen in our research on shared society organizations, they believe their co-leadership model is an important factor in their success.

As this cohort of co-leaders see it, there is really no other way to operate. In their decision making and leadership structure, they are modeling how it is possible to find common ground. They are showing that Arabs and Jews can not only work collaboratively together within an institution, but they can have joint equal responsibility and ownership.  In doing so, they are continually engaging, managing conflict and ultimately staying focused on the goal of creating a more inclusive and equal society.

You might say, “And how exactly can this work in the midst of a national conflict between Jews and Arabs, with all the political incitement, intermittent violence, hate crimes and regional tension?” 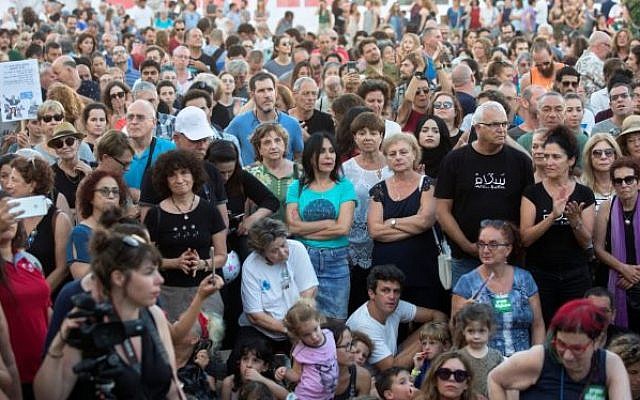 Well, yes. It’s hard and there are many challenges, but progress has been made. Take Sikkuy (“Opportunity” in English), for example, led by Palestinian Arab co-director, Rawnak Natour, and Jewish co-director, Ron Gerlitz. They have spent the past three years leading and expanding Sikkuy in an extremely complicated external environment and often under intense public scrutiny.

Rawnak and Ron, in their quiet and graceful way have proven again and again that a Palestinian woman and a Jewish man can co-lead an organization, taking into account the many interests of diverse Arab and Jewish communities. As they explain it, the goal is to work towards a partnership that is “equal, efficient and kind.” There are inherent tensions in maintaining these three aspects of their partnership, but for them, finding the right balance in every situation is the art of co-leadership. 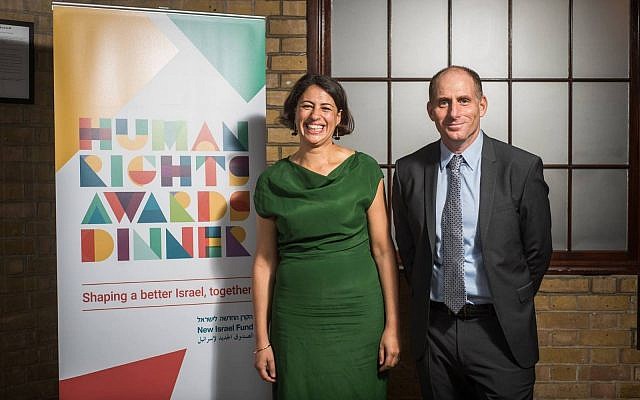 So what are some of Sikkuy’s efforts to advance their goals? There are lots of initiatives and collaborative efforts with other NGOS to increase the number of Arab citizens in the civil service, to expand Arabic signage on public transportation, and to promote the representation of Arab citizens in Israeli media.

Example of Sikkuy ongoing advocacy efforts to ensure public transportation signs in Arabic. Over the past year, the Ministry of Transport is adopting bi-lingual Hebrew and Arabic service on Israel’s state-wide bus service. (Courtesy of Sikkuy)

Partnerships are varied and diverse, including projects to encourage the teaching of Arabic for Jewish Israelis and to further develop Jewish-Arab tourism with tours, for example, in Arab communities  during the Ramadan holiday. Ron and Rawnak have been part of the effort to shift the discourse on these issues in Israel as well as abroad, and have been involved in expanding even further, the growing number of Jewish philanthropic foundations that are prioritizing those efforts, focusing on equality between the Jewish and Arab citizens. 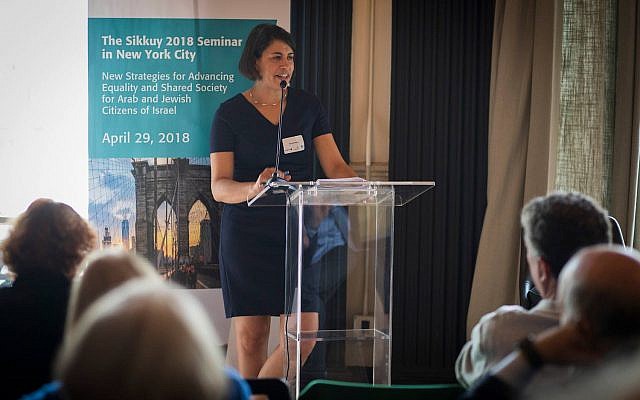 The Sikkuy Seminar in New York City, with Rawnak Natour speaking, was supported by the UJA-Federation of New York, the Social Venture Fund for Jewish-Arab Equality and Shared Society, and other donors. April, 2018. (Credit: Michelle Gevint)

And like so many advocacy organizations, Sikkuy is in a delicate position when it comes to working vis-à-vis the government, while also being a critic. Taking into account the different views and interests of Arab and Jewish communities, Rawnak and Ron, as well as the rest of the staff at Sikkuy who also follow a co-model in decision making, are continually challenged to work towards the principles of a shared society.

For example,  a few years ago, Sikkuy supported Government Decision 922 to equalize government spending in Arab and Jewish communities, even though initially, many were skeptical of the government’s commitment to its implementation.  And while acknowledging the problematic aspects of the plan, Sikkuy is working with government ministries and with Arab mayors and council heads to overcome obstacles. It is primarily doing that by providing planning, legal know-how, and public policy expertise in order to help Arab municipalities develop the capacity and infrastructure to receive funding.

Yes, it may be confusing that the same government that has enacted the controversial nation state law is also investing unprecedented amounts of money to boost economic development within the Arab sector. But no one ever promised that things would be consistent or predictable.  The co-leaders of shared society organizations understand this more than most. Things are constantly in flux. It’s messy, hard and challenging. Ron and Rawnak would be the first to tell you this. But this is the work of building a shared future in a multi-cultural, multi-ethnic society.

As Rawnak announces her departure from Sikkuy to join her family abroad, it is timely to pay tribute to their partnership and the fine art of building co-leadership. With their commitment and by their actions, they have worked to create more opportunities for these types of partnerships that, despite living amidst conflict, can be “equal, efficient and kind.”

The staff of Sikkuy, including co-directors of the various departments, who are modeling the idea that having many “cooks in the kitchen” ultimately builds stronger partnerships. July 2018. (Credit: Adi Segal)
About the Author
Dr. Nancy Strichman teaches graduate courses in evaluation and strategic thinking at the Hebrew University’s Glocal program, a masters degree in International Development. Her research has focused on civil society, specifically on shared society NGOs and gender equality in Israel. She lives in Tivon, Israel with her four children and her very patient husband.
Related Topics
Related Posts
Comments