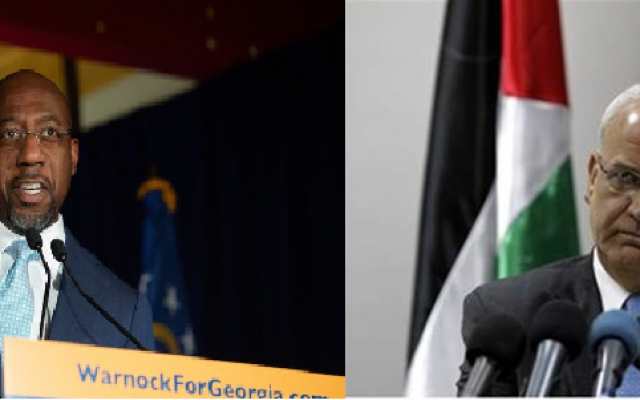 Blatant Israel hatred is often obvious, how then, do so many miss it? Many Israel lovers so desperately want to be admired by all they will overlook obvious signs of Israel hatred just so they don’t have to face the hatred right in front of them. The willful blindness would be excusable if it didn’t come at such a high cost. Lives have been lost at the vain attempt to assuage our desire to be loved – and yet Israel lovers make the same mistake over and over.

This week Palestinian chief negotiator and Secretary General of the Executive Committee of the PLO Saeb Erekat died of COVID in an Israeli hotel in Jerusalem. Erekat was a frequent purveyor of modern-day blood libels against the Jewish state, stating, “The Israeli aggression against the Palestinian people still continues, through summary executions and collective punishments.” Whether it was his Jenin blood libel, his advocacy for a right of return of Palestinian descendants to Israel, his approval and support for “Pay for Slay” his refusal to stop Palestinian terror, or refusal to allow his own people to vote or seek medical care, Erakat was a villain in a diplomat’s costume.

Yet praise for Erekat came from Israelis like former foreign minister Tzipi Livni. who said, “I’m saddened by the death of Saeb Erekat. Saeb dedicated his life to his people. Reaching peace is my destiny, he used to say.” American diplomats Martin Indyk, Daniel Kurtzer, Aaron Miller and Dennis Ross even wrote a gushing obituary for Erakat. For years Livni, these diplomats and so many others sat across from Erekat and listened to his words of peace and failed to notice that Erekat sought an end to the Israeli-Palestinian conflict not through peace, but through the delegitimization and weakening of Israel as a Jewish state. His words were slanderous and hate-filled.

It is this same willful blindness that has so many Israel lovers refusing to see the two-faced lies of Georgia Democratic Senate candidate Reverend Raphael Warnock. In an upcoming op-ed Warnock wrote that he “wholeheartedly and unabashedly echoes Dr. King’s declaration that ‘Israel’s right to exist as a state in security is incontestable.’” He ends his op-ed writing that he can be counted on to stand with Israel in the U.S. Senate. Yet, his past sermons don’t support his op-ed. In a recently revealed sermon Warnock used libelous claims that Israel shoots Palestinian like “birds of prey,” compares violent Palestinian riots to the peaceful African-American civil rights protests and claims that Palestinians are “struggling for water and for their lives.” All lies.

Many in the Pro-Israel community refuse to recognize Warnock for who he really is – an Israel hater in the image of Representatives Omar, Tlaib, McCollum and Hank Johnson. Each of these Congresspeople met with their local Jewish leaders and expressed their support for Israel’s right to exist and defend herself. Yet they also spread slander about Israel and rarely if ever call out Palestinians for their terrorism or refusal to negotiate with Israel. They blame Israeli building and not Palestinian intransigence as the impediment to peace. Just as many claimed that Omar and Tlaib just needed to listen and they’d come around, they say the same of Warnock today.

Minnesota Jews said they’d talked to Omar and she wouldn’t be bad for Israel, Labor Jews in England vouched for Jeremy Corbyn, and now many Georgia Jews are vouching for Warnock. Candidates who hate Israel always cozy up to local Jews and tell them what they want to hear – it’s how they get elected. These local Jews don’t want to believe these people hate us because doing so would admit that they can be fooled and we have an optimistic belief that we can educate anyone out of their hatred of Israel.

Many defend Warnock by saying criticism of Israel is acceptable. While criticism of Israel is acceptable, it’s only legitimate as long as it isn’t libelous or based on a double standard. The same voices that say Israel has a right to defend herself are the first to criticize Israel when it practices standard battlefield policies. They hold Israel to an impossible standard on the battlefield and rush to demonize Israel when it can’t meet the impossible standards. They are also the first to spread lies about Israel in the fashion of Warnock’s lie that Palestinians are struggling for their lives and Israeli soldiers shoot Palestinians like “birds of prey.” Warnock’s criticism of Israel is way past acceptable and he’s never retracted his lies.

Erekat and Warnock are two peas of the same pod. They talk as though they support Israel’s right to exist and defend herself as long as they don’t actually take steps to defend herself. They dress as diplomats and statesmen, but their words betray their true feelings – hate directed at Israel. Erekat was never a friend of Israel and Warnock has shown he will never be a friend to Israel.

The Pro-Israel community must finally learn its lesson. The people that hate Israel aren’t going to wear Nazi uniforms or broadcast their hatred in easily detectable soundbites. The new haters don’t wear a gun into the UN, they put on the sheep’s clothing of diplomats and tell the Pro-Israel crowd what it wants to hear. Behind closed doors, to their own crowd and base they reveal how they truly feel. In radio addresses and sermons candidates like Erekat and Warnock speak with venomous hate, and shame on us if we keep falling for it.