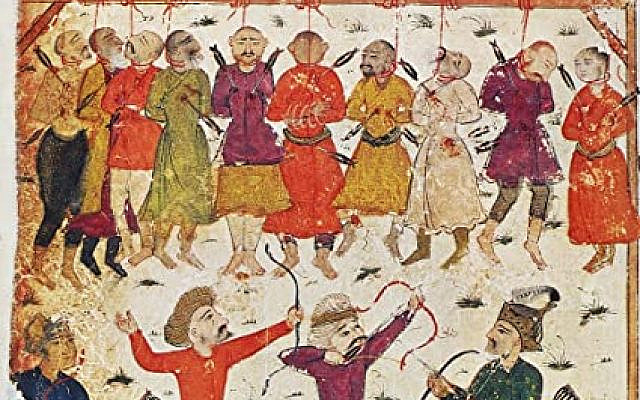 On the first day of my second degree, the 60-70 Hebrew-speaking classmates class were asked to say their names and where they worked to each other. I was so anxious, I wrote down some details to keep me anchored when it was my turn. I stood, looked down and saw I had also written my name — in case I forgot what it was.

It’s not uncommon. Chances are, you also find yourself more comfortable speaking in some contexts. Esther’s heroism comes in no small part from her breaking the silence and speaking to the king. But ultimately, in my view, she fails.

The traditional reading invites us to see Vashti as evil and Esther as good. Feminist re-readings of the megillah view Vashti as a hero as well. That she is cast out of her position for being independent, assertive, vocal, self-respecting and a party girl puts her in good company with all the women who break rules and must be punished. She’s with Eve, Cassandra, Pandora, Ursula in the Little Mermaid, and all the other independent, sassy, assertive, unbowed women who don’t do what they are told, and are then blamed for all the evil and suffering in the world, including their own.

Esther is so very good. She’s so good that despite being offered things by the servant Haggai before she meets the king, she wants nothing. What a model of modesty. She’s the perfect girl: beautiful, available to be commanded, with no needs, desire or opinions of her own. She is exquisitely silent.

Let’s face it: many of our foundational narratives that pretend to be about all of us were told by only a few of us and have served only a slice of humanity. This is why we love the story of Esther so much. At last! A heroine who is not just beautiful and good but brave! Yo!

Today, I work as a communications expert. (Yep, I’ve come a long way, baby.) Through that work, I meet women all the time who are also terrified to speak at work. They say things like:

I can’t sleep for two days before staff meetings / I hate the way I sound / Everyone else sounds amazing / So scared that I’ll forget what I want to say/ They’ll think I am an idiot/ What I know is obvious / I don’t want to ask a question — and be the only one who doesn’t get it/ My mouth is so dry, I can’t get a syllable out.

Even when our work environments invite us to speak freely, internalized fear of the cost of getting it wrong makes that terrifying so women continue to hope, far more than their male colleagues, that their good work will be noticed and rewarded a la Cinderella. The stories of Eve, Cassandra, and Vashti have done their work.

When told to go into the king, Esther says, “It could kill me.” While this king can clearly kill with a sweep of his decree, I can’t help but wonder if she is also just plain terrified of speaking up. And then she does something totally kickass, hardcore feminist. She organizes.

Think of how much the women who confront the Harvey Weinsteins, the Dan Sharonis, and the Malkah Leifers need each other. Think of all the women’s forums where we continue to come together to experience our voices in a freer way, to speak about the experience of being female, without being silenced or needing to qualify or explain our experience. Think of the Take Back the Night marches.

Of course, this strategy is used by all underpowered, marginalized groups — think Million Man March, think Pride Parade. What is too dangerous alone becomes possible together.

Ultimately, Esther must go into king alone, but, damn, is she careful and strategic. First, she does all the things a good girl does. She dresses to please, waits to be noticed and called, and then serves her man food and the rest. What does she ask for? A rerun.

Only during Feast2 does she reveal that she belongs to the people who are to be killed. Only then does she throw herself on his mercy.

And then she fails. Told that 500 and Haman’s 10 sons have been killed, she asks that Haman’s 10 sons hang as well. It is both brutal and irrelevant. Finally given a voice, she chooses to use it to reinforce what holding power has always meant: power over. She is Putin. She is the military coup. She is the same old, same old.

As women move into positions of power in numbers and capacities never seen before, this is the challenge: to not just behave as those who have come before us, but to bring to bear on the ways that we utilize our newfound power behavior that has been traditionally coded as female. Communication, compassion, home, hearth, care, softness, concern, inclusion, sensitivity, food, life-giving — Esther did none of these.