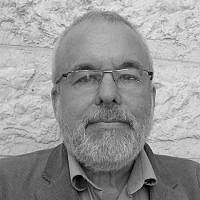 The Blogs
Ed Rettig
Apply for a Blog
Advertisement
Please note that the posts on The Blogs are contributed by third parties. The opinions, facts and any media content in them are presented solely by the authors, and neither The Times of Israel nor its partners assume any responsibility for them. Please contact us in case of abuse. In case of abuse,
Report this post.

Israel once had a commercial for a brand of bra. Women who wore it could “go with and feel without.” The ad seemed to me subversive political commentary masquerading as commercial copywriting. How much political behavior we can summarize in those four words?

Take the example of the governments of the 15 EU states. These warned their citizens against doing business with Jewish settlers. The Spanish Foreign Ministry declared: “The current situation could lead to disputes over land, water, quarries or natural resources … Companies must take into account that [financial activity in the settlements] is liable to lead to their involvement in breaking international law and violating human rights.” Haaretz then published an editorial suggesting that this portends further anti-settlement sanctions.

But this is a case of “feeling without.” The timing seemed perfect to gain minimal impact. Israel searched for, and then buried its murdered sons, 3 Jews and 1 Arab. Palestine reeled from its own-goals of the Fatah-Hamas coalition and the Hamas-perpetrated kidnapping. Syria engaged in civil war. Iraq reeled from the invasion by ISIS. Egypt started anew with al-Sisi. Jordan reinforced its borders as refugees flooded in and Islamists threatened invasion. Who would have the mental bandwidth to deal with finger wagging?

The announcements failed to generate a strong Israeli Foreign Ministry reaction. Allegedly this was because the warnings restated longstanding European policy. But there is another reason. Israeli trade with the EU comes to over 33 billion Euro. Exports to Israel are several billion Euro more than imports. Direct EU trade with the settlements is hard to gauge, but estimates are that it comes to less than 2% of EU trade with the country. Much of that trade is in the form of infrastructure building, that is legal under International Law. For example, a French court recently recognized the legitimacy of the Jerusalem Light Rail project. The EU can expand its boycott of Israeli economic activities in the Territories. They can punish banks that have branches in settlements, for example. But as the SodaStream fiasco showed, the primary victims could well be Palestinians. Moreover, boycotts come without guaranties. With the growing economic might of Asia, it is unclear that current EU markets are irreplaceable. The Europeans could find themselves having failed to move peace forward. But they will have sacrificed billions in European employment and profits that may not return.

Decision makers involved in this arena are doubtless aware of the basic math, which is what raises eyebrows over here. In the long-term, the EU warnings are likely to impact the Israeli economy on the margins, if at all. Is there real intent behind these statements or are they going through the motions?

Many note the effect of the drawn out process of issuing many separate warnings. One warning issued from each the economic powerhouse states of Europe. Then one warning issued from a dozen other states. The process has cost the Europeans nothing while suggesting that they are doing something.

This is why the relaxed Israeli response may be misguided. The EU warnings give us an opportunity to discuss deeper reasons for concern. The EU’s concept of the illegality of the settlements has two troubling corollaries. First, “legal” and “moral” are not synonyms. Americans know this. In many parts of the United States, sexual relations and marriage between Whites and Blacks were illegal. So-called “anti-miscegenation” laws criminalized such conduct. It was not until 1967, in the delightfully named case of Loving vs. Virginia, that the Supreme Court declared these laws unconstitutional. Forbidding mixed-race marriage was legal and immoral during most of the history of the United States. There is a similar immorality implicit in the EU stance. The late leader of the Israeli peace camp Lova Eliav opposed settlements. He thought them incompatible with the pragmatic needs of peacemaking. But he often noted that it is quite another matter to imagine Jews have no right to live in those parts of their homeland.

Palestinian law forbids Jews as such from moving into the area. EU policy endorses this Palestinian law which is to say, discrimination on the basis of ethnicity. The assumption of illegality applied to the settlements elides the question of morality. Is it moral to forbid Jews as Jews to live in a certain area.

Second, in sanctifying the international system, EU lawyers ignore its record on non-Muslim minorities. There are 57 countries in the UN who are members of the Organization of Islamic Cooperation. They are almost all hostile to one country, Israel. Lacking effective checks and balances, the international system does not always provide Israel with a fair hearing. The EU has internalized some of the inappropriate results of that situation. When its policies ignore discriminatory ramifications, Brussels does no service to its moral standing , but ignoring them does not make them disappear.

The EU comes out of this series of finger wagging announcements without diplomatic gain. In moral terms its results are questionable where they strengthen discriminatory Palestinian attitudes. In political and economic terms its policies are likely to be inconsequential. Like in the bra commercial, the EU diplomats probably feel like it is going “with” by by making a great many announcements, while in practical, moral and political terms it can still feel like it is “without.”

This is the first posting in my new blog at www.familiarworries.com, where you can also find many of my earlier publications. Come on by and take a look.