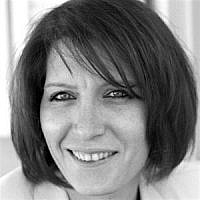 The Blogs
Olga I. Deutsch
Apply for a Blog
Advertisement
Please note that the posts on The Blogs are contributed by third parties. The opinions, facts and any media content in them are presented solely by the authors, and neither The Times of Israel nor its partners assume any responsibility for them. Please contact us in case of abuse. In case of abuse,
Report this post.

Christmas and New Year’s is one of nicest times in Europe. Decorated streets, the aroma of gluhwein and cinnamon in the air, carols at every corner. In Israel, too, a similar atmosphere is present at Christmas markets and concerts in Jerusalem, Nazareth, Haifa, Ramla, and Tel Aviv-Yafo, and a Christmas parade of 30,000-strong participants in Nazareth.

But while the Europeans officially and privately take the time off to rest, recuperate, and prepare for the next calendar year, in Israel, largely thanks to controversy over European money, this Christmas season has been less than tranquil.

Israeli society has found itself in midst of an overheated public debate on NGOs (non-governmental organizations). Two groups in particular, Breaking the Silence (BtS) and Im Tirzu, have been hitting the headlines for weeks.

BtS is an anti-occupation NGO, which publishes anonymous and often unverifiable testimonies in order to create a narrative that Israeli forces commit war crimes and other violations. Representatives of BtS travel the world repeating these stories, appearing in parliaments and before United Nations bodies, on university campuses, and in the media.

On the other side, the right-wing NGO Im Tirzu issued a highly aggressive video targeting the leaders of human rights NGOs and labelling them as “moles” and “foreign agents” due to their receipt of foreign government funding.  The video awoke public outrage and a series of condemnations.

The attacks by the two NGOs became personal and ugly, degrading the public debate and taking it to a completely wrong place.

In the heat of this sensationalism, Israeli policymakers have proposed new legislation that targets NGOs and their funding. A bill submitted by Minister of Justice Ayelet Shaked, which was passed in the Ministerial committee yesterday, would require representatives of all NGOs that receive significant contributions from foreign governments to disclose such affiliations in their publications and when addressing committees in the Knesset (Israel’s parliament).

Voices from Europe were heard immediately, raising concerns regarding Israeli democracy and comparing the Knesset proposals to restrictions in Russia.

The truth is that the Im Tirzu/BtS episode brought a far broader and more acute issue to the surface — the role that the European Union and other European governments play in influencing public discourse and policies in Israel.

BtS gets its money directly or indirectly from European governments (including Sweden and Switzerland), to promote their political agenda. The European Union, for instance, is reported as BtS’s largest single donor of 2015, but that list includes the governments of Switzerland, Holland, Sweden, and Denmark, as well as government-funded churches in Denmark, Ireland, and the UK.

The issue of foreign governmental funding to NGOs touched a nerve with Israelis from all walks of life, from right to left, from politically outspoken to non-affiliated.

Many criticized BtS for taking an internal Israeli debate abroad and for defaming the Israeli military, while at the same time opposing any restrictive legislation towards NGOs.

Their outrage was also directed at European funders for making their grants conditional on BtS obtaining a minimum number of negative “testimonies” to publish outside of Israel. This fueled suspicions that real objectives are creating a negative image of Israel and the IDF, as opposed to promoting human rights. Consequently, BtS’ ability to address the Israeli public has been completely undermined.

While advocating for political positions is legitimate, foreign government funding to NGOs to advance those same goals is seen as a form of neo-colonialism and an attempt to use NGO allies to circumvent diplomacy.

With nearly 39,000 registered NGOs, Israel has a vibrant civil society that should be further supported, financially and otherwise. However, foreign governments must be aware of the political havoc they enable through their selective funding policies that lack both transparency and political accountability.  European taxpayers’ money should be spent responsibly so it can make a lasting contribution to peace and stability. Current practices leave room for misuse by NGOs, which use European funds to attack Israel’s moral standing and single it out internationally. For most Israelis this is a clear red line.

In the spirit of the seasonal holidays, Europeans should ensure that while they are away on holidays, their money works to promote the message of peace, respect and stability. Unfortunately, as seen the past few weeks in Israel, the impact of European funding to NGOs is otherwise.

About the Author
Olga I. Deutsch is NGO Monitor’s Europe Desk Director. Olga graduated from the universities of Belgrade and Munich with degrees in banking, insurance and finance. She was awarded a Fellowship with the Ford Motor Company graduating as a Community Leader at the School of International and Public Affairs of Columbia University in New York, USA. Before making Aliya in 2009 she served as the chairperson of the European Union of Jewish Students, an umbrella organization for 34 national unions. In 2008, she received the International Leadership Prize from the American Jewish Committee. Over the past twelve years Olga held senior positions in the private sector in Europe and Israel. Olga is fluent in Serbian, English, Hebrew and German.
Comments