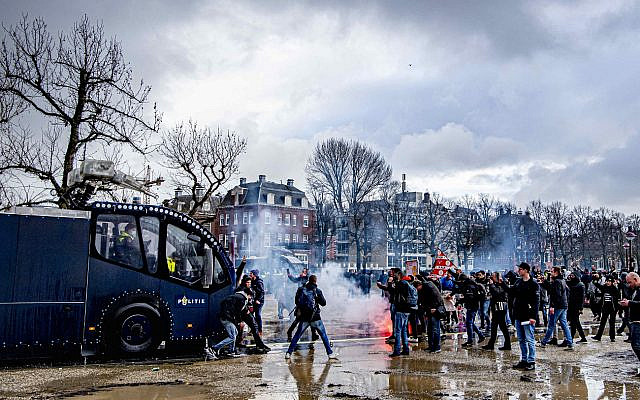 Hundreds of protestors not wearing face masks clash with Dutch riot police at an illegal protest against the Netherlands' new lockdown measures in Museumplein on January 17, 2021 in Amsterdam, Netherlands. Photo by Robin Utrecht

Look at what is happening in Europe: The Dutch government resigned in its entirety over a childcare subsidies scandal; the Italian government is on the brink of collapse; Germany’s chancellor, Angela Merkel, is stepping down and the political future is uncertain; and Estonia’s Prime Minister, Juri Ratas, resigned over a corruption scandal and his government collapsed. If this is not enough, in Belgium and France, violent riots broke out as immigrants and members of radical political groups smashed windows, torched cars and a police station, and injured dozens of law enforcement personnel. Besides all the above, the coronavirus is spreading like never before, claiming thousands of lives each day despite the vaccines and the closures.

This is not a coincidence. We are experiencing the integrality of the world, its inexorable interconnectedness. We are dependent on each other on every level. Covid-19 forced us to acknowledge that contagion anywhere is contagion everywhere. Now we have to advance to the next phase in our awakening and realize that a crisis in anything is a crisis in everything. The coronavirus wrecked the global economy, tore up the society in countless countries, and as a result, governments are falling apart. This is all part of the same process: the collapse of the old, individualism-driven world, which is now crumbling in a global domino effect.

The crisis is everywhere. The global interdependence behooves global coordination and collaboration. It only makes sense that if we are dependent on each other, we will cooperate in order to make things better for all of us.

While many have already realized that we are dependent on each other, this is not enough. Now we must also realize that we are responsible for one another! Currently, countries are behaving like mountain climbers scaling an impossibly steep cliff. They realize that they are all tied together, but instead of using their mutual dependence to help each other to the top, they are trying to tear the ropes that hold them together and climb on each other’s head on their way to the top. Any novice climber will tell you that there is only one result that such an attitude can yield, and it is not a good one. The only way up is together, by watching out for one another, making sure that everyone has a good grip on the rock, and that if someone slips, the others will hang on until he can find his footing again.

The escalating global mayhem should teach us that we are in absolute interdependence and there is no point trying to take down any country because we will all go down with it. Look at what happened in the presidential election in America: Suddenly, we realize that everyone is meddling with the election in America: Russia, China, Ukraine, Iran, as well as other countries. There is no point pretending that we didn’t know. It can’t be any other way! If what happens in one country influences all the other countries, naturally, those other countries will want to influence what happens everywhere. Everyone does it to everyone so there is no point pretending that it doesn’t happen.

The problem is that such a game can last only so long, and we are nearing its end. The spiraling collapse of governments and societies indicates that we are nearing a total breakdown. When that happens, we will be left with one of two options: The first, and less likely, is that at the last minute, governments will get a grip on their power hunger and agree to establish balanced connections that are acceptable to everyone and guarantee the well-being of all the countries in the world. The second, and regrettably more likely option, is that the ruthless tug of war will end in total destruction, a nuclear world war. The local collapses of the past months have been warning signs. If we don’t heed them, the big one will follow.