As they prepare to pick a new president tomorrow, the French would benefit from reflecting on – and in many cases, especially among young people, learning about – another seminal event that occurred, almost to the day, 30 years ago.

On May 11, 1987, France began trying Lyon-region Gestapo chief Klaus Barbie for his World War II crimes against humanity. At the time, he was a household name in Europe. This stemmed not from his murder of 4,000 to 10,000 people – a rather pedestrian figure for a Nazi officer – but from his capture, torture and killing of French resistance fighters.

Barbie landed a top spot on France’s hit list when he extinguished its symbol of non-surrender, Jean Moulin.

Although rarely mentioned, Barbie’s trial continues to affect French thinking and may be indirectly influencing the 2017 presidential elections. Both candidates emphasize moving past the past:

• Right-winger Marine Le Pen designs to wash away the historical guilt she believes has burdened her countrymen. She has rejected the notion of French participation in the Holocaust. “Our children are taught that they have every reason to criticize [France], to see only the darkest historical aspects,” she said. “I want them to be proud to be French again.”

Le Pen stands at the blackboard of French history wielding an eraser. But memories of the Barbie trial should wring her hands.

Initially, the French applauded Nazi hunter Beate Klarsfeld for snatching Barbie from Bolivia, where he found a safe haven until the political landscape changed in the 1980s. But they started having mixed feelings as it became clear that the trial would force them to face their participation in the Final Solution, the Nazis’ systematic effort to murder every Jewish man, woman and child on the planet.

Indeed, Barbie’s attorney, Jacques Vergès, declared exposing France’s role in the Holocaust the core of his strategy. Although it failed as a legal scheme – the court sentenced the “Butcher of Lyon” to life in prison, where he died four years later – it proved potent as a cultural weapon.

For ostensibly the first – and for many, last – time, the French had no choice but to collectively examine this dark chapter, which included such ugly incidents as the Parisian police delivering 13,000 Jews to their German occupiers in the summer of 1942.

The Jews, many of them children, were held for five days in inhumane conditions in several Parisian venues, including the Olympic stadium, Vel d’Hiv, which became the roundup’s namesake. The Nazis then deported them on jam-packed, Auschwitz-bound cattle cars. Few survived.

Le Pen wishes to rid France of this memory, too.

“I don’t think that France is responsible for the Vel d’Hiv,” she said. “I think that in general, more generally, if there were those responsible, it was those who were in power at the time. This is not France.”

For Le Pen, the Barbie trial and what it symbolizes may turn out to more than a conduit of inconvenient truths. She knows that it could pose a political obstacle. Last week, she fired Jean-François Jalk, interim leader of her party (the National Front), for applauding a Holocaust denier 17 years ago.

Although this all plays into Macron’s hands, he should hold off on ordering truckloads of champagne. Yes, he is projected to win. But we have seen similar prognostications miss their mark recently in the United Kingdom and America. This voice-of-reason French candidate is beatable. At 39, he is a political baby. He shows up at campaign events with his former junior high teacher – 24 years his senior – who is now his wife. And he is vulnerable to Le Pen attacks on his ability to protect France from terrorism.

The Barbie trial implications could boost his chances. Looking back at Europe’s Trial of the Century may motivate some eligible voters to exercise their democratic right just to block Le Pen.

The 1987 Barbie trial gave the French little choice. They had to face their past. The 2017 presidential elections give them a clear choice. 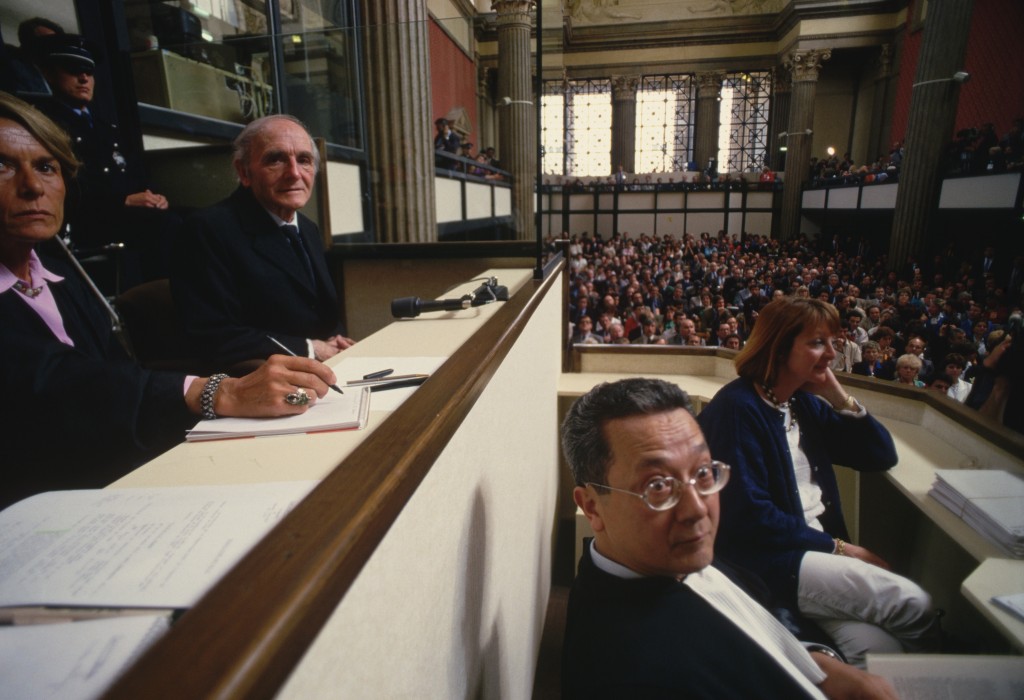 The French tried Gestapo commander Klaus Barbie for his World War II crimes against humanity 30 years ago.
About the Author
Boaz Dvir is the author of “Saving Israel” (Rowman & Littlefield, 2020), which follows the journey of World War II aviators who risked their lives and freedom in 1947-49 to prevent what they viewed as an imminent second Holocaust. The Washington Times book reviewer Joshua Sinai described this nonfiction book as a “fascinating and dramatic account filled with lots of new information about a crucially formative period.” Dvir is also a Penn State University assistant professor and an award-winning filmmaker. He tells the stories of ordinary people who, under extraordinary circumstances, transform into trailblazers who change the world around them. They include an average inner-city schoolteacher who emerges as a disruptive innovator and a national model (Discovering Gloria); a World War II flight engineer who transforms into the leader of a secret operation to prevent a second Holocaust (A Wing and a Prayer); an uneducated truck driver who becomes a highly effective child-protection activist (Jessie’s Dad); and a French business consultant who sets out to kill former Nazi officer Klaus Barbie and ends up playing a pivotal role in history’s most daring hostage-rescue operation (Cojot).
Related Topics
Related Posts
Comments