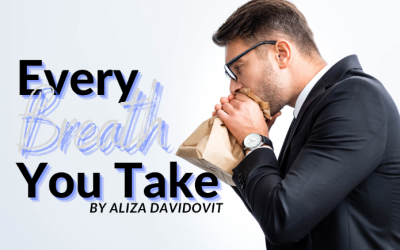 As an emphatic way to describe an experience, people often use the expression, “It took my breath away.” I too, like everyone else, am moved by things and happenings. But, in honesty, I can’t say that anything ever took my breath away other than a cardio workout. But then, unfortunately, something did. My father died. He passed away at home from a brain tumor. I watched and listened as his breathing became evermore shallow and irregular and then it stopped. And then he died. My beloved father, David, my best friend, was gone, because the Almighty had ceased to grant him the gift of breath.

That day, my breathing also changed. I physically suffered from shortness of breath for years to come, even though my life went on, albeit, with many more heartaches along the way. I sometimes found myself seeking air in a brown paper bag. And it was only a few years ago that I realized that although I was religiously observant, I wasn’t living with faith.

I don’t recall which rabbi said the following, but his words became my new oxygen. “If one cannot catch one’s breath, how can one claim to be connected to Hashem and to be living in faith?  With worry and fret we are trying to catch tomorrow’s breaths today, and we thus overload our system with fear instead of faith.” We strive to catch the breaths that have not yet been allotted to us. That was so me, trying to pack in a year’s worth of breaths to get through a singe day.

We read in the Book of Genesis how G‑d breathed the breath of life into Adam. G-d’s breath is our animating force. Yet, often we forget that and become burdened by grief, fear and disappointment; we disconnect from G-d and go breathlessly through the motions of our life.

For many years I’d think about my editor’s life motto: “It ain’t Auschwitz, keep on truckin.” This sometimes helps, but it has the duration of a meme that one scrolls through in a social media feed.

What helps more are the words of Dr. Edith Eger, a Holocaust survivor whose mother was selected for death by Dr. Mengele before her own eyes: “Part of me was left in Auschwitz,” she said. “But not the bigger parts and not the better parts.”  No matter what happens, when we walk with G-d the better part of who we are is always with us.

Thus, no matter what happens to us, we must not yield our breath back to G-d before our time, but rather get even closer to Him and step deeper into the Torah. For the Lord is the only oxygen and faith is the “ventilator” that connects us.

In a recent interview, Lewis Howes asked Dr. Eger her definition of greatness, and her answer encapsulates a major Torah value, “Show up for life.” And she did. How about you?

We learn this empowering life lesson from our forefather Jacob in this week’s Torah portion of Vayishlach.   Jacob’s life story is marked by heartache and challenges. He was forced to run away from his home because his brother Esau threatened  to kill him;  his father-in-law Lavan deceived him by switching his bride Rachel with Leah, and changed his wages on a daily basis for 20 years; he wrestled with an antagonistic angel and was left limping; his daughter Dina was raped; his sons started a war to avenge their sister’s abduction after making a peace agreement; his favorite wife Rachel died  in childbirth; his mother died  after he fled his brother at her behest;  his firstborn son Reuven interfered in his marital relations with his concubine; his son Joseph disappeared  for 22 years after his brothers sold him into slavery.

Jacob’s life sounds like a Netflix drama of at least 7 seasons. But true to his name Jacob, which means the heel of a foot, He propelled himself forward in life. His heartaches did not become his Achilles heel and ruin him. Nor did he use them as excuses to spurn G-d.

Jacob breathed because he believed.

In the Book of Shemot, we learn that when Moses spoke to the Children of Israel and told them that G-d would deliver them from bondage, they did not listen because of shortness of breath and because of their hard labor. The shortness of breath reflected their state of mind. And in their troubled state of mind, they abandoned hope of redemption. They lost faith in G-d’s promise.

How often in our own lives do we get locked into our emotions and a negative mindset and forget to breathe? This runs counter to logic.  One need not be a scientist to know that one has to breathe to live. But even more than that, Judaism teaches that the entire world was created with the breath of G-d. When we step out of faith, we are disconnected from our life Source. We become overwhelmed by stress which affects our nervous systems. Studies show that people of faith live longer.

It is no coincidence that people who meditate and practice breathing exercises are able to heal many serious ailments. Rabbi Nachman taught that deep and focused breathing is a formula for a fulfilling life.

As Martin Luther King Jr. once said, “Faith is taking the first step even when you don’t see the whole staircase.” But if you want to climb it, you have to breathe, to let go and let G-d.

And I’ll end with lyrics from a song written by an English rock band called The Police. But just pretend it’s G-d singing them to you:

About the Author
Aliza Davidovit is a journalist and author with a master’s in Journalism from Columbia University; She interviews prominent individuals who have an impact on Jewish life and the State of Israel; She is a contributing editor to numerous venues, appeared regularly on Fox News Live and worked at ABC News and Fox News; She writes a weekly biblical commentary: "The Source Weekly"
Related Topics
Related Posts
Aliza Davidovit