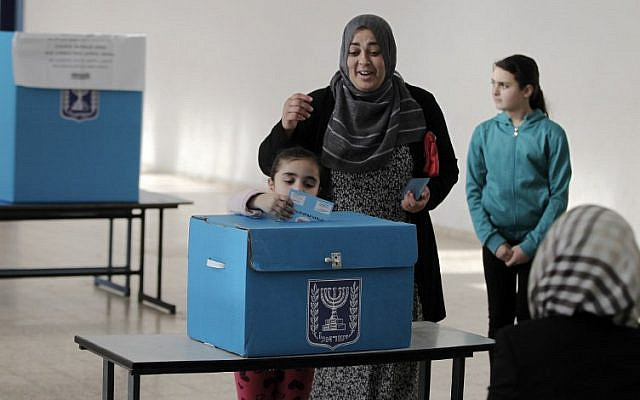 An Arab Israeli girl casts her mother's ballot at a polling station in the northern Israeli town of Umm al-Fahm on March 17, 2015. (AFP/Ahmad Gharabli/File)

The Israeli polity is suffering from an extreme case of election fatigue. The fifth round of elections, while embodying the multiple symptoms of this condition, hardly negates their importance. Whatever every citizen does — or does not do — on November 1st makes an immense difference to determining what will, can, and should happen here in the years to come.

Ostensibly, elections are a mechanism for gaining and retaining power non-violently. They are not exclusive to the democratic world: they are a common ritual for claiming legitimacy in a variety of regime forms. Their meaning, therefore, lies not only in deciding the formal balance of power at a given moment, but also in illuminating regime patterns and state capabilities over time. Their importance, in Israel as elsewhere, therefore goes far beyond their results the day after the ballot.

In one way or another, vying political parties and social agents address all these elements, especially on election eve. Their appeals to the public draw on a mixture of rational arguments, personal preferences, and diverse emotions, encompassing differing dosages (among others) of hope and fear, attachment and alienation, frustration and disillusionment, anger and indifference, sense of belonging or exclusion, and even collective revulsion and communal cohesion.

This campaign is not taking place in a vacuum. It has been heavily influenced and molded by the rules of the political game designed by leaders at various junctures to promote their own interests at the expense of their rivals. The latest set of elections have been shaped by the 2014 decision to raise the threshold for party representation in the Knesset from 2% to 3.25%, which forced several parties to merge, thus cementing the division between the right and the religious ideological-political bloc on the one hand and the center-left bloc on the other.

This bifurcation was further exacerbated in the last four rounds by fragmentation within each of the camps, with splinter parties carrying excessive weight in the prevention or construction of increasingly unstable ruling coalitions. Inevitably, therefore, Israel has reached what is the fifth set of elections in the past three and half years more polarized, fragmented and incapacitated domestically — and more uncertain of its place in a fluid global and regional environment externally — than ever before.

This election campaign, as it is both vituperative and sluggish, embodies the complexities inherent in the current context. Thirty-nine lists are competing for seats in the forthcoming 25th Knesset — matching the all-time high recorded in the first round of elections in the current cycle in early 2019. In that ballot, 366,000 votes were cast for parties that did not pass the electoral threshold — accounting for 8.5% of the vote (10 potential mandates in Israel’s 120-seat parliament).

Today, the number of parties hovering slightly below or above this threshold can make all the difference between yet another deadlock and a small majority for one of the two blocs. Beyond a last-ditch attempt to sway the dwindling of yet undecided voters estimated to reach a mere 60,000, each side is bent on increasing voter turnout on their end and deflating it as much possible in the ranks of their opponents. So now all efforts have been focused narrowly on these twin elements (and the weather, which is less subject to human manipulation).

The near-obsession with participation rates and reaching the magic 3.25% threshold has unleashed a further spurt of populism which feeds on a sense of deprivation, marginalization, and insecurity stemming from divergent ethnic, religious, and national sentiments. It has also been marked by authoritarian propensities designed to promote personal interests through institutional changes that threaten to alter what is left of the checks and balances in Israel’s main institutions and have prompted growing alarm in broad circles regarding their impact on Israel’s increasingly shaky democratic scaffolding. And it has been affected by the uneven performance of the outgoing Bennett-Lapid government in various areas and its limited capacity to initiate changes in the critical sphere of Israeli-Palestinian relations. The combination of these factors has made the present campaign both distasteful and extremely acrimonious.

It is unclear what effect these actions will have on many already hesitant citizens. The assumption that the number of voters who do exercise their civic right must rise above the 67% who took part in the last elections is only of limited value, since there is no assurance of what they will do inside the polling booth. Some will vote their preferences or act strategically to prevent those of whom they disapprove from gaining further traction. Others may select parties with no chance of gaining a seat or express their dissatisfaction with available choices by casting blank ballots (which are neither calculated in determining the threshold nor counted in the allocation of seats). In this respect, it is important to recall that the higher the voter turnout, the greater the number of votes needed to secure a seat in the Knesset. The battle over every single vote will continue nevertheless, until the closing of the polls and into the count of the special ballots cast by emissaries abroad and by members of the armed forces.

The main benefit of getting out the vote therefore lies primarily in the distribution within the blocs, especially but by no means exclusively, for the Arab community inside Israel (although voter turnout in local elections is over 85%, a full 55% of Palestinian citizens of Israel did not participate in the 2021 general elections). Many, it now appears, will not show up at the polls, either because they feel that they cannot make a difference, because they have lost confidence in their representatives in recent years, because they do not feel an integral part of the Israeli system — or because of all of the above.

The prospect of a serious contraction in Arab representation in formal institutions has immense implications that go well beyond the precise tally of election results. Together with their Jewish counterparts who prefer to go shopping, visit friends, or stay at home on polling day, they portray a picture of rising alienation from Israel’s regime and the increasingly introspective notions of Jewish supremacy they have either purveyed or let go unchallenged in recent years. Citizen dissociation from formal politics leads to lesser institutional effectiveness and to a decline in state capacities. These lay the groundwork for possible internal implosion and raise the risk of growing external explosion.

These concerns are what make these elections so pivotal. Maintaining existing patterns cannot on their own resolve these issues, but any shift in the current balance of power may hasten further deterioration. Upholding the uneasy stalemate has the advantage of buying time, but such an eventuality carries meaning only if it is used to jump-start significant change. Pursuing alternative directions, mostly informally, may help elaborate a more inclusive and egalitarian vision for all the citizens of the country and craft a workable strategy for its achievement, but this will remain theoretical without the political power — broadly conceived — necessary to make it happen.

Each one of us, given these different options and where they lead, has to decide what course take. However you spend election day, you will be making a difference. We will all live with consequences.