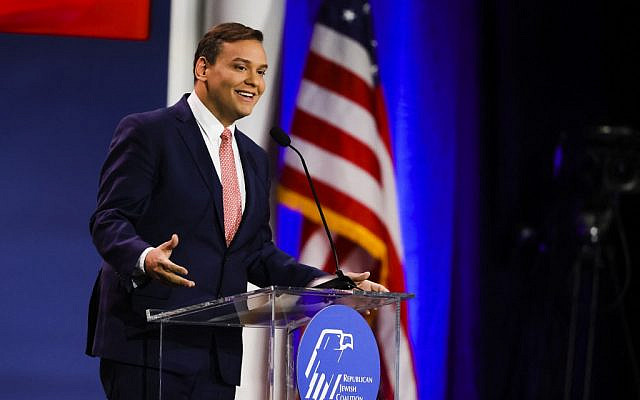 Among the many false claims made by George Santos in his recent run for Congress was the assertion that he has Jewish roots, that his grandparents’ lineage made him “Jew-ish.” Even when it was shown that his grandparents were Catholics born in Brazil, not Jews who fled the Nazis in Europe as he had claimed, he and his defenders still clung to the Jew-ish idea.

This might all seem funny, a classic “gotcha” moment in politics, but for Jews, it’s deadly serious, for three key reasons.

First, he is playing us for fools by assuming that Jews are so superficial about their voting choices, that all that we care about is whether the candidate is Jewish. If tribe were all that mattered, Jews would be clamoring for a presidential ticket of Bernie Sanders and Stephen Miller. While some Jewish voters might be flattered that someone wants to be so associated with the Jewish people, it is supremely insulting to our intelligence to believe that such lies wouldn’t eventually be found out.

Second, while many politicians have embellished resumes before, no member of Congress, to my knowledge, has falsely added “Holocaust survivor” to the family curriculum vitae. By doing that, Santos is committing an act of historical distortion that rubs up against Holocaust denial. If you are going to be so callous with facts having any connection to the Holocaust, you are throwing shade onto a topic that should be kept pristine and unvarnished. The truth of the Holocaust should never come within a mile of such political con games. In my mind, that is disqualifying — and his Jewish constituents should be furious about it.

Finally, we are at a crucial inflection point in Jewish history with regard to the age-old question of “Who is a Jew,” and Santos did not do the Jewish people any favors with his lie. Far-right members of the new Israeli government want to revise the Law of Return, writing off thousands who may not be Jewish from the perspective of Jewish law, having just one Jewish grandparent, but who see themselves as full-fledged members of the Jewish people. The revision of this law and other aspects of the “Who is a Jew” debate (such as conversion), could cause a permanent fissure between Israel and diaspora Jewry.

These laws, ironically based on Nazi-era racial “purity” mandates, were adapted by Israel to protect those with Jewish ancestry from persecution. One Jewish grandparent was enough. This liberal interpretation of Jewish lineage was crucial in the rescue of millions of Soviet Jews in the 1970s and ’80s and in the immediate acceptance of highly assimilated American Jews for programs like the successful Birthright Israel trips for young adults, and for immigration.

And since last February, it has proven invaluable in assisting Russian and Ukrainian Jews to escape from Russian attacks.

By stepping on this landmine so clumsily, Santos just gave a heaping helping of propaganda to those, including many Israelis, who think American Jews don’t take their Jewish identity seriously. What a joke, they can say — even a South American Catholic thinks he’s Jewish enough to qualify for Israeli citizenship as a Jew. Who’s next? The pope?

I invented the expression “Jew-ish.” At least I think I did, in a column for the New York Jewish Week in 2009. As I wrote there, the usage of “ish” was just becoming trendy at that time.

The suffix ‘ish,’ indicating approximation, is increasingly popular among today’s youth, according to the language forum, ‘Wordreference.com.’ Kids are constantly tossing it about: A movie is ‘creepish,’ he looks ‘Europeanish,’ the dress is ‘greenish’ and the meeting begins at ‘five-ish.’ In an age where fluidity is the norm, and everything, from the national debt to Arlen Specter’s party affiliation, is a moving target, we all need to learn how to go with the flow. Fortunately, we Jews are uniquely prepared to do just that: We already have ‘ish’ in our name.

My essay was a response to interesting testimony emerging from the Iberian peninsula. A team of geneticists had uncovered explicit evidence of mass conversions of Sephardic Jews to Catholicism in the 15th and 16th-century. The study, based on an analysis of Y-chromosomes and reported first in the American Journal of Human Genetics, indicated that 20 percent of the population of the Iberian Peninsula has Sephardic Jewish ancestry. That’s about 10 million people.

While antisemitism remains pervasive and the Jewish population microscopic, there is a deep fascination in Spain and Portugal with all things Jewish. “We’ve gone from a period of pillaging the Jews and then suppressing and ignoring their patrimony to a period of rising curiosity and fascination [about them],” said Anna Maria Lopez, the director of Toledo’s Sephardic Museum in a New York Times interview.

So while there are almost no Jews left in Spain, a residue remains, literally in their DNA.

“Everyone’s a little bit Jew-ish,” I observed, “even if almost no one is a Jew.”

I subscribe to traditional standards in determining Jewish identity, but the world has become far too complicated to ignore everyone else. So, yes, there are Jews, the ones who fall within normative halachic parameters; and then there are those who are Jew-ish, a group that includes many millions more.

But George Santos, who claimed Jewish ancestry as part of a despicable con, is not one of them.

So I think I coined the ish term. But I can’t be sure. One might say that I’m the inventor-ish of Jew-ish. But I’m not so bold as to put it into my resume.

George Santos might want to think about taking it out of his.

About the Author
Award-winning journalist, father, husband, son, friend, poodle-owner, Red Sox fan and rabbi of Temple Beth El in Stamford, CT. Author of Mensch-Marks: Life Lessons of a Human Rabbi – Wisdom for Untethered Times and "Embracing Auschwitz: Forging a Vibrant, Life-Affirming Judaism that Takes the Holocaust Seriously." His Substack column, One One Foot: A Rabbi's Journal, can be found at https://rabbijoshuahammerman.substack.com/ Rabbi Hammerman was a winner of the Simon Rockower award, the highest honor in Jewish journalism, for his 2008 columns on the Bernard Madoff case, which appeared first on his blog and then were discussed widely in the media. In 2019, he received first-prize from the Religion News Association, for excellence in commentary. Among his many published personal essays are several written for the New York Times Magazine and Washington Post. He has been featured as About.com's Conservative representative in its "Ask the Rabbi" series and as "The Jewish Ethicist," fielding questions on the New York Jewish Week's website. Rabbi Hammerman is an avid fan of the Red Sox, Patriots and all things Boston; he also loves a good, Israeli hummus. He is an active alum of Brown University, often conducting alumni interviews of prospective students. He lives in Stamford with his wife, Dr. Mara Hammerman, a psychologist. They have two grown children, Ethan and Daniel, along with Cobie, Casey and Cassidy, three standard poodles. Contact Rabbi Hammerman: rabbi@tbe.org (203) 322-6901 x 307
Related Topics
Related Posts
Joshua Hammerman