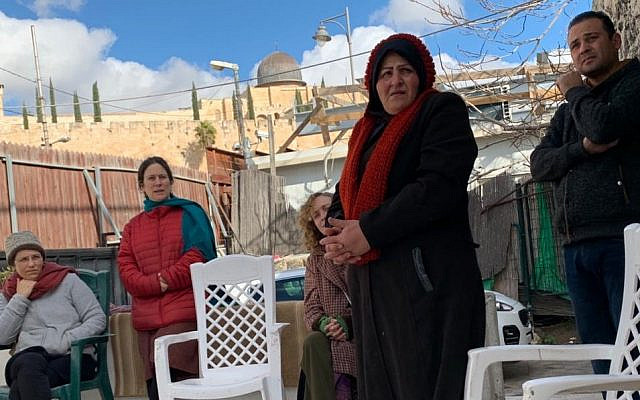 In the 1980s, a few dozen properties were taken from Palestinian families under a scheme between settler organizations, governmental bodies, and a subsidiary of the Jewish National Fund (JNF-KKL). In 1989, without consulting or informing the family, the JNF-KKL subsidiary initiated a procedure that resulted in the home of one of those families, the Sumarin family of Silwan, being designated as absentee property. At that point, the property was purchased by the Jerusalem Development Authority, who later sold it to the JNF-KKL subsidiary. In 1991, the JNF-KKL subsidiary filed an eviction suit against the Sumarins. The lawsuit was dismissed, and in 1992, the original scheme was stopped by a special investigative committee. But the confiscated properties were not returned to their Palestinian owners; each family faced a protracted legal battle to avoid eviction. For the Sumarins, this dispute has been going on for almost 30 years. In September 2019, the Jerusalem Magistrate’s Court accepted a renewed eviction claim, with the outcome that the Sumarins were required to leave the house within 3 months and pay tens of thousands of shekels in legal fees and other expenses. They appealed, and their case returns to court on 30th June 2020. This is an attempt at an extremely simplified summary of the Sumarins’ situation. You can read a detailed account of the history here.

In the first of the two parshiot, Be-har (Lev 25:1-26:2) and Be-Hukkotai (Lev 26:3-27:34), we read this coming Shabbat, God makes an extraordinary statement: ‘The land is mine’ (Lev 25:23). The backdrop for his unprecedented claim is not, as we might have expected, the conquest of the land, but the laws of buying and selling property.

According to Leviticus 25, you can buy and sell property, but only on a temporary basis – in other words, leasehold, not freehold. At the time of the Jubilee, which occurs every fifty years, all property (other than houses in walled cities) must be returned to its original owners, or to members of their families.

In the meantime, a property buyer must, if requested, sell any property he has purchased to a redeemer. The redeemer is a designated close family member of the seller who acts to keep the property in the family fold. The seller himself can also ‘redeem’ his own property; perhaps he sold under duress – say after a failed harvest – and now has the means to buy it back.

These restrictions on the sale and purchase of property prevent it from moving permanently from one family to another. Then as now, property is wealth, and this minimizes financial inequality between families. The restrictions also discourage property speculation motivated by profit. But above all, especially as they are set out here in Leviticus, they limit the potential for the exploitation of individuals through property transactions.

In Leviticus in general, and this parsha in particular, it is not always easy to read the human drama between the lines. But if we want to know what exploitation through property looks like in practice, we need only turn back to the Joseph narrative.

There was famine in the land of Egypt, but, acting on advice from Joseph, Pharaoh had stored sufficient grain to feed Egypt and its neighbors for the duration of the famine. When the Egyptians ran out of money to buy the grain in Pharaoh’s storehouses, they paid with livestock. When they ran out of livestock, they offered to pay with their land and bodies, rendering themselves completely destitute.

Genesis 47:20 So Joseph bought all the land of Egypt for Pharaoh. All the Egyptians sold their fields, because the famine was severe upon them; and the land became Pharaoh’s. 21 As for the people, he made slaves of them from one end of Egypt to the other.

This is where God comes in. The property laws in Leviticus ensure that what happened in Egypt can never happen in the land of Israel. For three reasons, Israelites can never be forced to sell their primary source of livelihood under duress to a human ruler who could then, or at any future time, exploit them ruthlessly.

First, the human ruler, like any other buyer, would be required to return their land to the seller or his family at the time of the jubilee.

Second, the human ruler, like any other buyer, would be required, if requested, to sell back the land he purchased to a redeemer or to the seller.

This year, when Be-har is read together with Be-Hukkotai, we will not read the haftarah, the reading from the prophets, designated for Be-har. But I’ll turn to it now because it both exemplifies the kind of the human story that could lie between the lines of Leviticus and highlights the theme of exploitation that is central there.

The haftarah for Be-har is Jeremiah 32:6-27. The setting is the kingdom of Judah at the time of the Babylonian invasion in the 6th century BCE. Jeremiah is about to undertake an action which takes place in the real world but is also symbolic. Jeremiah’s cousin Hanamel comes to him and asks him to redeem some property that Hanamel owns in a place called Anathoth.

This transaction is different from those outlined in Leviticus. Hanamel himself is the seller, not a third party who had purchased his land. Nevertheless Jeremiah 32 seems to have in mind the rules of Leviticus 25. Perhaps the details were not important – the main value of the action is, after all, symbolic. Or perhaps redemption could work proactively, preventing people in advance from selling land under duress outside the family. That would certainly make sense in the setting at hand – conquest by a foreign enemy. Even Jeremiah was reluctant to buy his cousin’s property in that politically precarious situation.

The point of Jeremiah’s symbolic purchase is to underline God’s commitment to returning Israel to its land when the Babylonian invasion is over. But what comes next takes us back to Leviticus’s theme of property and exploitation.

Jeremiah 32:9 And I bought the field at Anathoth from my cousin Hanamel, and weighed out the money to him, seventeen shekels of silver. 10 I signed the deed, sealed it, got witnesses, and weighed the money on scales. 11 Then I took the sealed deed of purchase, containing the terms and conditions, and the open copy; 12 and I gave the deed of purchase to Baruch son of Neriah son of Mahseiah, in the presence of my cousin Hanamel, in the presence of the witnesses who signed the deed of purchase, and in the presence of all the Judeans who were sitting in the court of the guard. 13 In their presence I charged Baruch, saying, 14 Thus says the Lord of hosts, the God of Israel: Take these deeds, both this sealed deed of purchase and this open deed, and put them in an earthenware jar, in order that they may last for a long time. 15 For thus says the Lord of hosts, the God of Israel: Houses and fields and vineyards shall again be bought in this land.

Jeremiah goes through the multi-stage process – as much like a religious ritual as a legal procedure – designed to ensure that the property in Anathoth is legally transferred from Hanamel to himself, and that even in the distant future, it will be recognized beyond all doubt as his. Every ‘i’ is dotted and every ‘t’ crossed in his deed of purchase, and it is stored for posterity in the ancient equivalent of a safe.

Jeremiah knew the crucial importance of property deeds at times of political upheaval, when populations are displaced and family members die, properties are forcibly abandoned, oral histories interrupted, chains of transmission broken, and documents lost and destroyed. It is in precisely these circumstances that property owners are vulnerable to ruthless regimes and individuals bent on exploitation. 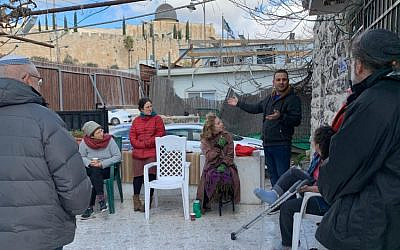 On 30th June 2020, after 30 years of cripplingly expensive and emotionally debilitating legal disputes, the Sumarin family will once again go to court to try to demonstrate their ownership of their East Jerusalem home. But unfortunately, their immediate ancestors were not prophets and God did not come to tell them to bury their deeds in an earthenware vessel in the garden. As would be the case for most of us in their situation, they are struggling with inadequate documentation to defend their claim in the face of their ideologically motivated, highly organized, and extremely well-financed opponents.

The consortium of Jewish organizations who are pressuring the Sumarins to leave situate themselves in another religious discourse involving redemption – the redemption of Jewish property from non-Jewish owners. But in their relentless pursuit of land, they fall foul of this week’s parsha – not to mention, as we’ll read in a couple of weeks, the book of Ruth – in which land redemption is for the protection of the weak and vulnerable, not a tool to be exploited for economic or political gain.

‘The land is mine’, says God. For the Jewish National Fund and their colleagues, it may sound like a rallying call, but it is not. The continuation of the verse is humbling – a reminder, a warning: ‘you are but strangers resident with me’.

The last time the Sumarins were threatened with eviction, a letter writing campaign organized by a coalition of Jerusalem activist organizations helped to stave off the eviction order. Another campaign will be launched on Jerusalem Day, 21st May. You’ll be able to find out more then at this link: Sha’alu Shalom Yerushalayim, Seek Peace Jerusalem — religious activists against evictions in East Jerusalem, or at their FB page.