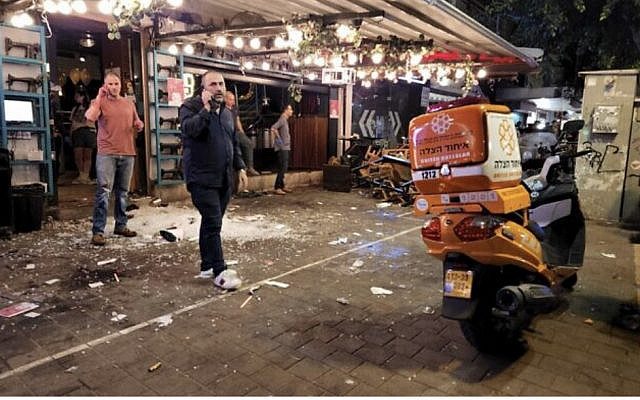 Israel is once again in mourning this week as two young Jewish men, aged 27, were murdered in cold blood in a terror attack on Tel Aviv’s Dizengoff Street. A third 35 year-old victim was announced this morning – a father of three and former Olympian. Israeli media headlines blared, “Instead of a wedding, a funeral” as one of the terror victims was recently engaged. Scores of others were seriously wounded in the shooting rampage, as condemnations from around the world poured in.

Italy said it was “appalled by yet another terror attack . . . we firmly stand by Israel and its people.” The Czech Republic stated: “We condemn in the strongest possible terms this act of blind hatred.” Germany announced: “We stand by your side,” reaffirming its “solidarity with the Jewish people”. Additional condemnations poured in from the United States, the European Union, Austria, and the United Kingdom.

But are these condemnations enough? Reports of candies being distributed in Ramallah over this terror attack showcase that incitement to terror is emanating from the Palestinian Authority itself. In the last three weeks, 14 Israelis have been murdered at the hands of Arab-Israelis and Palestinians. In recent weeks, AGPI has been calling on the European Union to suspend all aid programs to Gaza and the Palestinian Authority, until incitement against Israel and Jewish people ends.

We have called for an end to the Palestinian “pay for slay” program that awards Palestinian terrorists’ families with funding. More significantly, we have met with United Nations officials connected with UNRWA to curtail Palestinian curriculum that incites Antisemitism and terrorism. The continued flow of aid from countries such as Canada, the United States and those in the European Union without impunity or accountability must be suspended immediately, until change is evident on the ground and terrorism against Jews stops.

This week, we also stepped up our international advocacy effort to encourage the International Criminal Court to focus away from its false allegations against Israel and turn its attention and resources to investigating atrocities in Ukraine. Our leaders called for more action: AGPI’s Lawyers Cabinet Chairs, Leora Shemesh and Brahm Siegel, along with the organization’s National Board Members, the former Lt. Governor of Ontario, David Onley CM O. Ont. the The Hon. Stockwell Day, PC, ICD.D and Raheel Raza, President of Muslims Facing Tomorrow, along with the Hon. Jerry Grafstein all called for the ICC to put the Ukrainian situation on the fast track.

Meanwhile, we joined numerous international Jewish organizations in applauding the UN’s expulsion of Russia from the Human Rights Council. Still, as a human rights organization that is seeking fairness and truth toward Israel, we believe the HRC cannot cleanse its reputation so easily. It must also remove Israel from its permanent agenda that has led to bigoted and false accusations against the Jewish State. In truth, the Council should be expelling many countries (that happen to also be aligned with Russia) and are committing violent atrocities on a continuous basis. We condemn the vicious Russian attack today at a Ukrainian train station killing some 50 people.

This week, we were proud and privileged to provide a comprehensive workshop on Antisemitism and hate crime to over 100 leaders from the Canadian Association of Police Governance. We provided six comprehensive recommendations to counter and combat Antisemitism and hate. They included: first, more education to understand hate is not often in plain sight; second, evaluating the cost of free speech to victimized groups, while maintaining it; third, improving hate crime data collection and establishing an international framework to collect data. fourth, providing more resources to hate crime units and particularly to smaller police services; and finally, more sensitivity training.

At the same time, we note greater investment in Holocaust education by the Canadian government. This week, its 2022 Budget proposal included $20 million in 2022-23 to the Department of Canadian Heritage to support the construction of the new Holocaust Museum in Montreal among other investments to combat “both historical distortions and Holocaust denial”.

In the wake of this week’s violent attack in New York whereby three unidentified males approached Jewish victims and according to NYPD – “made anti-Jewish statements, and menaced the victims with a sword” – it is incumbent upon us all to fight Antisemitism relentlessly. We need to empower the police and authorities, but we also need to empower our communities to respond effectively. We continue to work diligently day and night to build a tent of allies that speak out and build consensus in the fight against evil at home and around the world.

About the Author
Avi Abraham Benlolo is the Founder and Chairman of The Abraham Global Peace Initiative (AGPI) He has been described as the nation's most prominent and noted expert in Holocaust studies, in countering Antisemitism and promoting human rights.
Comments