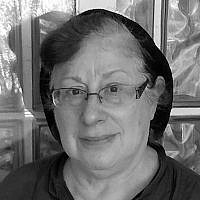 The Blogs
Frieda R. F. Horwitz
Apply for a Blog
Please note that the posts on The Blogs are contributed by third parties. The opinions, facts and any media content in them are presented solely by the authors, and neither The Times of Israel nor its partners assume any responsibility for them. Please contact us in case of abuse. In case of abuse,
Report this post.

On July 19 2021, headlines stated the protest of King Abdullah about Jewish visits and prayer on the temple Mount.

Once again, Israeli media has repeated the untrue assertion about the so-called status quo of the sanctity on the Temple Mount in Jerusalem, repeating the false assumption that prayer by individual or groups of Jews never occurred on the Temple Mount since 1967. This is simply not true; there has been Jewish prayer on the Mount and a changing status quo, especially since 2000.

The Supreme Court ruled and has repeatedly reiterated that Jewish groups and individuals indeed have the right to pray on the Mount, but subject to police determination of “public order needs”. The political tension between the Jordanian government and the Palestinian Authority over whose authority reigns the Mount, has been a major factor in the discussion over the so-called status-quo. Palestinian Moslem leaders have increasingly expanded the term  “AL Aksa Mosque” to include the entire Temple Mount and indeed, even the Western Wall and its adjoining plaza, during the last decade.

From 1967 until September 2000, Jews went up freely to the Temple Mount, with prayer books and prayed silently at will, with no police check and no Waqf employees following them. I know, because I was one of many visitors, who went unto the Mount, and I went several times. No police search for prayer books was done and absolutely no one checked to see if silent prayer was uttered.

Several groups of distinguished rabbis in groups of ten prayed together on a monthly basis. All that changed in response to the pre-meditated rioting that occurred after the September 2000 visit of Ariel Sharon onto the Temple Mount with a large retinue of armed police – even though that visit had been “cleared” with Jabril Rajoub. The rioting was used as the now acknowledged pretext for Arafat’s launch of the second intifada; those riots ended the Camp David negotiations between Pres Clinton, Yassir Arafat and Prime Minister Barak.

The Mount was then closed to Jewish visitors until 2003, when Tzachi Hanegbi re-opened the Mount with restricted hours and new rules about Jewish prayer. Zealous policemen were particularly diligent about those who were deemed religious by their dress, increasingly allowing Palestinian Waqf monitors to determine if Moslem sensibilities had been irritated.

Sharia law has never forbidden and currently does not forbid prayer by non-Moslems on the Temple Mount. Let us be very clear -the Palestinian Authority is working very hard to ensure that increasing numbers of Moslems believe there is no reason for a Jewish presence on the Mount, or indeed any legitimate attachment to the Western Wall and the adjoining Plaza. The illegal destruction under the Temple Mount twenty years ago  to make an enlarged prayer space, destroyed antiquities thousands of years old. But at least it should be crystal clear to Israeli media what are facts and what are untrue lies.

Since when did the entire Mount become holy to Moslem prayer, when it is a common picnic area for Arab families, whose sons play soccer freely there? Is that the sign of a holy site? Has anyone ever seen children playing at Mecca or Medina, or at the Cave of the Patriarchs, a shared holy site to Jews and Moslems? No and again No.  In December 2018, the Supreme Court ruled that the police must prevent Arabs from playing ball games on the Temple Mount and received a commitment on the matter from Chief Justice Michael Frankenburg, the legal advisor of the Jerusalem District Police.

The constantly changing situation has included Hamas-paid men and women whose job was to harass all Jewish visitors. Why was that fact allowed to continue until the recent Supreme Court decision to evict them from the Mount? Why was Palestinian false rhetoric allowed to be continuously asserted, like any Big Lie, that there was never any Temple on the Mount, and Jews have no reason to even visit there, let alone pray there? Or the false assertion of intentions to harm the Al Aksa Mosque which has zero religious value to the Jewish people.

A generation of Arab youth has grown up with this falsehood dunned into their eyes and ears – despite the fact that Waqf historian Aref al Aref already asserted in his 1929  publication, A Brief Guide to the Haram al-Sharif, that “the Mount’s identity with the site of Solomon’s Temple is beyond dispute.”

Palestinian false rhetoric has now regularly asserted, like any Big Lie, that there was no Temple on the Mount, and Jews have no reason to even visit there, let alone pray there.  Arafat first made this ridiculous lie at the Camp David meetings; this falsehood has now been enshrined in the recent UNESCO resolutions about zero Jewish connection to the Temple Mount.

The Palestinian Authority has vociferously fought with Jordan to not permit placement of cameras on the Mount – so that the PA can continue to incite Moslems with the patently false assertion of Israeli intentions to harm the Al Aksa Mosque.  A generation of Arab youth has grown up with this falsehood dunned into them, regularly incited by both Palestinian Sheikh Yusef Edais and Grand Mufti Sheikh Muhammed Hussein.

At the very least, Israeli media should clearly state the facts about past and present status-quo” on the Temple Mount, the heart of Jewish soul and belief in Israel and abroad, today and always.

About the Author
A native of Milaukee, WIsconsin, made aliya in 1983. BA from Barnard College, MA in Contemporary Jewish Studies from Brandeis and Phd studies in International Relations and Middle East Studies from Columbia University and Hebrew University. National Associate Director of Union of Councils for Soviet Jews in USA, Executive Director of Program for Innovative Teaching and Assistant Director of Moetzet Yachad. Created and directed the experimental Coalition Project in Kiryat Menachem Jerusalem.
Comments