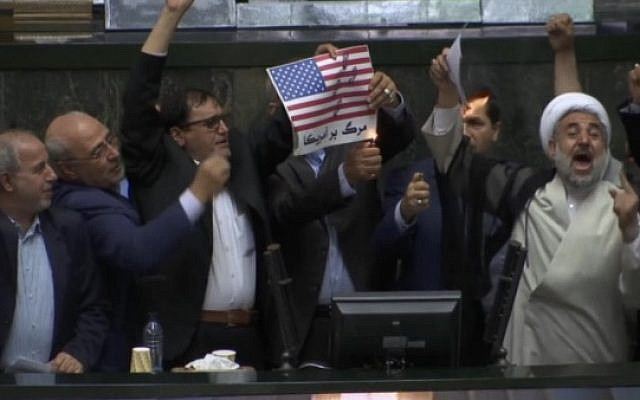 Iranian politicians burning US flag (picture from Times of Israel)

After Mr. Biden took the office of presidency and his ill-informed policy toward the Middle East, and Iran in particular, it seems that the usual relations are set to resume through secret negotiations, which have shown for the past thirty years to be a waste of time; because the Islamic Republic of Iran is not bound by any of the international treaties.

In order to properly analyze and clarify public opinion, the world needs a careful review of why no executive guarantees have been provided in dealing with the Islamic Republic of Iran. While only during President Trump’s presidency, the USA has been able to deal seriously with this terrorist regime in Iran. It exemplified by the Twelve Conditions, in addition to the extended economic sanctions, which is still standing, has caused the Islamic Republic to cut its hand from interfering in other countries to a large extent, as well as the removal of Qassem Soleimani, the Islamic Revolutionary Guard Corps (IRGC) terrorist commander.

Now if we assume; the IRGC, Khamenei, and his terrorist regime, for sake of argument, have accepted the 12 terms of the White House and the various terms of France and Germany, and the government of Mr. Biden and its European partners lift the sanctions, again, it is not clear which party can secure a guarantee. If we assume a multilateral agreement by Mr. Biden’s partners and the Islamic Republic of Iran and obtain the so-called legal document, unlike the jcpoa iran nuclear deal, but its validity will be questionable for the people of Iran, the region, and Israel.

Is it really possible for a regime that for more than 30 years has spent all of the country’s economic, military, and human resources solely on terrorism and the production of nuclear weapons, and violated its adherence to the global protocol of non-proliferation, to voluntarily allow inspection its sites? All these under an agreement that the same regime did not consider to it be no more more than a piece of paper?

What do you say about The Joint Comprehensive Plan of Action (JCPOA)  experience? The agreement, known as the P5 + 1, which had global backing and Resolution 2231, was ridiculed by the Khamenei-led Islamic Republic in the region, and only President Donald Trump realized the plan and gave a decisive response to the perpetrators of of JCPOA.

The question is; Why is the guarantee of any agreement, treaty, etc., even with the support of the UN Security Council, not enforceable and has no executive-practical guarantee, when dealing with the Islamic Republic of Iran?

During these four decades, the Islamic Republic of Iran has violated all treaties and international agreements and does not recognize them. Looking back the past 42 years, it becomes clear to the people of the world why this malignant cancer can not be cured by negotiation and contract and with no executive guarantee, but is like artificial respiration given to a brain dead patient and only causes suffering and It hurts others.

The ruling terrorists in Iran, after the Islamic Revolution, showed their true colours through the hostage-taking and occupation of the US embassy in Tehran, and the same occupiers of the embassy took key state and military positions. They still travel freely to other Western countries, and even their families are based in the United States and Europe, and there are no obstacles in front of them.

The Islamic Republic of Iran, as a member of the United Nations; eventhough agreed to have respect for the human rights and citizenship constantly violates these agreements. It is no secret that this regime has gone further and massacred Iranian citizens in large numbers, executed teenagers under the age of 18, and flogged girls and women in the city squares as barbarians under the sharia law.

The Islamic Republicof Iran is the only country in the world that explicitly exports state terrorism to the world. The criminal sect brutally kidnaps and kills its opponents in other countries. After the mass assassination of their opponents in the 1980s, European countries recalled their ambassadors from Iran, and three countries, Germany, France and Britain, with the help of the then US government, signed an agreement with the then government of the Islamic Republic of Iran to stop the export of terrorists, but still the rgime in Iran trampled on it.

In addition to violating the treaty again, the Islamic Republic of Iran continued to work in new ways, and this time by establishing religious institutions and building mosques, the regime sent their thugs under the cover of Islamic scholars, journalists, and intelligence forces to various Western countries.

In addition, they lobbied extensively in Europe, the United States, and other countries so that these lobbyists could cleverly cover up the inhuman and barbaric acts of this regime.

Infamous lobbyists blame US pressure for the bad behaviour of the Islamic Republic of Iran. These lobbyists usually hold key positions in the West and often put themselves behind the economic interests of these countries as well as the Islamic regime, which is why some multinational corporations and politicians in many of these countries support them for short-term interests.

The main task of the lobbyists of Velayat-e-Faqih in playing the most important role is; whenever the issue of the Islamic regime and the Middle East is on the news; they have appeared in most Western state and private news agencies as experts or analysts with fake statistics, claim that the majority of the Iranian population supports this criminal regime and defend the Islamic Republic of Iran.

As for the issue of Nuclear and JCPOA, it is not a secret that the Islamic Republic of Iran continues its enrichment work in secret and is a serious threat to the entire Middle East by constantly launching missiles at neighboring countries and causing unrest by its proxy forces.

Now with such a regime, Does guarantee any agreement, treaty, etc., even with the support of the UN Security Council mean anything? Is it possible for the Islamic regime of Iran to commit to an international treaty by countries that are thousands of miles away from Tehran except Russia? The truth is that the Islamic Republic of Iran knows that such a guarantee to limit Iran’s access to nuclear weapons is a joke in the service of deceiving the naive world.

The only straightforward guarantee, without deception, is the permanent establishment of the representatives of the Nuclear Energy Organization and their inspectors in Iran, and military and security measures to protect these permanent inspectors in Iran, will largely guarantee controling the regime in Iran. What the Islamic regime of Iran is trying to impose on the West is to sell insecurity through binding global negotiations and treaties.

The West must report sooner or later on curbing the destructive activities of the Islamic regime in Iran for the world’s public opinion. What assurances and guarantees will the West then unveil? This is the same important principle that the rulers of the Islamic Republic of Iran have ridiculed the world for years by wasting time.

All the evidence shows that as long as this criminal regime is in power and occupies Iran, there will be no behavioural changes. Lying, marginalization, kidnapping, embezzlement and looting and breach of international agreements are the hallmarks of this regime.

To name diplomacy and contract without executive guarantee and unilaterally with a system that violates the basic human right, it is meaningless. Continuation of this repetitive and fruitless process puts the people of this country in front of the choice of either war or disintegration, due to the continuation of an incompetent regime that thinks only of its own interests and does not value the existence of Iran and its people. This barbaric regime will do anything for its existance, be it mass murder, or disintegration of the country, and even push for an all out war in the region.