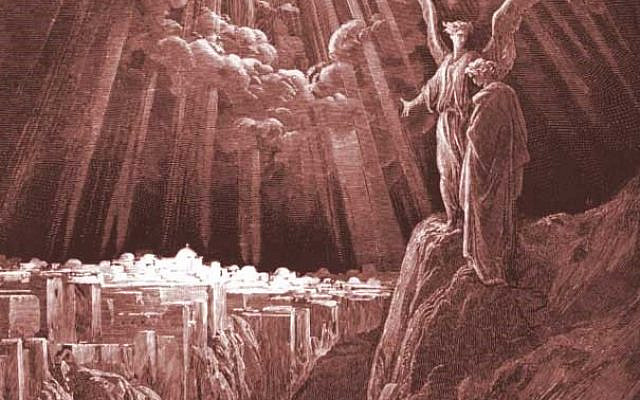 Here the celestial city is being shown by a guide to a mystic who has reached the place where the greater sages, saints and others worthy reside. The Messiah has direct access to this Holy Capital even though he or she is still in the body. Above, the Light of the Highest World shines down. This is the domain of the Great Holy Council that is those who have attained full Self-realisation. (Dore’s Bible illustrations, 19th century). Source: Z’ev ben Shimon Halevi, A Kabbalistic Universe, Kabbalah Society, 2007, p. 235

When, with blossoming Souls, we establish ourselves on the New Earth, we will be able to contemplate the New Heaven, which is the reality of the Heavenly Jerusalem at Tiferet of the World of Creation.

On the “sky” above the New Earth as a Garden of Paradise, is the New Heaven, the Light of     G-d, the cosmic-spiritual Sun, which never sets! In it we could see the images of all our beloved Masters and Manifestations of the Divine Feminine in their celestial transfigured bodies shining in great glory, love and power.  Their radiation will contain all colours of the Divine Rainbow and will reveal the beauty of this Divine World – the result of their common inspired co-creative work with God.

A mystical key to the Reality of the New Heaven we could find in the same legendary Buddhist Surangama Sutra (quoted in the previous Post). Expecting the coming of the Enlightened One, Maitreya-Buddha, Tomo Geshe Rimpoché quoted an amazing vision which reveals the mystery of Creation from the Buddhist point of view:

Now, in the light of the new Creative Act from the G-d, we could imagine the One Who sits on the Throne, the cosmic-spiritual Sun of the Universe, radiating with His transcendental glory. From the twelve mythological directions, the Divine Masters of humankind – Krishna, Hermes, Moses, Zoroaster, Buddha, Lao Tze, Jesus Christ, Muhammad, the Master Beinsa Douno and others – shine with great Divine light that merges with the crown of the One Who sits on the Throne.

The Divine Masters, together with their Feminine Counterparts, are surrounded by the souls of many enlightened followers – the Prophets in Judaism, the Bodhisattvas in Buddhism, the Gurus in Hinduism, the Saints in Christianity, the Gnostics in Islam.  The Light emanating from the Divine Masters opens widely the gates of the Heavenly Jerusalem for initiation into the ultimate Reality.

So, the New Heaven is the integral light of all Divine Masters, Personifications of the Divine Feminine and all initiates, connected with them, who radiate from the “One, Who sits on the Throne” as from a colossal cosmic-spiritual Sun, enlightening the reality of the Heavenly Jerusalem.  In a similar way as the Sun is at the base of all life on Earth, thus the Light, Love, Wisdom and Truth of this cosmic-spiritual Sun is at the base of the co-creative life of the enlightened humankind.

The Fourth Heavenly Hall, composed of the Beriatic Hod-Tiferet-Nezah, is called Zebul, meaning Habitation. It is said to be the place of the Heavenly Jerusalem. Here Akiba says that he was with God. Being in contact with the Beriatic Tiferet would place him directly under the Azilutic Malkhut which is occupied by the Shekhinah, the Presence of the Lord. As the Tiferet of Creation, this place is watched over by the Archangel Michael who is the guardian of the House of Israel…When Rabbi Akiva attained this level of being he came into the presence of the nearest God-Name to natural man: ADONAI – LORD. This is where the human and Divine Worlds meet. (Z’ev ben Shimon Halevi, The Way of Kabbalah, Revised Edition, Kabbalah Society, London, 2007, p. 224)

If we imagine the New Heaven, the New Earth and the New humankind emanating from “the One who sits on the Throne and makes all things new“, then in sacred feelings, appreciation and trembling we could contemplate the Divine Tree of Life revealing the majestic Truth about God, Creation and the essence of the Human Being.  The roots of this tree will be in the Highest Divine World, the Absolute Origin of Being, the trunk will go through the whole vertical structure of Creation, and the crown will blossom in the earthly physical world testifying to the Divinity of everything which has been created!

Of course, the Tree of Life with roots on Earth and crown in the Highest Divine World and the Tree of Life with roots in the Highest Divine World and crown on Earth are only two different “points of view ” (earthly and celestial) of the great Tree of Life – revealing the absolute truth about God, Creation and the Human Being.  The essence is one and the same – it is the Lord God Almighty Who was, Who is and Who is to come!  The ultimate experience of this great Divine Truth is the Testament of Truth and the entry into the reality of the Heavenly Jerusalem!