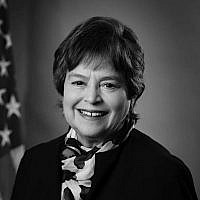 The Blogs
Nancy K. Kaufman
Nonprofit leader and social justice advocate
Apply for a Blog
Advertisement
Please note that the posts on The Blogs are contributed by third parties. The opinions, facts and any media content in them are presented solely by the authors, and neither The Times of Israel nor its partners assume any responsibility for them. Please contact us in case of abuse. In case of abuse,
Report this post.

I’ve just returned from what was my 45th trip to Israel. My first trip to Israel was in 1967, just three weeks after the six-day war. That summer at home was filled with racial unrest and protests against the Vietnam War. In contrast, Israel seemed to me to be everything the US wasn’t: it was unified, energetic, and nationalistic. It was optimistic about its future. It was something this BBYO-er was elated to experience first-hand.

It took me twenty-four years to return to Israel because “life intervened.” No longer the idealistic 16-year old I was on that first trip, Israel presented itself to me as an adult – mostly inspiring, sometimes challenging, but always with a sense of that intrigue and excitement that I first experienced in 1967. Most of my trips since then have been as a Jewish communal professional. As the head of Boston’s JCRC, I visited Israel on “solidarity missions” with the federation, led trips with non-Jewish political, religious, and NGO leaders or as part of the Boston-Haifa Connection.

When I became CEO of the National Council of Jewish Women seven years ago, I had the opportunity to experience Israel through a gender lens. This unique perspective has given me the opportunity to take my American feminism and compare it to feminism in Israel. While the women’s “movement” in Israel is much younger than the one in the United States it is nonetheless vibrant and growing. I truly believe that it will be women who break through the glass ceiling created by the male patriarchy that has prevented peace, provided little security and no equality for women and minorities living in Israel.

The study tour I recently returned from was like no other experience I have had in Israel. NCJW, the Jewish Women’s Funding Network and the Dafna Fund of Israel sponsored the trip with sixty American women (and two Aussies). The trip, “Force for Change: Israel Through a Gender Lens,” was designed to introduce American women to the smartest, savviest feminists not only in Israel, but anywhere in the world. After all, Israel’s founders wrote into its Declaration of Independence that: “It will ensure complete equality of social and political rights to all its inhabitants irrespective of religion, race or sex.”

Who are these extraordinary women leaders that we met with and how can they be a force for change? They are local activists like Laura Wharton and Tehila Friedman-Nachalon; women demanding pluralism and equal treatment in religious practice like Anat Hoffman and Tamar Elad-Applebaum; and former and current Members of Knesset like Naomi Chazan and Aida Touma-Sulieman, Penina Tamanu-Shata and Merav Michaeli. They are Palestinian feminist activists within the green line like Samech Salaime, director of Arab Women in the Center, Fida Nara Abu-Dabai from Mahapach Tahgir, and Rafah Anabtawi, director of Kayan Feminist organization, and Riman Barakat. They are Palestinian entrepreneurs beyond the green line like Abeer Al Natsheh and Ghada Au Taha. They are legal advocates like Susan Weiss, director of the Center for Women’s Justice and Galit Shaul, CEO of the Rachman Center and Estee Rieder-Indursky from the Haredi community. They are NGO leaders like Rafah Anatawbi, and Dana Myrtenbaum, head of ITACH–Ma’aki. I cannot name them all here, but these are the women leading and being the change that Israel so desperately needs to live up to the principles set out in 1948.

The journey culminated in a symposium on the state of feminism and women’s activism in Israel. Two-hundred and fifty Israeli feminists gathered in Tel Aviv to hear the results of a year-long participatory action research project co-sponsored by NCJW and the Dafna Fund and conducted by Dr. Nancy Strichman. “Past Achievements and Future Directions of Women’s and Feminist Organizations in Israel” is a detailed report that methodically outlines the story of women’s and feminist organizations in Israel. It is a comprehensive look at topics from economic independence to political representation; from personal status and rights in religion and law to artistic expression and prevention of gender-based violence; from women’s roles in advancing peace and security to their role in leading community social movements.

Ending our experience on the tour in a room full of even more women dedicated to making change was extraordinary. Listening to small group conversations among American, Israeli Jewish and Palestinian women moved me. They probed the similarities and differences between our countries, our leaders and our civil societies. These conversations explored our hopes and fears in promoting democracy and equality for women with peace and security for all.

At the end of the day–International Women’s Day – we tied a red string around each other’s wrists in a symbolic move to remind us that there is much more that unites us than divides us. There was not a person in the room who did not feel the power of coming together across our cultural divides. No one should underestimate the power of organizing women to change the world and we all left the room committed to doing just that.

About the Author
Nancy Kaufman is the board chair of the New York Jewish Agenda (NYJA), a nonprofit organization that amplifies the voices of the pluralistic and diverse Jewish community of New York. Inspired by Jewish and democratic values, NYJA strives for social justice in the US and Israel, and is committed to combating antisemitism and other forms of bigotry and hate. She is the former chief executive officer of the National Council of Jewish Women (NCJW).
Related Topics
Related Posts
Nancy K. Kaufman
Comments