The United Nations Organization isn’t what it meant to be.

This week he was a guest of Beth Jacob Synagogue, in Beverly Hills California, that is holding an ongoing speakers series for the community.

Mr. Neuer spoke to a large audience all curious to know why Israel, the most bashed country in the UN, remains a member. 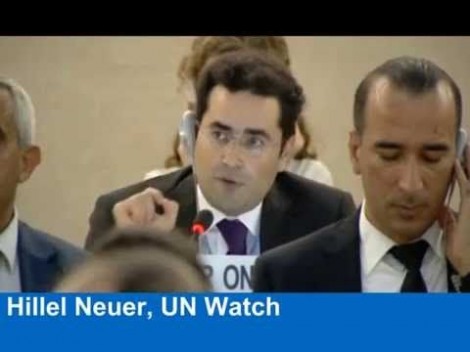 Hillel Neuer at the UN

From its anti-Israel activities it certainly appears that the UN Human Rights Council will be a redundant body if not for Israel. It relentlessly works to find ways to pass resolutions that demonize and delegitimize Israel, all based on lies and detestation.

Though the UN was founded to be an independent and impartial body it is not. The fact is that whenever Israel has to go to war to defend herself, which she has been doing since it became a sovereign state, the UN Security Council sees fit to open an inquire on Israel’s conduct, never establishing a body to investigate the aggressor, such as Hamas, conduct. The first proof is the UN Human Rights Council (UNHRC) commission, headed by Judge Richard Goldstone that was assigned to investigate Israel’s Operation Cast Lead and the actions of the Hamas terrorist group. The outcome, j’accuse Israel. Now, again, the UNHRC has established a new inquiry commission to investigate Israel’s action in Gaza during Operation Protective Edge. The head of this commission is Professor William Schabas who is well known to have bias opinion of Israel. One needs to ask, where is the UN fairness, impartiality and honesty? It has none!

Here are some of Mr. Neuer’s worthwhile remembering citations:

To those who are angry that over 50% of the UN Human Rights Council resolutions condemn Israel he says: “The UN reflects the way the world is.” “In an assembly of darkness [UN] we need to light a candle of truth.”

“Today Israel is the Jew among the nations; stand up and fight back the unfair treatment Israel constantly receives at the UN.”

Ron Prosor, Israel Ambassador to the UN is a beacon of light in this dark and evil organization. Here are two of his recent appearances in which he tried to teach a moment of truth to Israel bashes and foes at the UN: 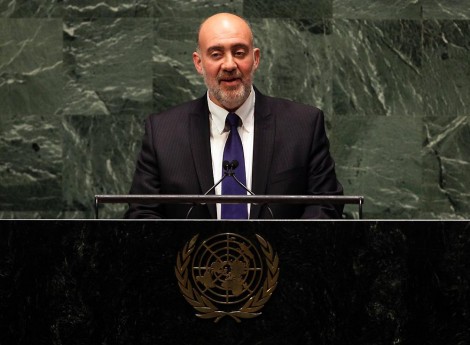 “The state of Israel is the land of our Forefather, Abraham, Isaac and Jacob. It is the land to where Moses led his people; where King David built his palace and where King Solomon built the Jewish Temple and where the Prophet Isiah saw a vision or eternal peace. For thousands of years Jews continuously lived in the land of Israel; we have witnessed the rise and fall of the Assyrians, the Babylonians, the Greek and Roman empires and we have endured thousands of years of persecutions, expulsions and Crusades. The bond between the Jewish people and the Jewish land is unbreakable. Nothing can change one simple truth, Israel is our home, and Jerusalem is our eternal capital. …

“You, the international community are lending a hand to extremists and fanatics; you, who preach tolerance and religious freedom should be ashamed. Israel will never let it happen. We will make sure that the holy places remain open to all people of all faiths for all time….

“Amidst all nations of the world there is one small state, the nation state for the Jewish people. And for some people this is one too many. As I stand before you today I am reminded of all the years when the Jewish people paid in blood for the world’s ignorance and indifference. Those days are no more. We will never apologize for being a free and independent people in our sovereign state, and we will never apologize for defending ourselves. To the nations that continue to allow prejudice to prevail over truth, I say j’accuse!

“In the face of these offenses the verdict is clear: You are not for peace and you are not for the Palestinian people; you are simply against Israel. Members of the International community have a choice to make: You can recognize Israel as the nation state of the Jewish people or permit the Palestinians leadership to deny our history without consequence. You can publically proclaim that the so called claim of return is a nonstarter, or you can allow this claim to remain the major obstacle to any peace agreement. You can work to end Palestinians’ incitement or standby as hatred and extremism takes roots for generations to come. You can prematurely recognize a Palestinian state, or you can encourage the Palestinian Authority to break its pact with Hamas and return to direct negotiations; the choice is yours. Steer the Palestinians off course or pave the way to a real and lasting peace.“

“Israel will never be silent. We will stand guard and we will safeguard Jerusalem, not just for the Jewish people, but for people of all faiths. And so today I issue this promise, from the people from the promise land, that under our watch Jerusalem, the eternal capital of the Jewish people, will remain a free and open city for all people and for all time.”
It appears that Mr. Prosor talks to the wall as the hostility toward Israel is only getting worse in the UN, in Europe, and mostly among the Arabs calling themselves “Palestinians.”

Originally the UN was friendly towards Israel. After all it has passed the resolution to declare Israel a sovereign state and later on accepted Israel as a member.

Sadly, over time’ the UN has changed. Many dictatorships have joined its ranks. The Arab states have failed to defeat Israel on the battlefield so they found a political avenue, through the UN corridors, where they and their cohorts have an automatic majority. The organization has become a major enabler of terrorism against Israel and more recently against other non-Moslem people around the world. It does not follow the moral authority it seeks and thus has become an amoral organization built upon generations of deceit, lies and corruption.
UN attacks on Israel have gone so far that it has passed a resolution equating Zionism with racism, all in order to demonize and delegitimize Israel. The resolution was later on repealed but Zionism equated racism remained to resonate worldwide. Words matter, words can kill.

The UN is well known for its Israeli bias and favoritism of the Arab members, all hostile to Israel. To that end each year, on November 29th, the day the UN voted to partition the land into a Jewish state and an Arab state, to which the Jews said “yes” and the Arabs said “no,” the organization holds a ‘UN Day for Palestine’ only for the purpose of singling out Israel. No other country has such a day at the UN because no other country has a conflict with the Jewish state, Israel that can become a reason to attack Israel.

The UN supposed to offers equal treatment of large and small nations and organizations but Israel is excluded.

One must know that every resolution passed at the UN is translated into six different languages and is distributed wide among nations, diplomats, NGOs and influential organizations and millions of people read and remember its context. Words matter and they have influence, what is said in the UN matters.

So no matter how much Israel is bashed, no matter how much the UN conspires to delegitimize and demonize Israel, the Jewish state must hold the candle of truth until things change in the United Nothing Organization; until countries become more democratic, opposed the dictatorships and malevolent governments that today make up the majority membership at the UN, all act according to real politic, better yet, surreal politics, each in its own interest – or because that country or another is simply anti-Semitic – and thus end up voting against little Israel.

Hillel Neuer and Ambassador Ron Prosor are remarkable men; each, on his own, is the Judah the Maccabee of Israel representing the Jewish state in the halls of the Hellenistic United (Nothing) Nations Organization as a whole and Human Rights Council in Geneva, Switzerland in particular.

The defenders of Israel will never slumber.