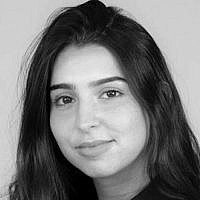 The Blogs
Keren Shaharabani
Apply for a Blog
Please note that the posts on The Blogs are contributed by third parties. The opinions, facts and any media content in them are presented solely by the authors, and neither The Times of Israel nor its partners assume any responsibility for them. Please contact us in case of abuse. In case of abuse,
Report this post.

“The university campus scene has become a horror movie for Jewish students in North America, who are being harassed verbally and physically on a daily basis,” explained Dan Diker, former Secretary General of the World Jewish Congress, who currently works as Director of the Political Warfare Project at the Jerusalem Center for Public Affairs.

Eviction notices are put on Jewish students’ doors due to their religion, even if they have no connection with Israel. American activists campaigning for “Justice” or “Peace” in Palestine are actually, de facto, devoted to the destruction of the Jewish State. The Palestinian Authority and the Palestinian Liberation Organization have done little to promote the economic, health, and educational wellbeing for the Palestinians. Yet, Boycott, Divestment and Sanctions (BDS) activists turn a blind eye to these injustices without even noticing.

In 2016, the International Holocaust Remembrance Alliance (IHRA) working definition of “Modern” antisemitism was accepted by an IHRA plenary of 31 countries. As of December 2019, 17 countries have formally adopted the IHRA definition, as well as the US State Department. As an Israeli student who advocates for Israel, I am concerned. Unfortunately, my peers do not realize the magnitude of the problem Jews in the diaspora are facing, and this has to change. It seems to me that Israelis, who are used to the reality of living as a Jewish majority in the Jewish state, have other troubles to worry about. In a sense, they do have a point. However, it is seldom discussed that many young Israelis simply don’t seem to comprehend the vulnerability of Israel’s existence.

The Committee for Accuracy in Middle East Reporting and Analysis (CAMERA) is proud to invite Mr. Diker to speak to students at an upcoming event at the Interdisciplinary Center Herzliya (IDC) on January 20th, in order to help raise awareness of this issue and ensure students understand how to combat it.

Mr. Diker, a highly respected foreign affairs analyst and Middle East expert, assesses that, “Ironically, some international BDS activists and Israeli critics of government policy share the mistaken notion that BDS is not antisemitic, but merely criticism of government policy in the disputed West Bank”. I, personally, find it sad that the only probable thing BDS activists and Israeli students have in common is this inaccurate assumption.

Since the BDS campaign was formally created in 2005, the founding ideology of the BNC (BDS National Committee) has been to delegitimize and demonize Israel as the nation state of the Jewish people, and to deny the fact that the Jewish people are indigenous to their land. Empirical evidence compiled by AMCHA Initiative, an organization devoted to fighting antisemitism on campuses, corroborates this statement. It found that there is a direct correlation between BDS activity in numerous North American campuses and the high rate of antisemitic incidents perpetrated by students and faculty on these campuses. “BDS is only a candy-wrapper in order to wrap a fundamentally wrong statement- that Israel is an apartheid and colonialist state,” Mr. Diker explained. Let’s be honest- who doesn’t like candy?

It might be surprising that BDS’s most significant and successful candy salesmen are 200 Israeli and Jewish academics who opposed the recent German Parliament decision (thereby taking the same position as Hamas, a designated terror organization) which defined BDS as an antisemitic movement. According to Mr. Diker, the only reason for their opposition stems from narrow political issues. “They absolutely disconnect it from the concept of antisemitism and promote BDS in order to voice their disapproval of Israeli government right-wing activity in the settlements.” Mr. Diker argues that these activists undermine, and often don’t even consider, that BDS denies the Zionist enterprise- Israel’s very right to exist.

“We need to defend Israel not only physically, but also ideologically and rhetorically”. As such, it is incumbent on us to distinguish between antisemitism and legitimate political discourse. In order to do so, Israelis need to know the facts and narratives.

Are you tired of BDS selling poisoned candies to the world? Attend our event, hear what Mr. Diker has to say, and learn more about what you can do about the BDS phenomenon. Hopefully, this horror movie will have a happy ending.

About the Author
Keren is a 24 year old student of Law and MBA in IDC Herzliya. She is Israel Fellowship campus coordinator at StandWithUs and a CAMERA on Campus Fellow at the IDC.
Related Topics
Related Posts
Comments