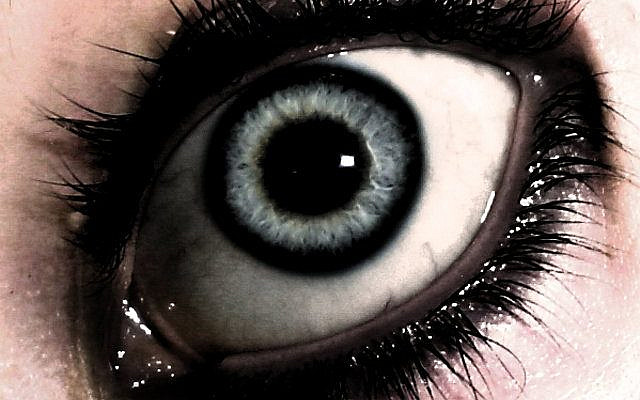 The Children of Israel are about to enter the Promised Land and the inhabitants of the surrounding territories are terrified. They’ve heard about the miraculous Exodus and Hashem’s guidance of our people through the perilous wilderness, and they realize that Israel is a spiritual force with which to be reckoned. King Balak decides that he must fight fire with fire and turns to the sorcerer Bilam to summon the forces of the dark side.

But, no matter how hard Bilam tried to curse the Children of Israel, all that would issue forth from his mouth was blessing. His blessings were so powerful that one of them would become the iconic prayer that we recite upon entering shul each morning, “How goodly are your tents Yaakov, your dwelling places, Israel!”

Prior to offering his iconic blessing, Bilam declares,[2] “The word of a man with an open eye…who sees God’s vision lying down with open eyes.” And throughout his pronouncements, Bilam makes constant reference to his eyes. While Bilam’s words heaped praise upon our forefathers, it is clear that his eyes had other intentions. What do our Sages mean when they contrast Avraham’s good eye with Bilam’s evil one?

Rav Yosef queried: A groom is exempt from reciting Shema on the first night of his marriage until Saturday night, if he has not yet completed his activity. And is one exempt due to preoccupation? If that is so, would one whose ship sunk at sea also be exempt? And if you would say: In fact, that is so, didn’t Rabbi Abba bar Zavda quote Rav: A mourner is obligated in all the mitzvos in the Torah except for the mitzvah to don tefillin, as they are called “splendor” [pe’er].

Mishna Berura: Tefillin are called splendor in the verse and a mourner is wallowing in ashes [epher]. And it is not nice to place splendor [pe’er] in place of ashes [epher].

Many of our mourning rites are derived from the instructions that Hashem gives to the prophet Yechezkel when he is in mourning. The Beis Hamikdash was about to be destroyed and his personal situation would serve as a symbol of the impending doom. In order to demonstrate to the Jewish people that they would soon be in such a chaotic state that they would be unable to mourn, God informed Yechezkel that he should not engage in the regular shivah practices. From what Yechezkel was told not to do, we derive what we must do during shivah.

For example, God declares,[3] “Observe no mourning for the dead: Don your splendor and place your sandals on your feet,” which refers to wearing tefillin and shoes. And so, on the day of the funeral, a mourner does not put on tefillin.[4]  The Mishna Berura[5] suggests that the prohibition of wearing tefillin is not simply due to Yechezkel’s mitzvah to don them, but there’s also something about the word used for tefillin that implies that wearing them would be antithetical to the state of mourning. Pe’er and epher share the same three letters – pay, aleph, reish – and the two are therefore unable to co-exist. This association between ashes and tefillin is also recalled by many bridegrooms under the chuppah. While we are all familiar with the breaking of the glass in memory of our Holy Temple lying in ruins, there is also a custom to smear ashes on the head of the chatan in the spot where he places his tefillin.[6]

The underlying reason for connecting these two words is the way the universe was created. Pirkei Avos[7] teaches, “With ten declarations the world was created.” The Gemara explains that this refers to the nine times God declares, “Let there be xyz.” When God announces that there should be light, there is light. Add to that the original creation of heaven and earth in the very first verse and we have ten declarations. But how was the world with all its minutiae of creation fashioned out of those ten statements? God took all those Hebrew letters and subjected them to a process of permutation and combination in order to create every last detail of the universe.[8]

Consequently, Hebrew is qualitatively different from any other language. In English, if I point to an object growing from the ground and call it a “tree,” the word is arbitrary. But in Hebrew, the word “eitz” is not just a name, it is the very essence of the object. That’s why the same word is used for “wood” even once it is detached from the ground. The name consists of two letters: ayin + tzadi = tree/wood. When those two spiritual letters combine, they result in the creation of a tree.

Now, it’s clear why pe’er and epher are connected. If they share the same letters, they come from the same source. They’re the same word in different permutations. Or, to put it colloquially, they’re two sides of the same coin. The most extreme example of this ability for words to mutate are the two words oneg, meaning “pleasure,” and nega, meaning “affliction.” The Sefer Yetzirah[9] writes, “There is no higher good than oneg, and there is no lower bad than nega.”

How do you transform affliction into pleasure? Listen to the following extraordinary teaching about the purification of contaminated garments. The Torah[10] states, “The cohen shall look, after the affliction has been washed, and, behold, the affliction has not transformed how it looks [hanega lo hafach es ayino].” The Chidushei HaRim comments that the only thing holding back the purification of the nega – the affliction – is the transformation of its ayin. In the verse, the word refers to how the blemish “looks,” and it is the same as the Hebrew word for “eye.” Homiletically, however, all it takes is to move the “ayin” from the end of the word to the beginning. Suddenly, the word transforms from nega to oneg!

In other words, if we simply adjust our “ayin” – the way we look at things in this world – we can transform the worst of situations into moments of joy and renewal. That’s why we acknowledge the epher under the chuppah, whether that occurs with actual ashes or the symbolic breaking of the glass. We acknowledge that this moment of intense joy has an equal and opposing force of negative energy. Undoubtedly, the young couple will experience challenges in their life. But, with the right attitude and the commitment to their spiritual partnership, they will be able to face and transform even the greatest challenges.

That’s the meaning of Bilam’s evil eye and the fine line between his curses and blessings. Both emanate from the same source. Ordinarily, the wicked sorcerer knew the formula of how to manufacture those Hebrew letters to bring suffering into the world. But, on that particular occasion, he found himself powerless to draw down the negative energy from the words. All that came forth were the blessings found within the words.

When you realize that all afflictions, at their innermost core, consist of the same elements as the highest form of pleasure, they become endurable. Right now, you might not “see” the pleasure. But in the blink of an “eye”, Hashem can transform that pain into joy. Hope and faith notwithstanding, you cannot just take a backseat and wait for Hashem to miraculously turn things around. Even when the circumstances are bleak, you have the power to decide how you will “view” the conditions. It’s your choice whether to place your “ayin” at the head of the situation or at the tail. The smallest attitudinal decision can make all the difference as to how you cope.

It’s not always possible to transform a situation. Some circumstances are beyond our control to change. But your perspective and how you respond is always in your hands and in your eyes. May the “eyes” have it!

About the Author
Rabbi Dr. Daniel Friedman is the author of The Transformative Daf book series.
Related Topics
Related Posts