We’ve all watched them, ridiculous videos of an older brother getting bitten by “Charlie,” the evolution of dance, and the infamous “Don’t’ tase me ‘bro” video. They are shared, spread and go viral as millions watch them. Our family never thought we’d participate in anything viral, and while thousands is nowhere near millions, our experience has been pretty incredible.

In an effort to match the extravagant vacations of our past community in Beverly Hills on a Rabbi’s salary, to draw our family close, and inspired by www.exploredall50.com’s Alisa Abecasis, we committed to seeing all fifty states by the time our oldest daughter, Avigayil, graduated high school. With our decision to move to Israel this summer our plan had to advance. We had thirteen states to visit, from Oregon to Maine, and then the drive back to Florida in time for our Nefesh B’Nefesh flight. On the return to Florida we decided to visit Unclaimed Baggage, a store in Alabama that sells items left in lost luggage from airports all over the country.

In the search for hidden deals, my wife, Aliza, and our five children still with us on the trip (we’d dropped our oldest at camp HASC already) , Temimah, Gila, Naomi, Tova and Moshe, found seven pairs of Tfilin, ritual straps and boxes worn during prayer. In His Torah God wrote,

If you see another person’s animal, you shall not hide from it; you must return it to the owner. If the owner is not known to you, then you should bring the object into your house, where it shall remain until the owner inquires after it, and you will return it to him. So shall you do for … any lost article that you may find…” (Deuteronomy. 22:1-3)

There wasn’t really an option of leaving the Tfilin in Alabama, Aliza and I knew that we had to find the owners and return them. We bought all seven pairs with the hopes of finding the owners.

With Facebook and social networking as our aides, we took pictures of the Tfilin, posted them on Facebook with a request to share and spread, and within twelve hours the post had been shared over 1,500 times. Along with reuniting with old friends, hearing some incredible stories, we found six of the owners. After a tragic week, in which our people collectively sat in mourning over three kedoshim, the speed in which the owners were found speaks not only to the power of crowdsourcing, but to the importance of following God’s commands, the resilience of our people, and our nation’s ability to come together in good times and bad. Thousands participated in this mitzvah, and it is a tribute to them that the owners were found.

Most importantly, we still have one more pair that hasn’t been claimed. It is pictured here, and was once checked at Machon Hastam Chaim B’yad in Holon. Please contact us if you have a lead. 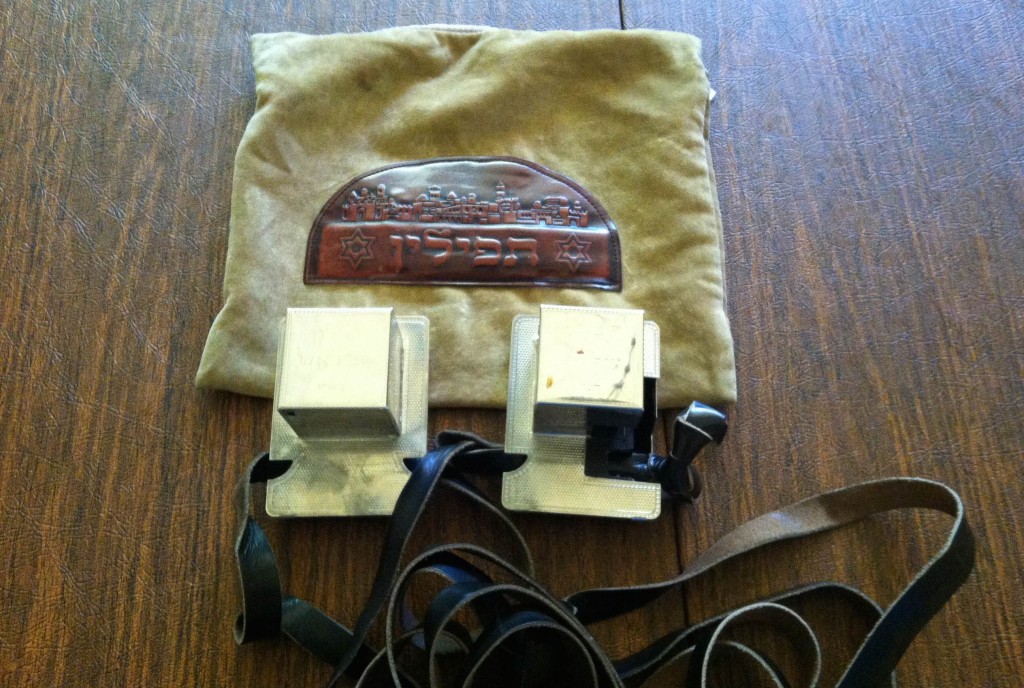 Last pair of t’filin, seeking owner (photo: Uri Pilichowski)
About the Author
Rabbi Uri Pilichowski is an educator. As a teacher, author and speaker, he teaches Torah and Politics, where he specifically emphasizes rational thought and conceptual analysis.
Comments