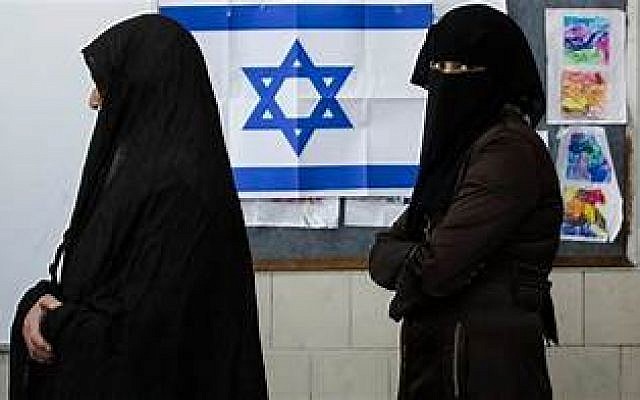 Waiting their turn at an Israeli polling station.

What is the halachic (Jewish Law’s) basis for a ban on pictures of women’s heads in some ultra-Orthodox minds? This must be the result of extreme piety that Haredi Jews must aim for. But is it?

Jewish women should, Jewish law dictates, not dance or sing in public. Except in front of women-only audiences or her own close family members (husband when they are not separated for the month and she didn’t return to the ritual bath yet, father, sons) and not show too much flesh or coiffure — if they’re married. But even the most pious of them don’t walk around veils — except as a bride (free crying, some privacy) and the “Taliban Mother” and other Haredi burka sect members, which is not the Haredi norm. But why not? If going the extra mile is pious, why not have very dedicated women cover their faces?

I learned why from my teacher Rabbi Zeev Leff, chief rabbi of Matisyahu.

Why do we insist on women covering enough leg and arm (and married ones enough head hair) but don’t expect them to go veiled? And why don’t we put pets in clothes if showing the body would be filthy nudity, unwanted provocation? (Except in places where animals wear clothing — there the people go around naked — he quipped. He first worked in Miami.)

First of all, know that Judaism doesn’t see sex as coarse. Sexuality is a beautiful thing. It’s even a holy encounter. The inner walls of the Holy of Holiest had pictures of unclothed couples “in intimate embrace” symbolizing the deep connection between the Jewish people and G^d.

So, sex should be reserved for special circumstances not because it’s dirty but because it’s holy. Don’t squander it. And to show that we’re not animals run by instincts but rather creatures who can say “no” or “later.”

Back to why Judaism teaches that women should cover up but not veil themselves. Many men cannot see the soul, personality in a woman when she’s showing off too much body. And like you don’t scream in front of a very sensitive person, it’s not bad for women to take others into account and have a modest way to dress. It builds good character.

Self-respecting women like to be recognized, love to be seen for who they are, not for their body parts. (Don’t blame women who succumbed to sexism and now think that their bodies are their best merchandise. We should not blame the victim.) To dress up so that men less can dress them down with their eyes and may see the person(ality) instead. Animals don’t need to be covered up. Their nudity doesn’t eclipse their soul.

Good for Muslims to abandon alcohol and good for Haredi Jews for banning pornographic body parts from ads. But here we’re not talking about body parts. We’re talking faces. If you’d want to ban women’s faces it seems that you want to see women only for their bodies.

Then there are Jews who think that all women should rule their homes but have no power in public because that would be unbecoming for the female soul. Guess what, Western society has moved on and this vision has been defeated forever. What these proponents could do is point out that total equality between the sexes is untrue and mere pretense and that we should honor the differences — but not by suppressing women.

They should learn the wisdom behind their daily blessing that G^d didn’t make us women; it’s to help us not be consumed by jealousy. Because when men face reality, how could we not be deeply jealous of them?

There are two more reasons why some people would avoid portraits.

Some people hang their house full of headshots of one or many rabbis because children behave when strangers are around. Their piousness might also inspire the onlooker. But some very pious Jews believe just the opposite, that it’s immodest to look at saints’ faces. When they paint biblical stories, you won’t see the facial details. They would not claim to be able to portray such holiness. Like in Islam — but don’t tell them.

Or maybe, anything female reminds some men of sex and they try to cover up an immodest oversexed brain by taking away women from the public sphere. They need medical attention but they won’t go. (Many aren’t oversexed but peer pressure makes them support this.) Anything female is sex is dirty. Like classical Christianity. But don’t tell them.

Israel needs a tongue-in-cheek civil law that allows men to ban women from the public eye only to Muslim and Christian men. That may teach self-styled pious Jews what they look like when they want that too.