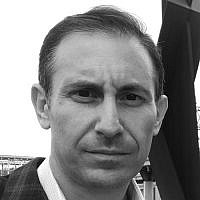 The Blogs
Todd Cohn
Apply for a Blog
Please note that the posts on The Blogs are contributed by third parties. The opinions, facts and any media content in them are presented solely by the authors, and neither The Times of Israel nor its partners assume any responsibility for them. Please contact us in case of abuse. In case of abuse,
Report this post.

56 members of Congress signed the Declaration of Independence. Pablo Picasso was a brilliant artist. The adult human body has 206 bones. Israel is the most beautiful country in the world. 6 million Jews perished in the Holocaust.

If one has a problem discerning the two opinions above from the three facts — and I believe that they do — we have a massive issue on our hands.

As a society, we don’t question whether World War II occurred. We don’t think the War of 1812 was imagined. We don’t debate the French Revolution as fiction. These events that occurred as history were memorialized in photos, books, films and through first-hand accounts. They are taught as part of curriculums in high schools, colleges and universities across the world. The Holocaust, although it has been memorialized in the same ways, is not being treated the same way.

This is happening across the country and specifically in my backyard. Schools in my county where I personally know teachers, students and administrators have teachers, students and administrators who deny the existence of the Holocaust. At Spanish River Community High School, former Principal William Latson said – in a crushing blow to Jews across the globe, “I can’t say the Holocaust is factual.” When someone in a position of power makes such a remark, the results are exponentially damaging and far-reaching.  It demonstrates a systemic problem not only in our school system but in society as a whole.

What can we do to change that?

We need to have a zero tolerance for anyone – whether they work in the school system or not (but especially if they do) that cannot freely and easily state that the Holocaust is a fact.  And through Southern NCSY, we will do this.  We are doing this. Not next week or next month, but today. Our Jewish Student Union runs clubs in 60 high schools throughout our region (including Spanish River Community High School) and that list continues to grow. We welcome any student into these clubs regardless of religion. With the generous support of a passionate group of visionaries, we have become a valuable Holocaust education resource for school districts in our region and beyond.

We have a plethora of unique and engaging educational resources that are being made available to any school who simply asks for them. Currently, we are bringing a virtual tour of Auschwitz and Birkenau – a look inside two of the most infamous Nazi death camps – to high school students. A virtual tour so comprehensive that they will feel as if they are touring in person. If we have to go school to school and door to door to make the availability of this program known, we will.

The great Jewish sage Hillel stated, “ If not now, when?”.  There’s a valid sense of urgency to take action right now. Now is the time for responses and plans, not words and empty promises. Whether you are Jewish or not, it’s time to stand up for history, for those who are discriminated against and for peace over hatred.

About the Author
Todd Cohn was born and raised in Overland Park, Kansas. He earned a degree in Advanced Hebrew Studies and began a career in the oil export business. By the time he was 25 he had started three businesses. Todd then decided to redirect his energies to inspiring the Jewish future with NCSY. Before ultimately settling in Boca Raton, Florida, Todd, his wife and 3 children spent eleven years in Kansas building this small community and its humble NCSY chapter into one of the most distinguished chapters in North America. Todd is currently the Executive Director of the 7 state area of Southern NCSY. This area services Jewish teens across Florida and the Southern US. In addition to being the Executive Director, he has also served as a Director for March of the Living, The Jerusalem Journey NCSY summer program for public school teens, was awarded the “Best of the Best” award from International NCSY, and was the Director of the Judaica Institute program of the Commission for Jewish Education, a beneficiary of the Jewish Federation of Palm Beach.
Related Topics
Related Posts
Comments