Around the same time that Amnesty International published their heinous report, a more important study was presented by HonestReporting.com, a non-profit that works “to ensure truth, integrity and fairness, and to combat ideological prejudice in journalism and the media” especially in what relates to the Jewish world and Israel.

The study looked into hate crimes tracked by the FBI, against various minorities, and compared it with media intelligence tracking software in order to establish a correlation, or lack of, between the number of hate crimes against each minority, and what had been reported by the media. The conclusion was that in a very disproportionate way, anti-Jewish hate crimes received substantially less coverage.

One does not have to go too far to see how the media on many occasions not only ignores acts of antisemitism, but even worse, blatantly pushes for a disconnection from the antisemitic character of an attack. Google “media ignores antisemitism” and you will have many references on the subject.

According to the various categories listed in the FBI Hate Crime Statistic database, these were the numbers for 2018-2020: 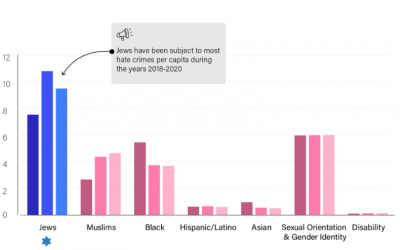 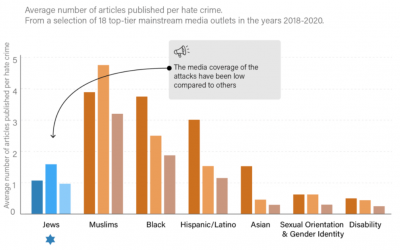 Ironically, one of the most common antisemitic canards, is that “Jews control the media”. Well, if that was the case, wouldn’t the correlation between media reporting and hate crimes more factual? After all, if Jews controlled the media, why would we minimize this reality?

I am wondering what a Jew-hater would say about this data.

The bottom line is that we while much is said about the media being the watchdog of the society, it is incumbent on us – “We, the People” – to be the media’s watchdog, now more than ever.