Since the mid-1950s, for several decades, Fairfax was a “Los Angeles Jewish neighborhood.” Although many Jewish-related institutions remain there, the 650,000 Jewish population (including an estimated 250,000 Israeli Americans) is spread throughout the area. Large concentrations live in the Westside (Pico-Robertson, Beverly Hills, Westwood, Brentwood, Santa Monica, Cheviot Hills, Beverlywood) and San Fernando Valley.

Today Fairfax is a mishmash of disjointed places, events, and buildings. The documentary included here visualizes many paradoxes and contradictions. The film starts at the heart of the area, where the legendary Carter’s deli still offers matzo ball with kreplach, cabbage borscht, chopped liver, stuffed cabbage, potato knish, smoked salmon plates, and the like. And just next door, the funky store Dolls Kill offers sales that generates a two-block long line.

Prestigious institutions, such as the Directors Guild of America and the Writers Guild of America West, share the street with the traditional Farmers Market and the adjacent The Grove Shopping Center. Also along Fairfax Avenue are CBS Television City, Little Ethiopia, Samy’s Camera photographers’ Mecca, and the whole is pepped with street artworks, some first-class, like Raoul Wallenger’s Memorial, and some temporary. 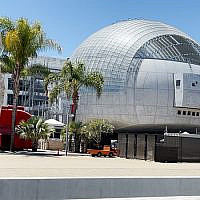 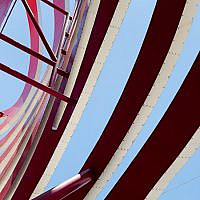 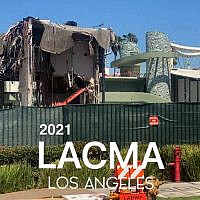 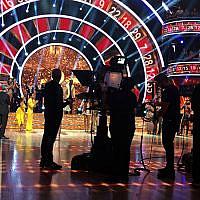 At a CBS performance 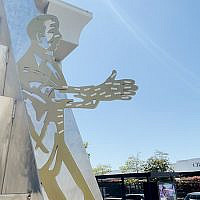 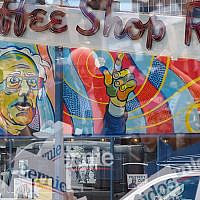 Around the intersection of Fairfax Avenue and Wilshire Boulevard, we encounter three architectural works that resemble a conference of monologues in different languages without translations.

The Petersen Automotive Museum is an adaptive reuse of a building designed by Welton Becket in 1962. In 2015, the architectural firm Kohn Pederson Fox wrapped it with stainless steel ribbons in an act of large-scale exhibitionism.

Pritzker Price-awarded Renzo Piano’s design of the Academy Museum of Motion Pictures soon to be inaugurated is more subtle. While maintaining the facade of the original May Company building, it reshaped its six floors from within. Inside there will be immersive permanent and temporary exhibition galleries, an education studio, two state-of-the-art theaters, and public unique event spaces. The sphere-shaped theater in concrete and steel will float above the ground floor level.

The original LACMA buildings were designed by William Pereira in 1965 and by Holzman Pfeiffer Hardy in 1986. Neither were gems of architecture. However, the decision to demolish them and substitute square footage with a new one designed by the Pritzker Price-awarded Peter Zumthor is an act of brutality and lack of imagination. The Amoeba-shaped plan, which reminds Oscar Niemeyer’s own house built in 1951, is far less organic when reviewing its poor use of space. At a tag of $750 million, it is an act of intellectual hubris.

The message to Israelis? Watch and learn.

About the Author
Rick / Reuven Meghiddo is an architect and a filmmaker of architecture documentaries. His mission is to make the public aware of the importance and value of architectural design. To date, he has produced over one-hundred architecture documentaries. Many can be seen in www.archidocu.com and www.architectureawareness.com As an architect, he practiced in Israel, California, and Italy. Born in Argentina, Rick studied at the Technion and married Ruth Meghiddo, also an architect, in Jerusalem. He has a Master of Architecture from UCLA and a Dottore in Architettura from the University of Rome. He is also a LEED Accredited Professional and is licensed as an Architect and as a Real Estate Broker in California.
Comments