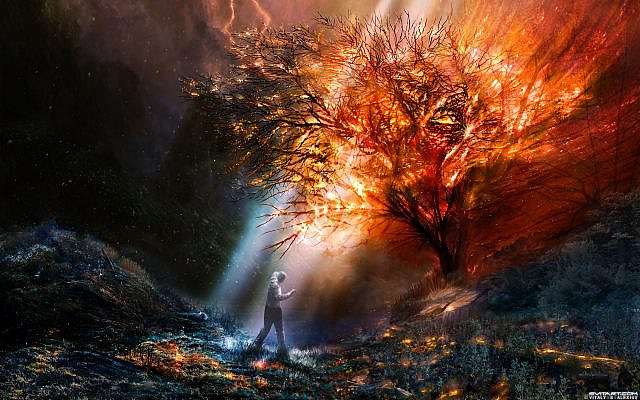 Some measure of the radicalism that is introduced into the world by the story of the Exodus can be seen in the sustained mistranslation of the three keywords with which God identified Himself to Moses at the Burning Bush.

At first, He described Himself as follows: “I am the God of your father, the God of Abraham, the God of Isaac and the God of Jacob.” But then, after Moses heard the mission he was to be sent on, he said to God, “Suppose I go to the Israelites and say to them, ‘The God of your fathers has sent me to you,’ and they ask me, ‘What is His name?’ Then what shall I tell them?” That was when God replied, cryptically, Ehyeh asher ehyeh (Ex. 3:14).

This was translated into Greek as ego eimi ho on, and into Latin as ego sum qui sum, meaning ‘I am who I am’, or ‘I am He who is’. The early and medieval Christian theologians all understood the phrase to be speaking about ontology, the metaphysical nature of God’s existence as the ground of all being. It meant that He was ‘Being-itself, timeless, immutable, incorporeal, understood as the subsisting act of all existing’. Augustine defines God as that which does not change and cannot change. Aquinas, continuing the same tradition, reads the Exodus formula as saying that God is ‘true being, that is, being that is eternal, immutable, simple, self-sufficient, and the cause and principal of every creature’.[1]

But this is the God of Aristotle and the philosophers, not the God of Abraham and the Prophets. Ehyeh asher ehyeh means none of these things. It means ‘I will be what, where, or how I will be’. The essential element of the phrase is the dimension omitted by all the early Christian translations, namely the future tense. God is defining Himself as the Lord of history who is about to intervene in an unprecedented way, to liberate a group of slaves from the mightiest empire of the ancient world and lead them on a journey towards liberty. Already in the eleventh century, reacting against the neo-Aristotelianism that he saw creeping into Judaism, Judah Halevi made the point that God introduces Himself at the beginning of the Ten Commandments not by saying, “I am the Lord your God who created heaven and earth,” but rather, “I am the Lord your God, who brought you out of Egypt, out of the land of slavery.”[2]

Far from being timeless and immutable, God in the Hebrew Bible is active, engaged, in constant dialogue with His people, calling, urging, warning, challenging and forgiving. When Malachi says in the name of God, ‘I the Lord do not change’ (Malachi 3:6), he is not speaking about His essence as pure being, the unmoved mover, but about His moral commitments. God keeps His promises even when His children break theirs. What does not change about God are the covenants He makes with Noah, Abraham and the Israelites at Sinai.

So remote is the God of pure being – the legacy of Plato and Aristotle – that the distance is bridged in Christianity by a figure that has no counterpart in Judaism, the son of God, one person who is both human and Divine. In Judaism we are all both human and Divine, dust of the earth yet breathing God’s breath and bearing God’s image. These are profoundly different theologies.

“I will be what I will be” means that I will enter history and transform it. God was telling Moses that there was no way he or anyone else could know in advance what God was about to do. He told him in general terms that He was about to rescue the Israelites from the hands of the Egyptians and bring them to a land flowing with milk and honey. But as for specifics, Moses and the people would know God not through His essence but through His acts. Therefore, the future tense is key here. They could not know Him until he acted.

He would be a God of surprises. He would do things never seen before, create signs and wonders that would be spoken about for thousands of years. They would set in motion wave after wave of repercussions. People would learn that slavery is not an inevitable condition, that might is not right, that empires are not impregnable, and that a tiny people like the Israelites could do great things if they attached their destiny to heaven. But none of this could be predicted in advance. God was saying to Moses and to the people, You will have to trust Me. The destination to which I am calling you is just beyond the visible horizon.

It is very hard to understand how revolutionary this was. Ancient religions were deeply conservative, designed to show that the existing social hierarchy was inevitable, part of the deep structure of reality, timeless and unchangeable. Just as there was a hierarchy in the heavens, and another within the animal kingdom, so there was a hierarchy in human society. That was order. Anything that challenged it represented chaos. Until Israel appeared on the scene, religion was a way of consecrating the status quo.

That is what the story of Israel would overturn. The greatest empire on earth was about to be overthrown. The most powerless of people – foreigners, slaves – were going to go free. This was not simply a blow to Egypt. Although it would take thousands of years, it was a deadly blow to the very concept of a hierarchical society, or of time as what Plato called it, “a moving image of eternity,” a series of passing shadows on a wall of reality that never changes.

Instead, history became an arena of change. Time became something understood as a narrative, a journey or a quest. All this is hinted at in those three words, “I will be what I will be.” I am the God of the future tense.

So Judaism, in the concept of a Messianic age, became the only civilisation whose golden age is in the future. And throughout the Torah, the promised land lies in the future. Abraham does not acquire it. Nor does Isaac. Nor does Jacob. Even Moses, who spends forty years leading the people there, does not get to enter it. It is always just beyond. Soon but not yet.

I think this is one of the most important ideas of Judaism. I wrote a book about it, called Future Tense.[3] I remember one evening when Elaine and I had the privilege of discussing this with the founder of positive psychology, Martin Seligman, in his home in Philadelphia. He was toying with a similar idea. After years of practising psychology he had come to the conclusion that the people with a positive psychology tended to be future-oriented, whereas those with a negative mindset – he called this, in a brilliant phrase, “learned helplessness” – were often fixated on the past.

A few years later, he and three other scholars published a book on the subject called Homo Prospectus.[4] What is it, he asked, that makes Homo sapiens different from other species? Answer, we have an unrivalled ability “to be guided by imagining alternatives stretching into the future – prospection.” We are the future-oriented animal.

I wish this were more deeply understood, because it is fundamental. I have long argued that a fallacy dominates the scientific study of humankind. Science searches for causes; a cause always precedes its effect; therefore science will always seek to explain a phenomenon in the present by reference to something that happened in the past – anything from the genome to early childhood experiences to brain chemistry to recent stimuli. It will follow that science will inevitably deny the existence of human freewill. The denial may be soft or hard, gentle or brutal, but it will come. Freedom will be seen as an illusion. The best we can hope for is Karl Marx’s definition of freedom as “consciousness of necessity.”

But this is a fallacy. Human action is always oriented to the future. I put the kettle on because I want a cup of coffee. I work hard because I want to pass the exam. I act to bring about a future that is not yet. Science cannot account for the future because something that hasn’t happened yet cannot be a cause. Therefore there will always be something about intentional human action that science cannot fully explain.

When God said, “I will be what I will be,” He was telling us something not only about God but about us when we are open to God and have faith in His faith in us.

We can be what we will be if we choose the right and the good. And if we fail and fall, we can change because God lifts us and gives us strength.

Whenever I visit Israel, I find myself awestruck by the way this ancient people in its history-saturated land is one of the most future-oriented nations on earth, constantly searching for new advances in medical, informational, and nano-technology. Israel writes its story in the future tense.

And the future is the sphere of human freedom, because I cannot change yesterday but I can change tomorrow by what I do today. Therefore, because Judaism is a religion of the future it is a religion of human freedom, and because Israel is a future-oriented nation, it remains, in the Middle East, an oasis of freedom in a desert of oppression. Tragically, most of Israel’s enemies are fixated on the past, and as long as they remain so, their people will never find freedom and Israel will never find peace.

I believe that we must honour the past but not live in it. Faith is a revolutionary force. God is calling to us as once He called to Moses, asking us to have faith in the future and then, with His help, to build it.

[1] See the insightful study by Richard Kearney, The God Who May Be: A Hermeneutics of Religion, Bloomington, Indiana University Press, 2001, pp. 20–38, from which these references are drawn.