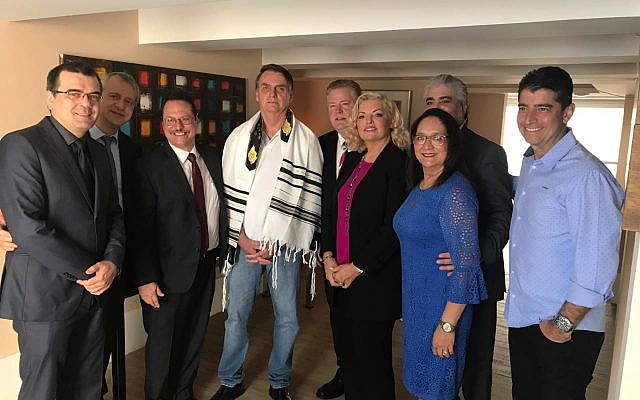 Faith leaders and president-elect of Brazil.

The role of evangelical leaders in the election of Bolsonaro was historical as it was with President Trump in the United States. Strengthening the ties with the US and Israel was a promise he made while running for office, and he wants to deliver.

This week, a group of pro-Israel faith leaders from the United States was in Brazil. Bolsonaro’s name is well known abroad, and they wanted an opportunity to show how much people in different places are supportive of him.

Mario Bramnick, president of the Latino Coalition for Israel, lead a team of evangelical leaders to meet with the president-elect as well as Brazilian political and religious leaders in Brasilia, where they met future cabinet members including Damares Alves, a lawyer nominated to be Secretary of Human Rights.

Bramnick believes Damares, who is also a pastor, “will do an amazing job as Secretary, fighting for Human Rights and religious freedom in Brazil and abroad.”

On the 20th of December, Mario, along with American pastors Jim and Rosemary Garlow, Ramiro and Orphalina Pena, as well as Albert Veksler, director of the Jerusalem Prayer Breakfast, had an opportunity to meet Bolsonaro and to spend an hour with him.

They talked about pressing issues regarding Israel and world politics and how similar the scenario in Brazil is to the US. Pastor Pena gave the president-elect a talit – a prayer shawl – thanking him for all his support for Israel.

Veksler stated: “We are thankful for president Bolsonaro’s stand for recognizing Jerusalem as our united capital and his promise to relocate the Brazilian embassy to the city.”

“We are very thankful for the opportunity to stand with president-elect Bolsonaro in solidarity with him. People of faith in the US are very aware of his role in the new political scenario in South America and are praying vigorously for his health and the prosperity of the nation”, celebrated pastor Garlow. His wife, Rosemary, said the “evangelical Christians of America are honored to visit Brazil and to stand with the elected government at this crucial moment.”

After the meeting, Pastor Pena commented: “We are very thankful to be here and to pray for Brazil. We love this nation and its people”. Pastor Bramnick stated the “we firmly believe that president Bolsonaro’s decisions will change not only his nations but also affect others in South America.

Brazilian pastor Josué Valandro that leads the church in Rio de Janeiro Bolsonaro’s family attend understands that “the moment Brazil lives is crucial for our future. I am delighted to see our future president taking bold stands in a country that suffered so long with corruption and leaders that tried to impose the socialist agenda”.

The Brazilian president-elect posted a picture of the meeting in his Instagram account commenting that he was thankful for all the support and prayers: “It is important for all of us to have faith.”