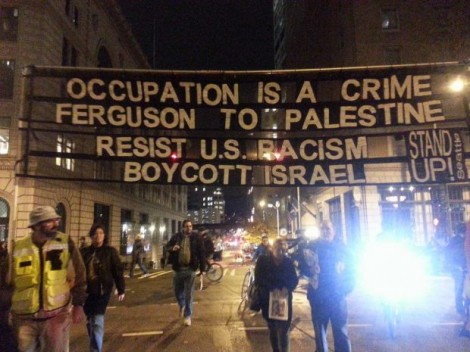 Hear, hear! The Jews are causing the riots in Ferguson. Don’t believe it? Look at this picture and read the story.

On Sunday, journalist Yael Veltzer, published an interview she held with me while I was in LA at the beginning of this month. In it, I warned that anti-Semitism is going to spread faster and harder than we think. This sign proves that I miscalculated; it’s happened faster than I predicted.

There is rampant anti-Semitism everywhere in the US. It no longer requires any reasoning, or as the reporter of this story from Seattle writes, “Upset with the verdict in Missouri? Then boycotting Israel makes perfect sense.”
This is the real face of anti-Semitism, pure hatred, requiring no justification. Anti-Semites blame Jews for everything that’s wrong with the world, and Ferguson is just more proof of it.

The problem is, though, that reasoning with people who put up such signs won’t help. You can’t convince them that Jews or Israel have nothing to do with the killing of an unarmed Afro-American by a white, Christian police officer. They feel in their guts that we are responsible, and go reason with someone’s guts!

As I said numerous times before, and as is elaborated in my book, Like a Bundle of Reeds: why unity and mutual guarantee are the call of the hour, we, Jews are responsible for the world’s afflictions in the sense that only we have the key to achieving unity and peace among people. Even if we’re unaware of it, it is rooted in our subconscious, and it is our task to reawaken that ability to unite and implement it among us.

But only at first do we implement it among us, because as soon as we’ve sparked that unity, we must share it with the world. And we must share not just the unity, but first and foremost the method by which to unite. Today this method consists of two elements: 1) Theoretical, which involves learning about the interdependent and interconnected nature of our world today. This will nurture in us the necessity to unite. 2) The method for achieving unity, which I call “Integral Education” because it educates us about the integral world we live in. This is what we have to learn and share.

And because this is what the world needs (it has enough smartphones), then once we provide it, we will be regarded as a blessing to the world rather than as a curse.

Please see a clip about this here.