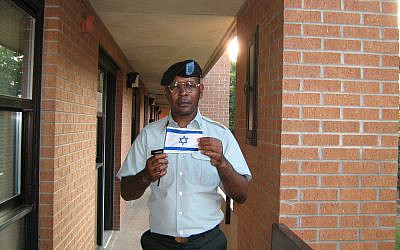 Barack Mandela, in the United States Army holding an Israeli flag, at Sheppard Air Force Base in Texas. (Personal Collection)

For the past few months, I have been listening to hardcore punk music, thrash music, speed metal, skater punk, and radical Leftist and anarchist bands.

Specifically, I am listening to the bands: D.R.I. (Dirty Rotten Imbeciles), The Sex Pistols, The Dead Kennedys and The Circle Jerks. I am moshing and slam dancing and thrashing in my living room while blasting aggressive punk and metal.

Some music scholars believe hardcore punk is a genre of punk rock music that originated in the 1970s; and traces its roots to the punk scenes in San Francisco and Southern California. However, there may be early elements of hardcore punk in the song ‘Helter Skelter’ by The Beatles in the 1960s.

This form of super radical, revolutionary music is a shock to my system since I grew up as a conservative Republican who strongly supported America’s powerful military industrial system and harsh prison system.

When I was a young teen, my heroes were President Ronald Reagan, Vice President George H.W. Bush, and Prime Minister Margaret Thatcher. My roots are on the Right.

As a child, I supported President Reagan’s elitist, top-down policies such as ‘trickle-down economics’, ‘lowering taxes for the rich’, being ‘tough on crime’, and ‘peace through strength’. I was taught to ‘lock up all the criminals’ and ‘invest in America’s military’ and that ‘America is the police of the world’ and ‘free trade and capitalism are the saviors of the poor’.

Not only was I a proud member of the Republican Party, I also served as special assistant and staff attorney to Governor Pete Wilson of California. Governor Wilson was known as a tough-on-crime conservative who opposed Affirmative Action and illegal immigration.

Afterwards, I served in the Israel Defense Forces (IDF) during the Second Intifada, then I served in the United States Air Force and United States Army. Thus, I was a conservative soldier, a right winger fighter, and a capitalist warrior. In the past, I was an arch-military version of Donald Trump and Benjamin Netanyahu.

However, I am now experiencing a radical, anarchist, hardcore punk revolution in my heart and soul. The old paradigms are being undermined by my new distrust of government power and authority and my desire for a ‘revolution of the poor’ and ‘uprising of the masses of marginalized peoples’.

In Israel, for example, poor Jewish citizens and poor Arab citizens should come together to form a new political party called ‘The Revolution Party’ (Mifleget Ha-Mapekha) that will subvert the dominant system of power by empowering the weak and oppressed.

The world military order—including NATO—must adopt the anti-violence, anti-imperialist, and anti-colonialism ethos of the hardcore punk movement. Let’s look at some of the ironic lyrics of the song ‘Draft Me’ by D.R.I.:

The fundamental rule of ‘The Revolution Party’ is: ‘no authority other than yourself’. This new radical political party—which will be established in the USA, Israel, Europe, Africa, Oceania, and Asia— will embrace a form of anarchism that is skeptical of all authority, control, and power.

The oppressive power of the state should be replaced by free associations and stateless societies not based on coercion and hierarchy. This philosophy is partially inspired by the early communalism of the ‘Kibbutz’ movement in Israel.

As I listen to the powerful music and themes of hardcore punk music, skate punk, and speed metal, I feel inspired help the poorest of the poor in their effort to escape the oppression of a heartless system of power.

Whereas in the distant past, I strongly identified myself with power of the establishment, I now embrace the revolution of the powerless. I raise my fist and cry: Power to the People and Fight the Power.