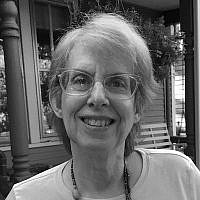 The Blogs
Eve Silberman
Apply for a Blog
Advertisement
Please note that the posts on The Blogs are contributed by third parties. The opinions, facts and any media content in them are presented solely by the authors, and neither The Times of Israel nor its partners assume any responsibility for them. Please contact us in case of abuse. In case of abuse,
Report this post.

“Stand Up to Anti-Semitism” urged the e-mail invite last spring. A week later, I stood on a suburban Detroit traffic strip, waving a homemade sign which read “Jewish Lives Matter.” Soon afterwards, I called a woman in my city active in Jewish affairs and suggested a meeting to discuss confronting anti-semitism locally.  “Things are getting ugly,” I said. “I’d like to do something.”

The Jewish groups behind the demonstrations were alarmed by the fury directed at Israel following Israel’s battle with Hamas. In “For Gaza” marches” protestors carried signs accusing Israel of “genocide” and sang, “From the River to the Sea/Palestine must be free,”which I think of as the “Israel-you’re-toast” song. In my city, Ann Arbor, hatred of Israel seemed to explode. More than 1000 protestors marched downtown, waving the Palestinian flag and, yes, singing the Israel-is-toast song. The main University of Michigan student government issued a statement condemning Israel—the latest in a series of volleys that included support for the BDS (boycott, divest, and sanctions) As usual, everyone denied they were anti-Semitic, just anti-Israel. But I was struck that the only country the students chose to group-hate was the Jewish state.

Raised in your standard liberal middle-class Jewish home, I’d marched against the Vietnam War in high school. Over the years, I’d demonstrated for gun control and abortion rights; joined vigils to protest death sentences; and, well into middle age, boarded a bus to D.C. to protest atrocities in Darfur. I also joined a temple and made my first trip to Israel. But though I knew anti-semitism was out there, it had rarely touched my life. Occasional incidents over the years, like a college classmate complaining “There are too many New York Jews here” were upsetting but fleeting. I knew I was fortunate. Police didn’t stop me for “Driving While Jewish.”Jews weren’t harassed for going into the “wrong” neighborhoods. Anti-Israel rhetoric was disturbing but Jewish college students could take care of themselves. Couldn’t they?

Then—the Trump era. Shocked, I paid attention to Trump’s anti-Semitic tropes. The image of Hillary Clinton and the Star of David. Jew-haters were coming out of the woodwork: those chants of “Jews will not replace us,” the vandalized cemeteries (one not far from me), the synagogue shooting. It was all a reminder of the stark cycle of Jewish history: acceptance, sometimes for centuries, and then, when Spain or Russia or Germany needs a scapegoat, persecution or expulsion. Mass murder.

A brand new foot soldier, I’m trying to figure out how I can best fight against anti-semitism. I am reinforced by the sage Hillel’s famous quote. I had tried to follow his mandate to think of others: “If only for myself, what am I?” Now I was paying attention to the preceding sentence. “If I am not for myself, who will be for me?”

Hillel got it right, and, finally, so had I.

About the Author
I live in Ann Arbor, Michigan, and recently retired as writer and profiles editor for the monthly Ann Arbor Observer magazine. I've freelanced for Hour Detroit magazine and the Detroit Jewish News and taught feature writing at the University of Michigan.
Related Topics
Related Posts
Comments