I recently went to Copenhagen with my wife for the first time. We decided as the shul was closed for renovations, we would schlep our Kosher Food and not try as all Israeli’s do, to find all to the Jewish things of the City. So, what happened, was the opposite. Jewish history found us.

A few days before going to Copenhagen, a lot of photos of the city started popping up on my Facebook page. These were posted by Yitzhak Meir Malek, a Musician influenced by and in the style of Reb Shlomo Carlebach, who was part of a joint initiative by the Israeli Ministry of the Diaspora and Ohr Torah Stone https://www.facebook.com/OTSAmielBaKehila/.To be 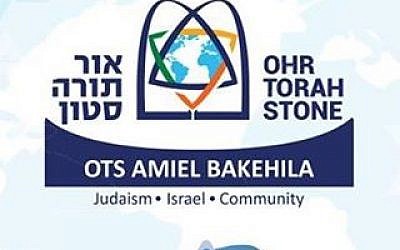 more correct the photos they were posted by Laura Ben David who did not stop tagging Yitzhak. Laura, who is a passionate speaker and author for Israel, is part of the OTS Amelia team that includes Yitzhak (a musician) and a Rabbi who together provide meaningful Jewish and Israeli content for communities in the diaspora.

Besides, trying to show the Joy of Judaism and the Achievements of Israel, the trips give support to the Local Communities from the young to the elderly. Programmes also include hearing the people speak about the incredible challenges they face in supporting Israel, in particular, with so much anti-Israel sentiment.

So, by the time we got to Copenhagen, we were treated to great photos showing the places we needed to go to. On our first morning, we decided to go on one of the free walking tours of the City. (well not so free as one is inspired to give a good  tip especially if one had a passionate well-spoken guide as we did). So, our young Lady guide takes us to a beautiful garden which is part of the National Library and attached to this is the Jewish Museum which is in a prime location. Our guide starts talking to about the 2nd World War, how the Nazis invaded Denmark, how Denmark was forced to accept Germany as an Occupier while trying to show some semblance of Resistance and independence. She then related how 99% of all Denmark’s 7,000 Jews were saved from the Nazi Final oppression plan, starting from the example set by the King – Christian X who became the subject of a persistent urban legend according to which, during Nazi occupation, he donned the Star of David in solidarity with the Danish Jews. This is not true, as Danish Jews were not forced to wear the star of David. However, the legend likely stems from a 1942 British report that claimed he threatened to don the star if this was forced upon Danish Jews. He did, however, later on, finance the transport of Danish Jews to unoccupied Sweden, where they would be safe from Nazi persecution.

A period of tension ensued, for the Danish population in general and its Jewish citizens in particular. Danish policy sought to ensure its independence and neutrality by placating the neighbouring Nazi regime. After Denmark was occupied by Germany following Operation Weserübung on April 9, 1940, the situation became increasingly precarious.

In 1943, the situation came to a head when Werner Best, the German plenipotentiary in Denmark ordered the arrest and deportation of all Danish Jews, scheduled to commence on October 1, which coincided with Rosh Hashanah. However, the Jewish community was given advance warning, and only 202 were arrested initially. As it turned out, 7,550 fled to Sweden, ferried across the Øresund strait. 500 Jews were deported to the Theresienstadt concentration camp. In the course of their incarceration, Danish authorities often interceded on their behalf (as they did for other Danes in German custody), sending food.

Of the 500 Jews who were deported, approximately 50 died during deportation. Danes rescued the rest and they returned to Denmark in what was regarded as a patriotic duty against the Nazi occupation. Many of non-Jewish Danes protected their Jewish neighbours’ property and homes while they were gone. (Credit – Wikipedia)

It was quite emotional to hear this story from our young guide who related with pride that her grandparents were part of the resistance.

Our Jewish connection did not end there. While looking for an outing for some quaint seaside village, I came across the village of Dragor which was a short single bus ride from our hotel. When I gave this brilliant idea of the outing to my wife, she told me in her research, Dragor was where the fishing boats related previously story took the Jews to safety. So, off we go to this very pretty seaside town and of course, there is a Museum, and with pride, the central story and exhibit is how the people of Dragor led by a Fisherman named Ejnar Larsen helped save the Jews. 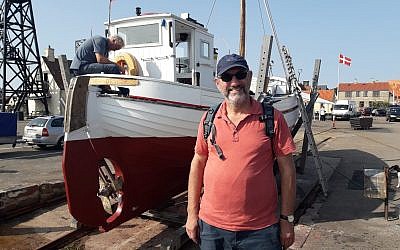 His small boat one of many used for the rescue is still in working order and is used daily to take visitors on a trip. My picture in this blog shows me standing next to the boat. Again, very emotional.

What struck me is the contrast between Denmark and Israel. Both have similar size populations and are both are innovative. The people on the surface do not have an existential threat and just enjoy life. We Israeli’s also enjoy life, and here there is a similarity. The Danes have a word called  Hygge (pronounced hue-guh, not hoo-gah) is a Danish word used when acknowledging a feeling or moment, whether alone or with friends, at home or out, ordinary or extraordinary as cozy, charming or special.

It literally only requires consciousness, a certain slowness, and the ability to not just be present – but recognize and enjoy the present.

So, whether it’s making coffee a verb by creating a ritual of making it every morning to a cozy evening in with friends where you’re just enjoying each other’s company to the simple act of lighting a candle with every meal, hygge is just about being aware of a good moment.

We Jews have Shabbat – where we light Candles and try to be intimate with our family and Friends and live in the moment and peacefulness of Shabbat.

So, wishing you a Hygge (Heilige) Shana Tova.