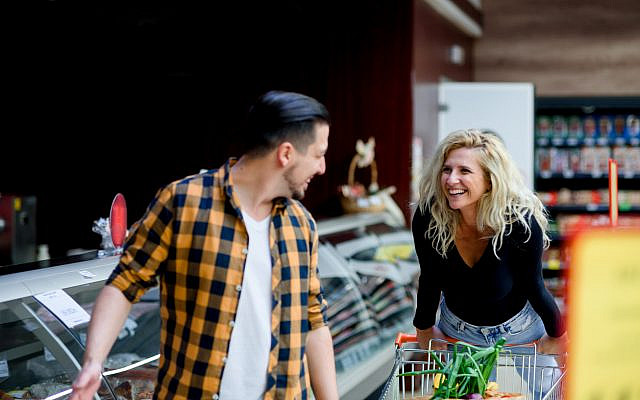 ‘Listen, there’s a really cute guy in aisle 5. He’s a little too short for me, but I think he’d be perfect for you. And from what I saw in his cart, the guy seems wild about pasta. Nu, what are you waiting for?”

Concern over the alarming rate of singles within the Jewish communities throughout the world is being expressed throughout the media. That this is most certainly an expected result coming from the greater freedom that women now have in pursuing careers throughout the professional spectrum, it is nonetheless somewhat troubling that the nuclear Jewish family may be in danger due to changing paradigms. Which is why, I guess, efforts are being made to find innovative ways to encourage youngsters to meet each other and, hopefully, enter into meaningful lasting relationships. The time has come, perhaps, to take another look at what was once a reasonably successful dating technique.

Trends and fads, we all know, that take off in the United States, Germany, Australia, France, and Great Britain are bound to be a hit here in Israel too, sooner or later. But it’s not only entertainment, technology, and fast-food franchises that ultimately make their way to this part of the world. Social activities and practices, too, are not infrequently adopted for local use on the premise that what has proved successful in London, Sydney, and Chicago should certainly work just as well in Tel Aviv, Jerusalem, and Haifa. Which is why those concerned over the difficulty many of our local singles are currently having finding their special someone should take more than a passing glance at the rather inventive and novel way of twisting fate that was immensely successful during the earlier years of this century. Throughout the world, supermarket dating nights became increasingly popular with young singles — and even some not-so-young singles.

True, it may seem that flirting over sacks of laundry detergent or exchanging numbers while waiting for the butcher to call your number sounds a bit whimsical, but shopping for both dinner and a new partner — judging from the impressions of those who participated in this aisle-hopping rite — introduces an intriguing fusion of romance and romaine. And in fact, the admittedly non-scientific surveys that were conducted suggest that this is more than a basket case of an idea.

Consider, for a moment, the flaws inherent in other dating schemes. Speed-dating, for example, forces superficiality on its participants, and engaging a professional matchmaker almost inevitably puts marriage-minded youngsters through a frustrating and exasperating experience. Whereas randomly bumping into somebody in an informal setting like a supermarket — something like finding your bashert while looking for borscht — makes it much easier to break the ice and enhances the likelihood of finding that seemingly elusive personality you just know has to be out there. Indeed, such potentially enchanted evenings had become regularly scheduled events in many locations and numerous blogs were routinely posted in which “meet and greet” tips and ideas — those considered successful, as well as those that should best be, well, left on the shelf — were discussed and debated.

Those who participated in these outings enthusiastically debated as to which was the best approach. While more than a few argued that idly wandering through the aisles held the greatest promise, a preferred and apparently proven method involved lingering nonchalantly in some strategic location to survey who was manning — or womaning — the carts. There were still others who ardently promoted staking out the food sampling spots, since they provided a very natural opportunity to stop for a few minutes and engage in conversation. It’s not at all unlikely, they pointed out, that evaluating the merits of some new yogurt or eggplant salad can lead to bigger and better — if not tastier — things. And let’s not forget about the checkout counter, which truly offers real possibilities. But, alas, not for novices; practiced movements and meticulous timing is often necessary to get in line right behind someone you’ve surreptitiously been keeping an eye on.

Encouraged by the reports that were floating through cyberspace, an effort to bring this concept to Israel was initiated by several mothers who wanted very much to see their adult-but-not-yet-married children settle down. A number of singles email groups, in addition, were created to facilitate a discussion on the merits of this rather quirky, but nonetheless innovative approach to dating. While there was some understandable hesitation about how workable the idea was, there most certainly was interest and the response was, for the most part, positive.

A number of local supermarket chain owners had, in fact, been contacted about their willingness to engage in playing Cupid. If for no other reason than publicity — and the chimes of ringing cash registers — there was readiness in a family-size way.

The rules of the game are relatively simple. In some cases, the supermarket provides an evening dedicated solely to those in pursuit of something other than what’s customarily shoved into refrigerators or pantries. In other cases, where floor space is shared with regular customers, a sign of sorts separates the seekers from the shoppers. Those on the prowl may tie a ribbon around a shopping cart, or strategically placed cereal boxes might provide the green light. Unless you see, for example, cornflakes prominently placed and rooster-side up — look elsewhere.

From the feedback and analyses that were then conducted, it is clear that during these events, the contents of a basket can be as important as appearances. Dependable, stay-at-home types generally go for wholesome cereals such as bran flakes or muesli, while flighty, more spontaneous personalities prefer the colored, sugary stuff. The guy who studiously mulls over the pricey, high-profile wines generally merits greater consideration than the one who throws two or three six-packs of the cheapest beer into his cart. And, needless to say, should there be a ribbon tied around a shopping cart brimming over with diapers and Bamba, well, some thinking is required.

Television, no doubt, will enthusiastically embrace this 21st-century version of The Dating Game. In addition to Srugim — the popular new series that tracked the trials and tribulations of religious singles longing to dance at their own weddings — locally produced soap operas will surely develop episodes around receiving a warm feeling by the cold cuts counter or having beautiful friendships blossom while squeezing lemons. It takes no more than a little imagination to foresee typical romantic settings — candlelit dinners, strolling violinists, heart-shaped boxes of chocolates — replaced by noshing on some chips while strolling through the aisles past candy-bar wrappers that feature cows infected with salmonella and tripping over ill-mannered supermarket personnel stocking shelves.

The idea, unfortunately, never took off here, and eventually died out elsewhere as well. No matter. The whole idea of having things click by the crackers or exchanging introductions while slicing bread sounds like fun. There’s no reason that someone enterprising and energetic should not try and reintroduce it to the Israeli young and young-at-heart community. And if you’re single and going to the supermarket anyway, no harm in trying to find something (or someone) that’s indeed worth picking up.

About the Author
Born and raised on New York’s Lower East Side, Barry's family made aliya in 1985. He worked as a Technical Writer for most of his professional life (with a brief respite for a venture in catering) and currently provides ad hoc assistance to amutot in the preparation of requests for grants. And not inconsequently, he is a survivor of stage 4 bladder cancer, and though he doesn't wake up each day smelling the roses, he has an appreciation of what it means to be alive.
Related Topics
Related Posts