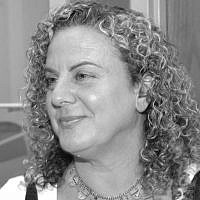 The Blogs
Dina Elenbogen
Apply for a Blog
Please note that the posts on The Blogs are contributed by third parties. The opinions, facts and any media content in them are presented solely by the authors, and neither The Times of Israel nor its partners assume any responsibility for them. Please contact us in case of abuse. In case of abuse,
Report this post.

“It’s enough that you’ve come,” Orit tells me, when I hand her the Murano glass I gathered in the Jewish Ghetto in Venice.

We had circled the town of Rishon L’Tzion to find my former Ethiopian Israeli student. We drove hours in maddening traffic and June heat. In Rishon, confused by the new neighborhoods, our only hope of finding her family home was mentioning their name and street, to any black-skinned citizen.

I have been doing this for a quarter of a century, circling the country and town in order to keep the connection.

This time I almost gave up. Night was falling and my husband, the driver, was losing patience. My 16-year-old daughter took over. “I think we’re close,” she said, jumping out of the car with me, “let’s not give up.” The next Ethiopian woman we approached suggested we ask someone at the synagogue. Finally, a young man led us to the family home.

Days before, as I roamed the narrow streets of Venice looking for Murano glass, I thought of the twigs Orit had once worn in her ears and how I replaced them with beaded earrings from the shuk in Jerusalem. I also gave her the first letters and words of my language. We shared friendship that, by the time I left Israel for America, had blossomed into sisterhood.

I’ve continued to wonder, decades now, what she truly needed to make her life in Israel easier. Once, when I was a poor, writing instructor in Chicago, she asked me for something I couldn’t give her.

Thirty years ago, Orit, her family and 7,000 other Ethiopian Jews, trekked from Ethiopia to Sudan where after months in transit camps they were airlifted into Israel with Operation Moses. I met Orit in Ma’alot, a then small development town in the north of Israel, where her family lived in an absorption center. I was struck by her hunger for learning, her graceful silence. We braided each other’s hair, and sat together tentatively speaking Hebrew.

I have held onto Hebrew for the past thirty years so I could reach her.
But she did not answer my recent letter or pick up her cell phone when I called upon my arrival in Israel. I have been away five years, and the time before that more than a decade.

At her family home where her parents and various siblings have lived since they left Ma’alot in 1989, we were greeted by squeals and kisses from her mother. Orit’s father was wrapped in a gray blanket, surrounded by elders in traditional white shammas. Orit’s youngest sister Tova explained that her father had just returned from the hospital, an operation to remove cancer. The women offered us their chairs which we refused along with Orit’s mother’s offer of injera. Not wanting to impose or intrude, I asked Tova to take us to Orit’s apartment, a few blocks away.

As a young woman I would return to Israel every other year, then every few years to visit my beloved country, the place I ultimately chose not to live, the land where Orit had no choice but to make her home.

When I finally reached her at the entrance to her apartment and held her thin frame she said, “I thought you had forgotten Eretz Yisrael.” I told her how hard it is to get to Israel these days with our jobs, two teenage kids and the cost of things. She said it was impossible to do anything with two small children, one on the way, a job at the bank, and now a sick father.

I think but don’t say, I thought you had forgotten me, the young woman who circled the streets of Rishon when your family moved there from Ma’alot, who later climbed the hills of Romema to visit your dorm room at Haifa University, the summer we discovered we are both poets and love Amos Oz novels. Five years ago, after an eleven year absence, I found you married, in a home of your own with two small daughters, gainfully employed, one foot in both worlds.

I do not tell her how clearly I remember the twelve-year-old immigrant in afro and hand-me-down Israeli clothes.

As I clasp Murano glass around her neck, one from each generation of women sit in her modern home with a large-screen TV, Ethiopian art, where she serves us spaghetti and eggs and hands us Eden mineral water and Bamba for our ride back to Tel-Aviv — I realize what I’ve forgotten.

It is enough that I’ve come. That she opened the door.

About the Author
Dina Elenbogen, an award winning and widely published poet and prose writer, is author of the memoir Drawn from Water: An American Poet, an Ethiopian Family, an Israeli Story (BKMK Press, University of Missouri April 2015) and the poetry collection Apples of the Earth (Spuyten Duyvil, NY). She has a MFA in poetry from the Iowa Writers Workshop and teaches creative writing at the University of Chicago Graham School. She lives in Evanston, Illinois with her husband Steve Siegel and their two children Sarina and Ilan For more information visit her at www.dinaelenbogen.com
Comments