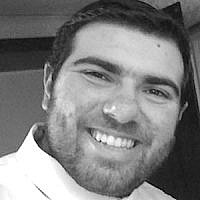 The Blogs
Dov Winston
Apply for a Blog
Advertisement
Please note that the posts on The Blogs are contributed by third parties. The opinions, facts and any media content in them are presented solely by the authors, and neither The Times of Israel nor its partners assume any responsibility for them. Please contact us in case of abuse. In case of abuse,
Report this post.

I always lose my glasses. I rarely wear them, but it seems that whenever I need them I have trouble finding them. Once I find them and put them on, I often look in the mirror to see if it is possible for me to look even more “hipster” this time around. I usually do. This time of year I am usually looking into a different kind of a mirror. Yet this mirror is metaphorical, this is a mirror of self reflection, a mirror of recollection.

I haven’t always been religious. Most people look at me and would never think that. Clad with my beard and kippah (head covering), most people view me as your classic “frum from birth.” Well, I’m not. I grew up in a religious home but for many years I left that lifestyle. I remember the sparkle in my eyes as I returned to a religious way of life. My proverbial glasses tinted with rosiness as a I viewed everything in Judaism to be so pure and sweet. This was not very many years ago, yet it feels like a lifetime ago.

Over the years, I learned a lot more about Judaism and became a dedicated religious Jew. Most people would never realize that I spent years outside of a religious lifestyle and in many ways that makes me proud. I “play” the part quite well and I have even developed the necessary skepticism that every religious Jew seems to be born with. If I learned anything over the years it’s that my idealism, my rose tinted glasses, were fraught with naivete and simplicity. Continued years of education has taught me to not be simple. Everything is a complex process, a maybe or a probably, so rarely am I convinced to say yes or no.

I believe this to be the highest form of human intellect. Tension and contradiction is our very nature. R’ Moshe Chaim Luzatto, a great 18th century scholar, speaks of the conflict that lies within the nature of mankind. All creations are either holy or mundane, but mankind is both. Body and soul are both important parts of the makeup of humans. Many people will try to spend their lives resolving this tension, attempting to find the answers. But the point of life is often to attain clarity within the confusion, not outside of it.

This is why Rosh Hashana is very difficult for me. We are supposed to reflect, make changes and be everything that we were not in the previous year. But, every year as I go into Rosh Hashana I feel a sense of repetition. “We must atone for our sins of the previous year,” or my personal favorite, “This year will be different!” It almost never is! Every year as I hear impassioned pleas from rabbis and communal leaders to make changes in my life, I become skeptical, tuning them out and knowing that I could listen to the recording from last year to know what they are going to say.

As sophisticated thinkers how are we to understand or connect with a holiday that is all about turning away from the reality that humans rarely change? I’ve struggled over this question for years and as I’ve dug deeper every year to try and find the answer I realized that I was looking at it all wrong. I do not need “the” answer, I just need my answer.

There was once a time in all of our lives where we viewed the world with optimism and idealism and not “realism” and skepticism. We have all owned rose tinted glasses at some point in our lives. Rosh Hashana is about dusting off the glasses, not to be naive, not to be simple minded, but to remember that you once believed in yourself enough to be an astronaut, a firefighter or an explorer. And if you once believed in yourself, then even though so much has changed, perhaps you can learn to believe in yourself and in the world again. Rosh Hashana is not about closing our eyes to reality, it is about seeing reality but knowing that there is so much more that we can be. And perhaps this year if we really try we won’t lose our glasses.

About the Author
Born and raised in New York, Dov never really considered himself a New Yorker. He studied in Yeshivat HaKotel for two years and went on to to do his undergrad degree in Yeshiva University. He is currently in rabbinical school in YU. His two passions are helping people believe in their own greatness and uniting the Jewish people!
Comments