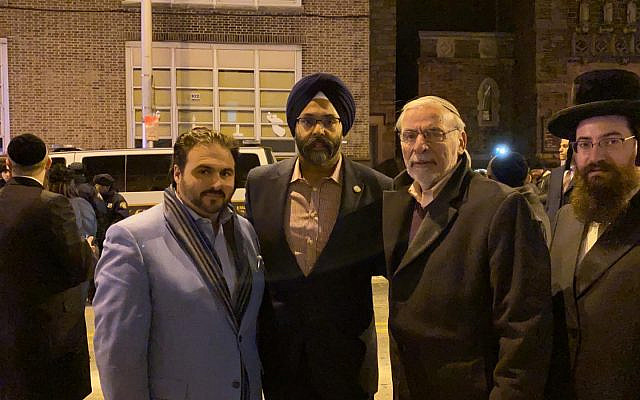 Last night marked the first night of Hanukkah for Jews all around the world but for the Jewish community of Jersey City it was also 12 days after the brutal terrorist attack against their community in the Greenville section of Jersey City, NJ.

Dov Hikind, former NYS Assemblyman of 36 years and now the founder of Americans Against Anti-Semitism and I attended last night to visit with the local community members, to walk the streets and to pay our respects to the families that lost their loved ones.

As Jews around the world gathered to light the menorah for Hanukkah, I and other members of @americansaa went to Jersey City to light with the community reeling from the recent terror attack.

The message is the same everywhere: the Jewish people will prevail in the face of evil! pic.twitter.com/tC8XMYQOv0

As I looked out into the crowd, I saw a lot of black hats but I didn’t see any Secular Jews and that is a real shame. Why are secular Jews afraid to stand up for the observant community? I can tell you first hand that when I walk into observant communities, I am welcomed with open arms, warmth and love.

As I’ve stated over and over again, when those with hate in their heart target and murder us, they don’t care if we are observant or secular Jews. They don’t discriminate – they see us as Jews. Why must people within the Jewish community seek to divide us when we must be united to fight back the evil that is on our doorsteps?

As the ceremony proceeded, the menorah lighting honored Officers Raymond Sanchez and Mariela Fernandez, who were injured while heroically responding to the scene. Cantor Yoely Greenfeld, brother of shooting victim Mindy Ferencz, chanted the blessings and sang traditional Hanukkah songs.

“In the face of great darkness, our answer is an increase in light,” said Schapiro, who co-directs Chabad of Hoboken and Jersey City. “And what better time for this message than Hanukkah, when we celebrate the triumph of light over darkness, and freedom of religion over tyranny and hate.”

One thing is clear – we, Jews, must be united against anti-Semitism. There is no room for division amongst Jews.

We must unite together so that the memory of the 6 million Jews we lost in the Holocaust never fades from history. We must act to secure the future in the face of the rising anti-Semitism. With strength and unity, we must act to fight this hatred wherever it rears its ugly head. We must push back against elected officials who think that it’s appropriate to loosely use terms like “concentration camps” and “Never Again.”

We must come together with one voice to loudly proclaim anti-Semitism has no place in America.  It’s imperative that we unite together before it’s too late and more Jewish blood is spilled on the streets of America.