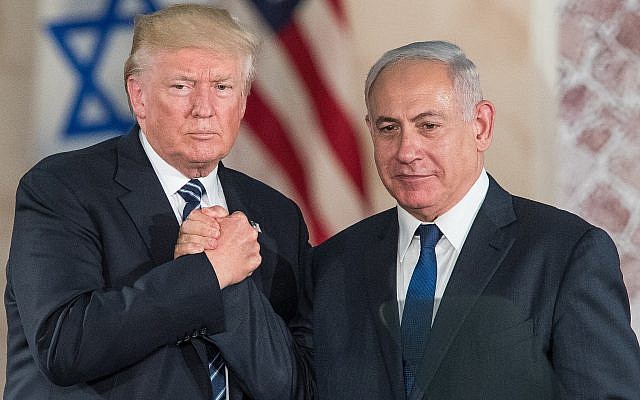 US President Donald Trump, left, and Prime Minister Benjamin Netanyahu shake hands at the Israel Museum in Jerusalem on May 23, 2017. (Yonatan Sindel/Flash90)

“The United States seeks to assist in the establishment of comprehensive and lasting peace in the Middle East, to be negotiated among those living in the region. We oppose any measures intended to impose an agreement or to dictate borders or other terms, and we call for the immediate termination of all US funding of any entity that attempts to do so.” — 2016 Republican Party Platform.

This paragraph was exceptionally novel and taken by Israelis with a sense of relief after American administrations, both Democrat and Republican, imposed their plans on Israelis and Palestinians. Presidents Bush (I) and Obama had even punished Israel for not going along with their proposals.

The Trump administration clarified their take on the party platform by finessing the words “assist” and “opposing an imposition” to allow for an American created plan as a “suggestion.” As President Trump’s adviser to Israel, Jason Greenblatt said, “[The Trump] plan will not be a ‘take-it or leave-it deal,’ but will be one where both sides will have to come together in person, and engage in tough negotiations to work out a solution.”

Among presidents, President Trump has taken the lead as the most supportive American president of Israel. Even his harshest critics must admit that no one in the Oval Office has done so much to support Israel. The list of policies and achievements are long and the President’s popularity among Israelis is just one indicator of how supportive the Trump administration has been to Israel.

As the rumors become more and more detailed, it seems that the “Deal of the Century” is an Israeli dream come true. It gives Israel sovereignty over much of Judea and Samaria and puts the onus on the Palestinians to become a peaceful nation that recognizes Israel as a Jewish state, with Jerusalem as its capital and refuses to allow for terrorist organizations to be part of its society.

Yet, I have a few concerns. First among them is how will the plan be presented? Will it stay loyal to the Republican platform that commits to assist and not impose, or will we see more finessing of the language to strong suggestions, or worse, a deal that neither side can refuse?
Second, the deal allows for a Palestinian state. Jared Kushner said, “There will be tough compromises for both,” in the deal. Setting aside a major issue I have with Americans telling Israelis and Palestinians what they must and must not do, a Palestinian state isn’t a “tough compromise” for Israel. It is a recipe for more terror attacks, rocket attacks and bringing Iran’s influence closer to Jerusalem. Even the late former Israeli Prime Minister Yitzchak Rabin never considered a Palestinian state when negotiating the Oslo Accords. The Palestinian Authority spends upwards of $350 million a year incentivizing terror, can we even fathom what they’d do as a state?! While the conditions on the Palestinians gaining statehood seem unachievable for the Palestinians, years from now future administrations will omit the conditions and state that all administrations, including the Trump administration, supported the creation of a Palestinian state.

Third, and this returns to an earlier mentioned point, wouldn’t the Trump administration be serving American interests, and Israelis and Palestinians, better by offering incentives to come together for direct negotiations rather than releasing a plan that without direct negotiations isn’t going to become implemented? Especially now, in the middle of Israeli elections, why would the Trump administration pen itself to charges of meddling in Israeli domestic affairs? What is the imperative to releasing this plan now?

As I wrote earlier, the Trump administration has been the most supportive administration to Israel since Israel’s founding in 1948. The foundations of this plan take the Trump support of Israel to an unimaginable level. Israel couldn’t have dreamed of some aspects of this plan being considered, let alone included, in an American peace plan. We’re nothing but grateful for this plan and the recognition of Jewish towns in Judea and Samaria. The next few weeks will tell just how helpful this plan will be to America’s interests and Israelis and Palestinians.