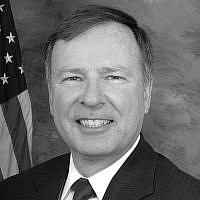 The Blogs
Doug Lamborn
Apply for a Blog
Please note that the posts on The Blogs are contributed by third parties. The opinions, facts and any media content in them are presented solely by the authors, and neither The Times of Israel nor its partners assume any responsibility for them. Please contact us in case of abuse. In case of abuse,
Report this post.

A new Israeli coalition and government is taking form. Warnings have surfaced regarding the right-leaning government and its ability to cooperate with the Obama Administration. The chief worry on the mind of the White House is the hawkish character of this Israeli government that, in their mind, may hinder any efforts to reach a solution to the Palestinian-Israeli conflict.

Recently Under-Secretary of State Wendy Sherman indicated that the U.S. support of Israel in the international arena will depend on whether the new government will meet the administration’s expectations on support for a two-state solution. This was a hint that the President might support a U.N. Security Council resolution to force Israel’s withdrawal from the disputed territories.

Speculations on this change of policy are not new to the Administration. Last December, Secretary of State John Kerry chose to remain ambiguous and refused to clarify whether the U.S. will use its veto power in the U.N. Security Council to thwart unilateral action by the Palestinians. The resolution failed so the hinted threat was never tested.

This should really worry anyone who wants to see stability and quiet between the two parties in our lifetime. A forced solution to the conflict will not bring the two sides closer but would only generate more tensions and conflict.

A basic condition for the success of negotiations is that each side has an incentive to negotiate. Every party must believe negotiating will allow it to reach chief goals and therefore render some concession worthwhile and profitable. A resolution that will dictate a solution to the conflict will remove this element for both sides.

Dictating the borders or a time of Israeli withdrawal from the territories will allow the Palestinians to achieve the majority of their feasible goals. However this will remove any incentive to compromise on the remaining issues. This will undermine any hope of moderation or the recognition of the state of Israel.

This should not be left to President Abbas’ good will. Abbas’ record on incitement against Jews and Israel does not seem promising. More importantly, portrayed by State Department as the last moderate leader and over 80 years of age, the question remains what will happen the day after Abbas.

Israel for its part will hardly be persuaded into cooperation with a forced resolution. Failure to follow a Security Council resolution will likely bring about additional pressure to the little state. Yet, as Israel learned many times before, conceding land and following U.N. resolutions does not secure the international community’s support. Sadly it may also carry a heavy price of lost lives. The last war in Gaza serves as a good example on both accounts.

Faced with the current impasse it seems wise and necessary to review and revise our policy. Here are some suggestions:

Having two states living side by side may be the end result of the conflict, and it may not. What is clear is that prematurely confining the negotiations to one final result constrains the flexibility of both parties, and makes finding a solution all the more complicated.

Prime Minister Netanyahu’s remarks on the feasibility of a two-state solution reflect what any observer of the conflict realized long ago. Neither side is ready to sign a final clear-cut treaty to end the conflict. Insistence on such a demand frustrates all parties and portrays the failure to achieve that goal as political incompetence and failure. Our aim should be incremental steps of increased political, economic and security cooperation between Israel and the Palestinians. This is in both parties’ interest — and ours.

Recently the Palestinian Authority declared a boycott on basic Israeli products. At the same time the Boycott Divestment and Sanctions (BDS) campaign has been gaining traction not only in Europe but here in the U.S. as well. Such actions are not helpful; they feed the incitement and radicalization narrative that rejects any understanding between Israelis and Palestinians.

Some will challenge that conditioning transfer of funds to the Palestinian authority and UNRWA upon compliance will cause instability in the west bank, however we can’t a become hostages of our own policy. Allowing American funds promote incitement of young students will prove destructive to our policy on the long run.

5. Incentivize business and economic cooperation between Israelis and Palestinians in the private sector realm.

Creating grassroots cooperation and mutual business dependence may result in pressure on the political leadership of both sides for stability and quiet.

These steps will not bring an immediate solution. However as Van Gogh once said: “great things are not done by impulse, but by a series of small things brought together.” Surely Van Gogh was speaking of art; successful foreign policy is in fact a form of art.

About the Author
Doug Lamborn, a Member of Congress from Colorado, is a member of the House Armed Services Committee and co-chairs the bipartisan Congressional Israel Allies Caucus
Comments