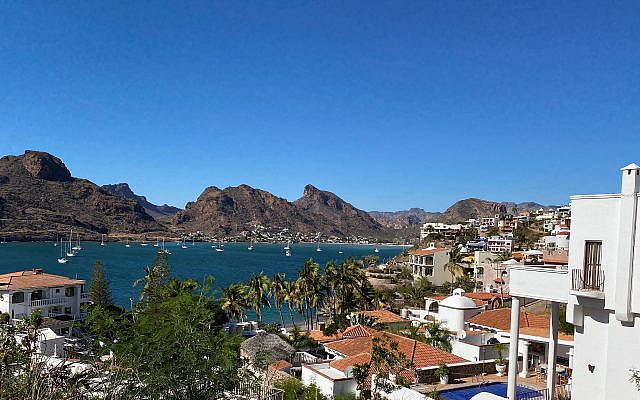 There’s irony in the exodus of well-heeled American baby-boomers to the world-class coastline of the Sea of Cortez at San Carlos. This charming, traditional, religious Mexican fishing village transformed to older hippie haven couldn’t exhibit a more distinct clash in culture. American ex-pats, for example, who supported removing the Ten Commandments from courthouses, cringed at the mention of God on their money, and filed suit to ban nativity scenes now find themselves in San Carlos converted instantly to generous free-thinkers.

“It’s a wonderful and ancient part of their culture,” the newcomers graciously consent, going so far as to learn how to say “Merry Christmas” in Spanish and ditching the secularist “Happy Holidays.” Even more astounding, they’re just as friendly and admiring of Mexican police, even as the area is patrolled ceaselessly by soldiers, sailors, marines, state and municipal officers, in battle gear and moving in convoys of armored personnel carriers. Back home the police were constantly accused of being racist murderers; here and now the jack-booted, semi-automatic rifle carrying Mexican version are viewed as protectors. Opening prison doors, allowing shoplifters to steal at will, doing away with a criminal’s bothersome bail—all of that is left behind in the nation they’ve quitted.

Then too, the people of San Carlos are still untouched by the lurid, decadence having swept over the world by the self-indulgent avant-garde. Young women are innocent enough here to still stroll holding hands, children obey their parents, and the towns’ fathers aren’t considered patriarchal bullies but the most respected people of the community. There are no parading heterosexual, homosexual or any other cadre of sensualists foisting intimate lifestyle choices onto the public forum, making children and families watch. And, the townsfolk know of only two genders, just like there’s always been.

The Americans in San Carlos happily fall right in line with all this, sane enough not to want to draw attention to the burnt-out, bankrupt cities of their former lives, the towns they’d had a hand in bringing down with their folly of supporting extremist politics, taken in by the sleight of hand as liberalism slowly but inexorably went from “cool” to creepy during their lifetimes. Not the Americans moving to Israel though; that’s a different story.

American ex-pats in Israel haven’t learned a thing though, bringing with them the same political ideology that has destroyed their former homes in New York, Philadelphia, San Francisco, and Baltimore. Indeed, they’ve created liberal pockets in Tel Aviv and other cities, voting just the way they voted in the United States: for anything and everything with the potential or certainty to weaken or destroy their new home. Many American-Israelis, for instance, joined the coalition that ousted Benjamin Netanyahu  from power in 2021, hoping to pave the way toward appeasement with the very forces which have promised to march every Jew in Israel—including them and their families—into the sea.\

Jewish-American baby-boomers are still pretending, lock, stock and barrel, and a self-important stiff arm toward Israel, even among those who now live in Israel, is the look they’re going with to the bitter end. And that certainly includes not just giving the cold shoulder to Israel but to everything embodied by the Jewish state.

An incomprehensible look at the tally of political leaders in the party a whopping three-quarters of the Jewish-American electorate has supported for decades includes a long list of names that can hardly be associated with any sort of “thumbs up” among Jewish voters: Rashida Tlaib, Al Sharpton, Keith Ellison, Ilhan Omar, Linda Sarsour, etc. Among newly-minted Israeli citizens from the US so familiar with such politics of self-abasement, it’s easy to accept their support for the powers that wish to rend their nation in two. They’re “privileged,” they’re to blame, they’re sorry, they need to make amends, even at the expense of making their new country smaller, more vulnerable, imperiled.

The Law of Return gives the right to any Jew anywhere to immigrate to Israel as an “oleh,” an immigrant. With new citizens such as many of those from America though, perhaps a Solomon-like Israeli jurist might look for a loophole in the edict.

About the Author
David Nabhan is a science and science fiction writer. He is the author of "Earthquake Prediction: Dawn of the New Seismology" (2017) and three other books on seismic forecasting.
Related Topics
Related Posts
David Nabhan