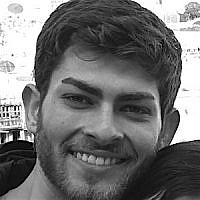 The Blogs
Mikha Feldman
Apply for a Blog
Advertisement
Please note that the posts on The Blogs are contributed by third parties. The opinions, facts and any media content in them are presented solely by the authors, and neither The Times of Israel nor its partners assume any responsibility for them. Please contact us in case of abuse. In case of abuse,
Report this post.

Israel is a land I have known my whole life, a land I have always loved and cherished. Had it not been for Israel, my father may not have escaped anti-Semitism and oppression in the Soviet Union, and so I would not be alive, today. Less than a year ago, I took my first steps towards becoming an active Israel advocate. After returning home from an emotional and inspiring Birthright trip, I realized that my connection with the land of Israel and the Jewish people was something greater than I could elaborate with mere words. I realized that there was no greater time of importance to defend the land I love, the land that myself and all of my people can forever call home. I decided to become involved in my campus’s pro-Israel community, and I found myself a home on the Leadership Board here at Hillel at Florida State University as the Community and Israel Relations Chair.

Over the past several months, the Leadership Board and I have fought tooth and nail to promote a pro-Israel environment and to oppose any anti-Israel legislation that has found it’s way to our capitol city. Each year, AIPAC honors three universities whose on campus initiatives go above and beyond and exemplify the message of AIPAC. Lead by our AIPAC campus liaison and Assistant Student Director of Hillel at FSU, Elyssa Ronik, our university was chosen as a showcase campus, one of a select few in the nation. The pro-Israel activists at Florida State University have completely transformed the culture regarding Israel and the United States-Israel relationship on campus. To further exemplify a unified front for Israel, a leadership statement was created and signed by over fifty student leaders, who represent a wide variety of organizations, to affirm our university’s unwavering commitment to Israel. In an effort to show bipartisanship, we created a partnership with our rival school, the University of Florida. Enlisting the help of Gators for Israel and their President, Matthew Epstein, we created a video displaying that no politics and no rivalry would obstruct our goal of supporting Israel. Perhaps most importantly, student activists at Florida State worked directly with members of the Florida Senate to (unanimously) pass Senate Bill 86, a bill that will prevent the state of Florida from doing business with any company that participates in a boycott of Israel.

About the Author
Mikha Feldman is the Community and Israel Relations Chair at Hillel of FSU, a Hasbara Fellow and an Israel advocate.
Related Topics
Related Posts
Mikha Feldman
Comments